On Wednesday 11th June we visited the Harley Davidson Museum in downtown Milwaukee after having my bike serviced at Hals Harley in West Milwaukee.  The museum was opened in July 2008 and still attracts more than 300,000 visitors each year.   It has more than 450 motorcycles on display and tells chronologically one of the greatest ever engineering and loyal customer integration stories ever created by an auto company. 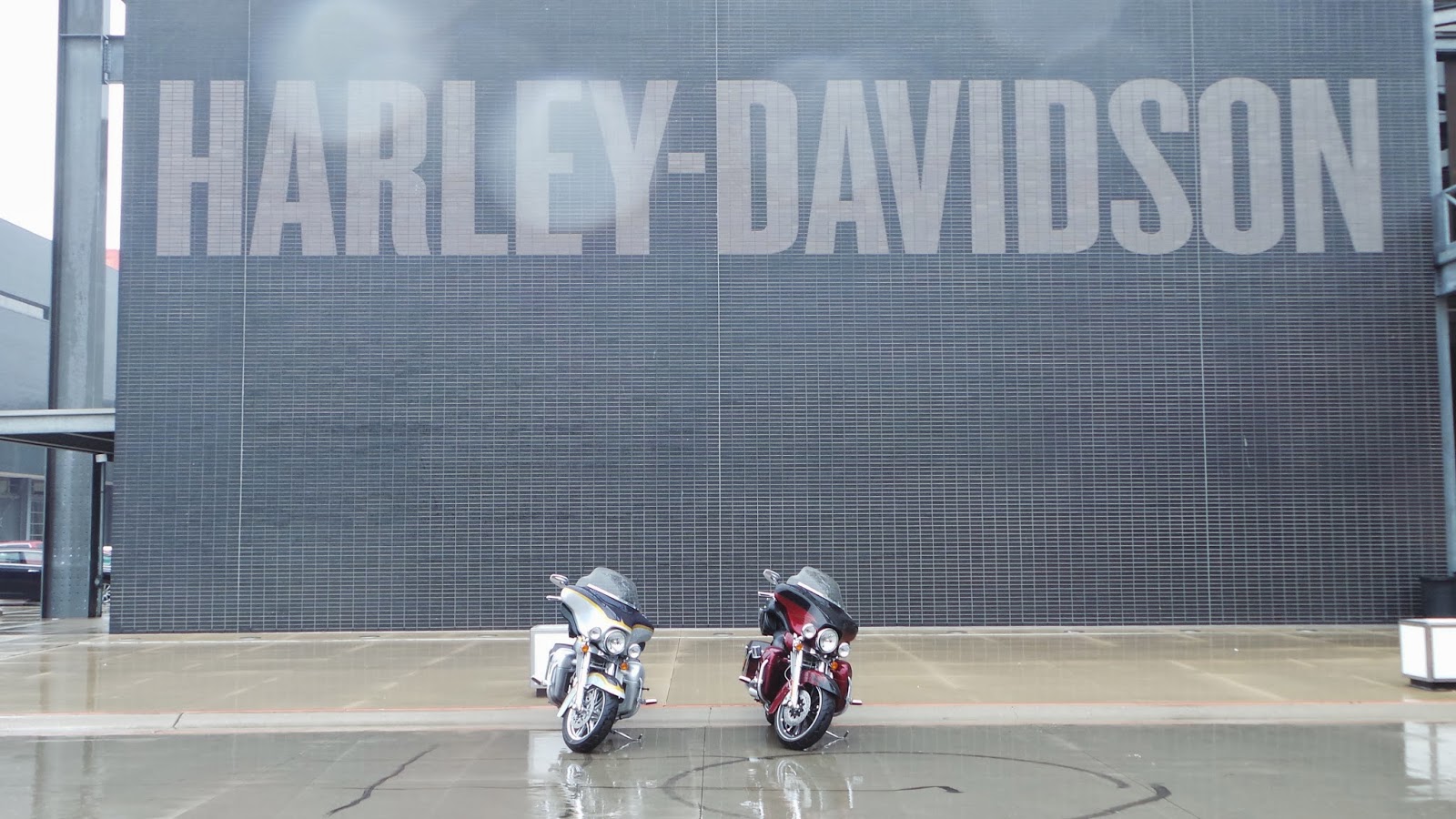 Clearly with the down-pouring of rain only the brave (or stupid) ventured out to the museum on their bikes. 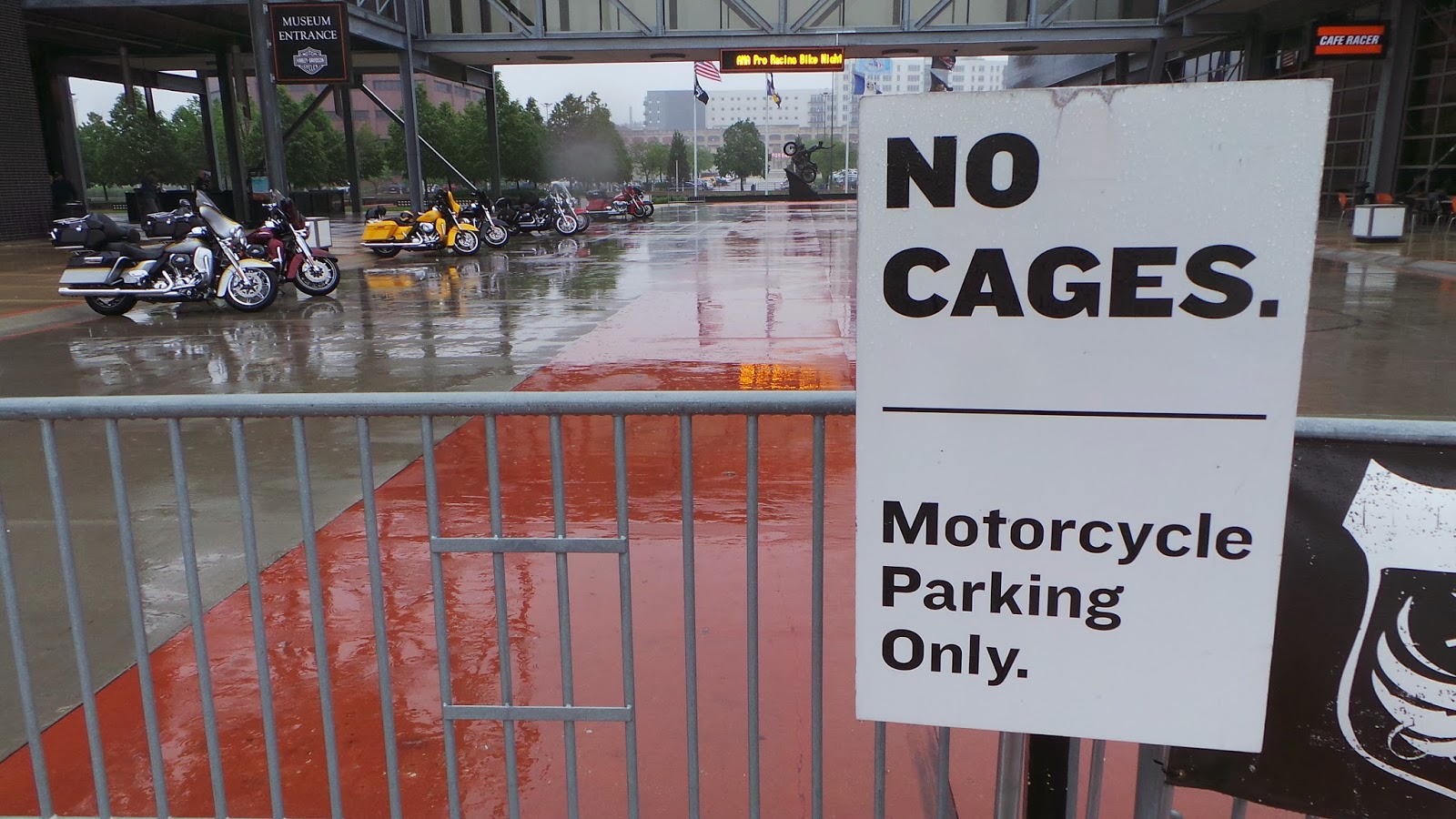 Free exclusive parking for our 'Hogs' - for those that don't know "Cages" are what motorcyclists call cars! 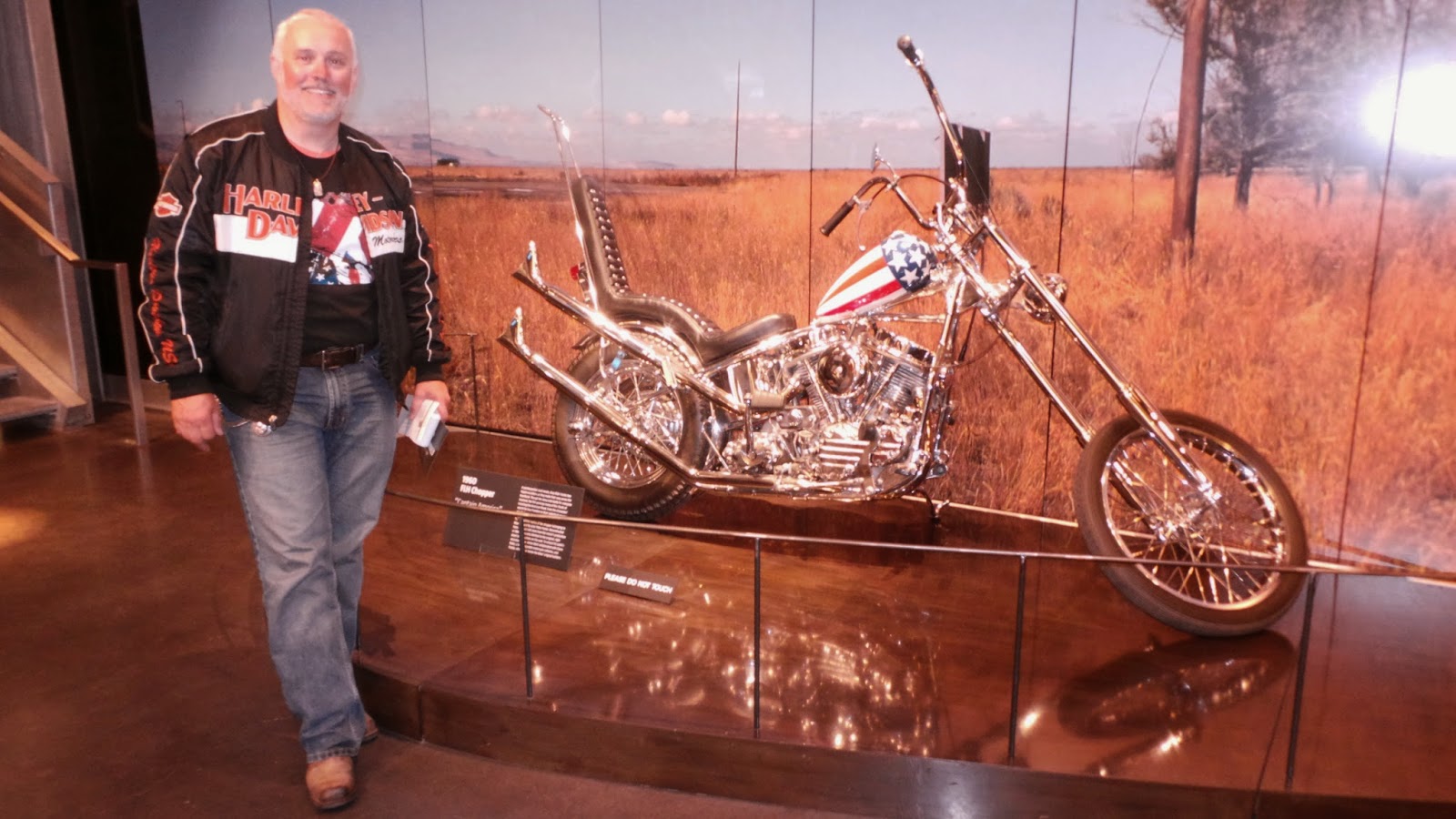 This bike 'Captain America' from the movie 'Easy Rider' was the inspiration during my childhood that one day I would ride across America on a Harley.  Some dreams can come true. 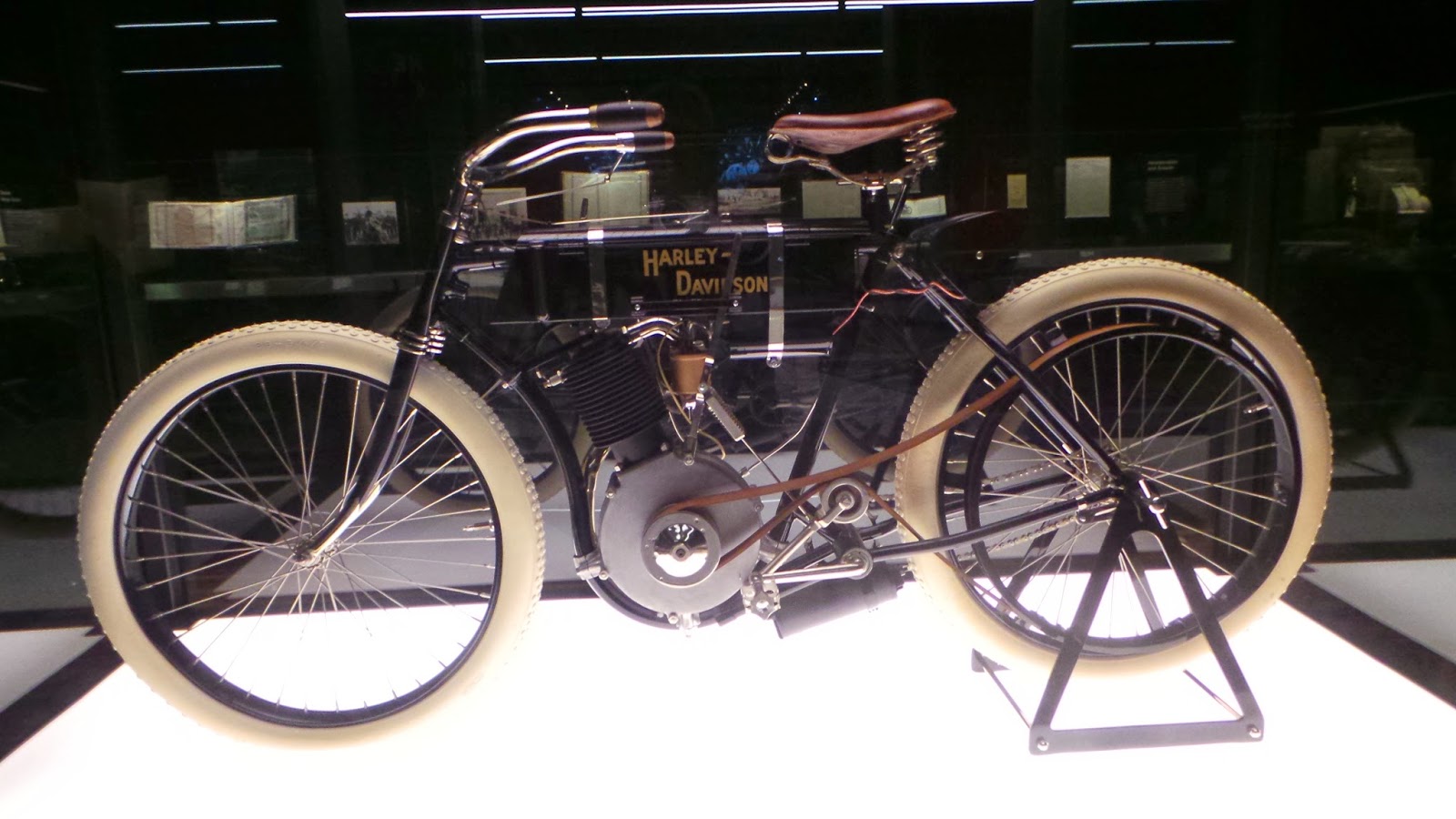 This bike must be worth millions of dollars.  It is Serial Number 1, the first production motorcycle ever made by William Harley & Arthur Davidson in 1903.  It is a monumental achievement for the Harley Davidson Motor Company to have been in continuous motorcycle production for 111 years now.  From two very passionate customers 'The Blighty-Boys' we shall always remain grateful for that - thank you all! 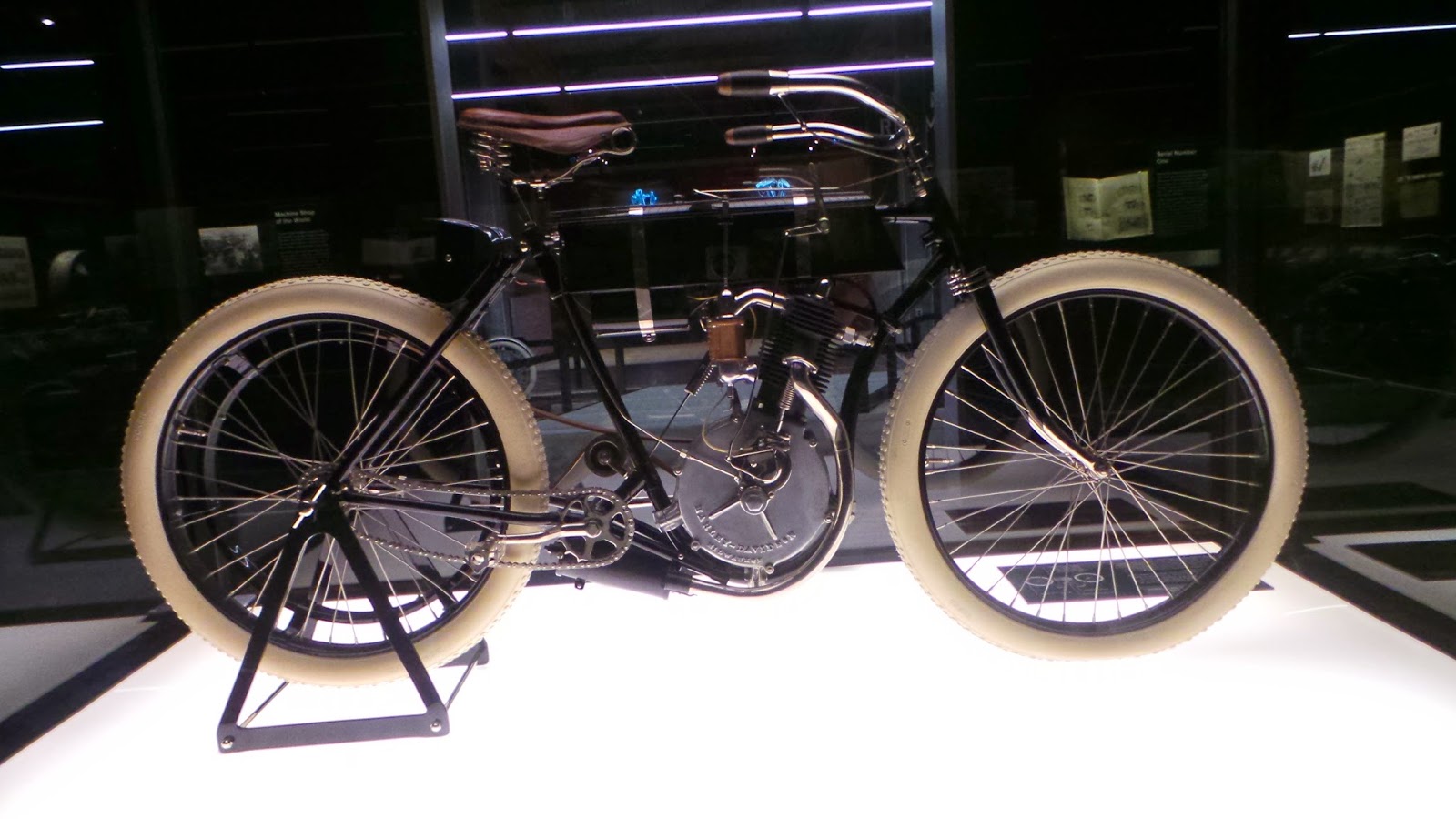 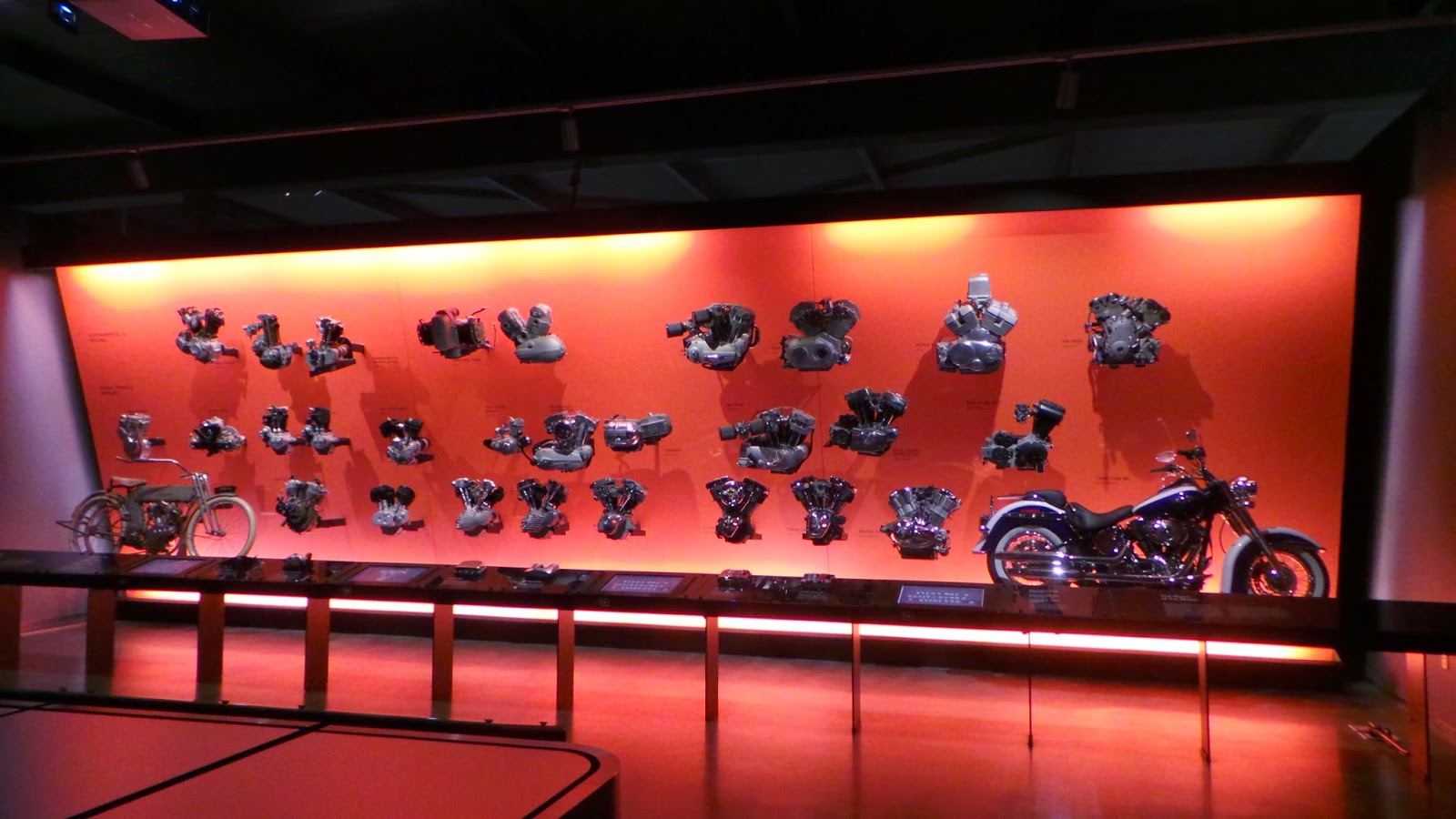 This exhibit showed the evolution of the Harley Davidson engines.  From the control panel you could select any engine and it would play the sound of it running on the most amazing high-fidelity audio system.  It felt like the bike was riding into the room. 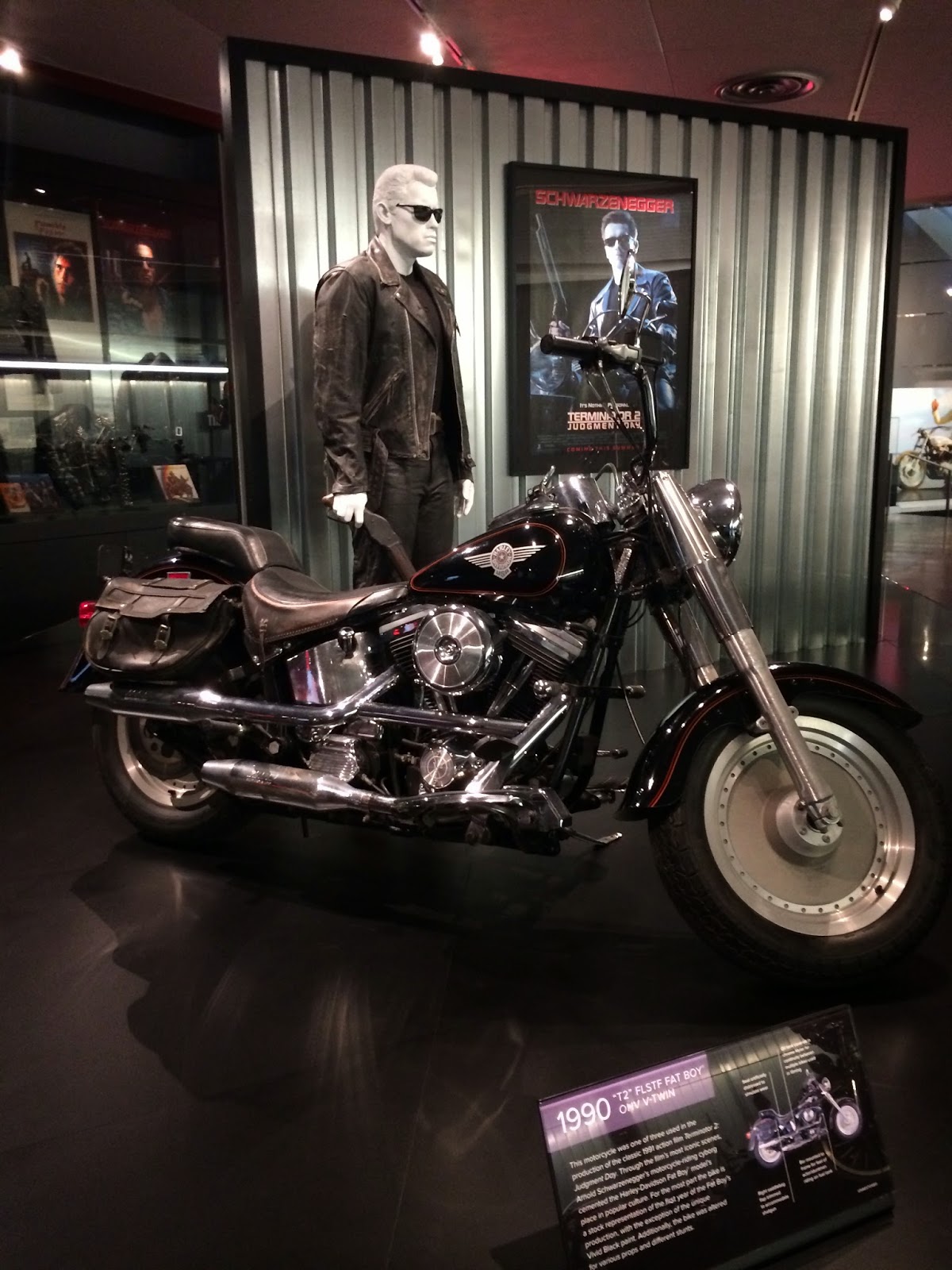 "I want your clothes, your boots and your motorcycle…..I'll be back!" Which was a 1990 Softail 'Fat-Boy' nice choice Arnie 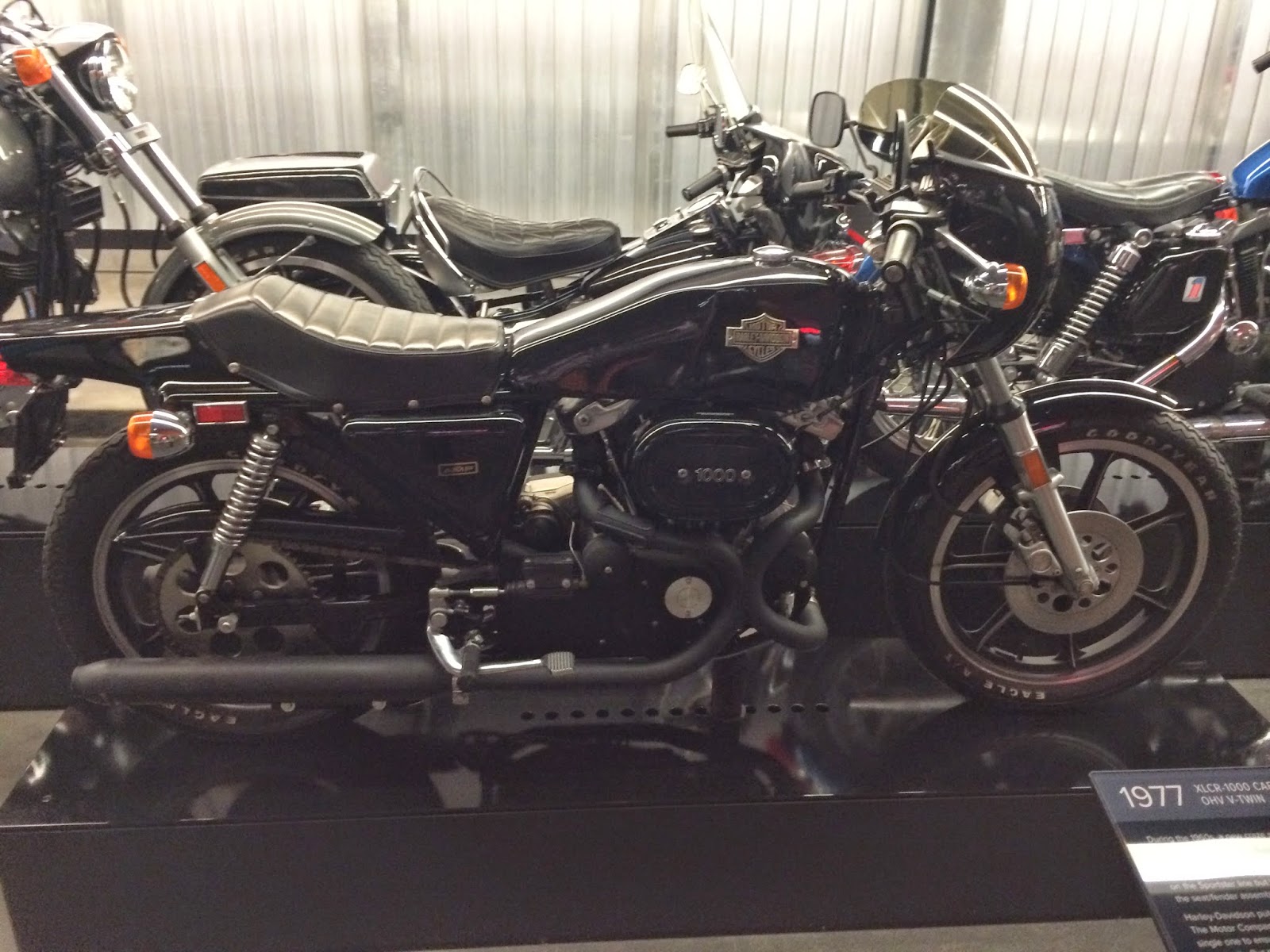 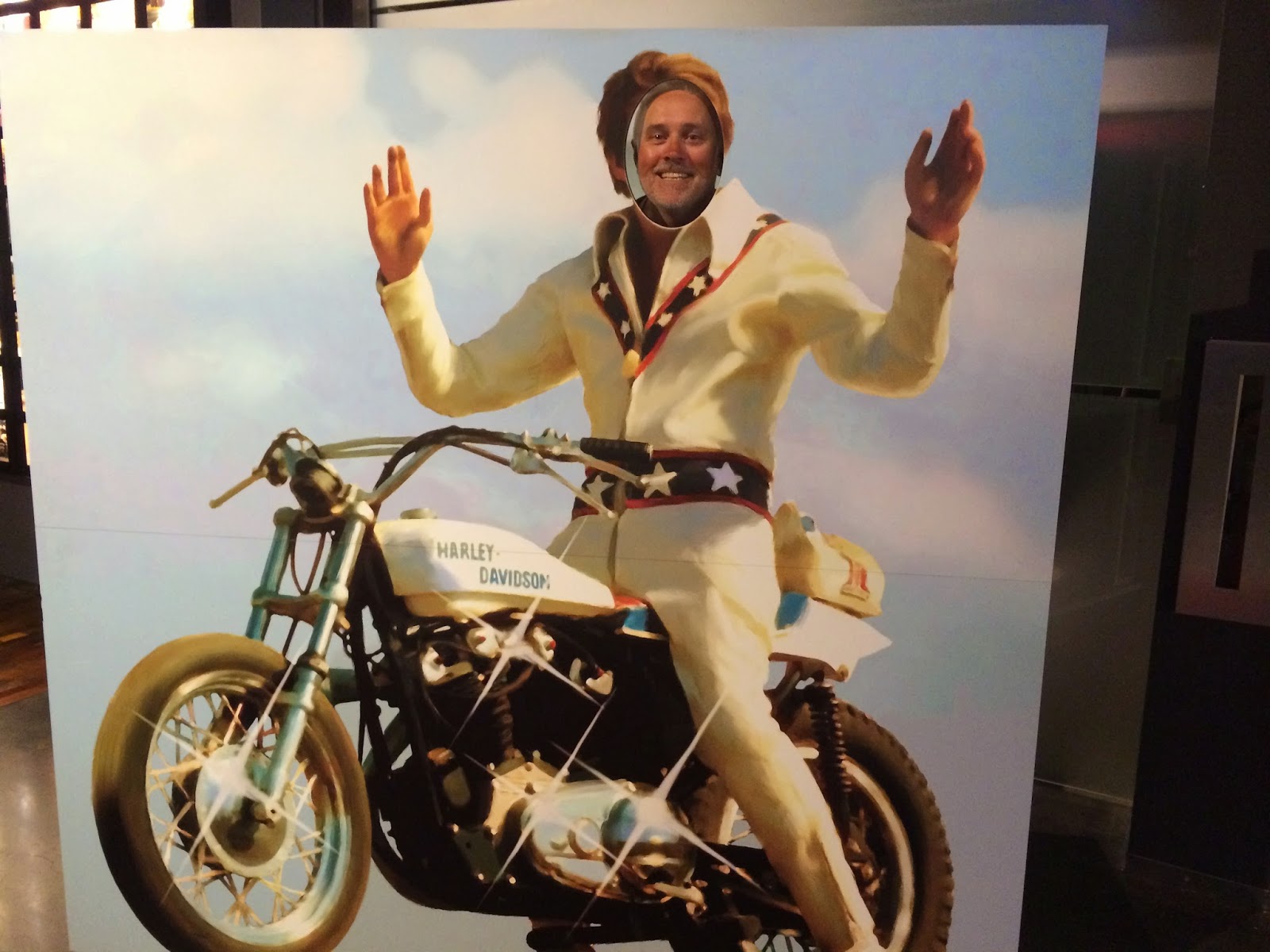 I would have made a good 'Evil Kenevil' 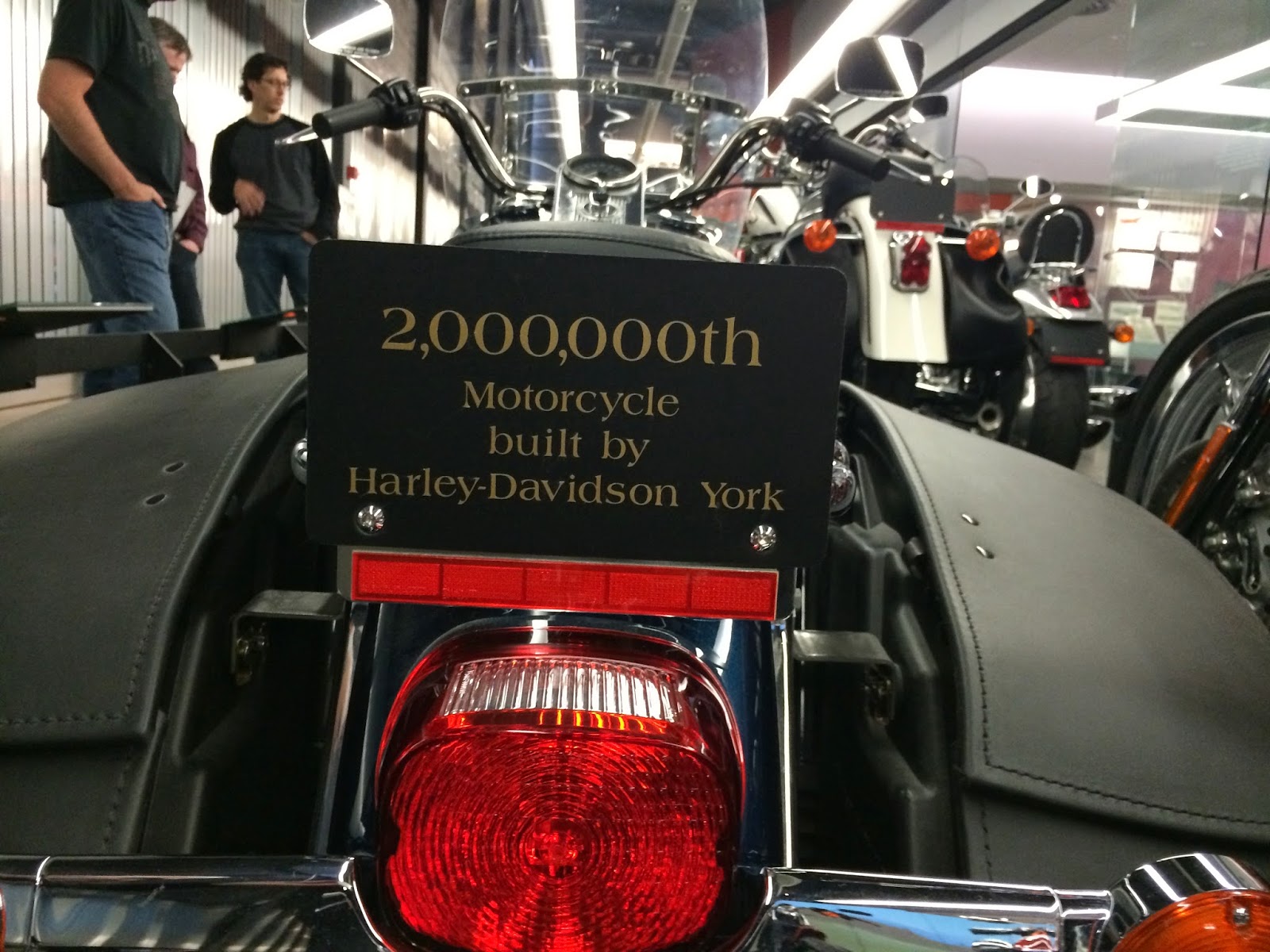 Trivia time folks.  What was the model of the 2,000,000 bike produced by Harley Davidson?  Here is the actual bike 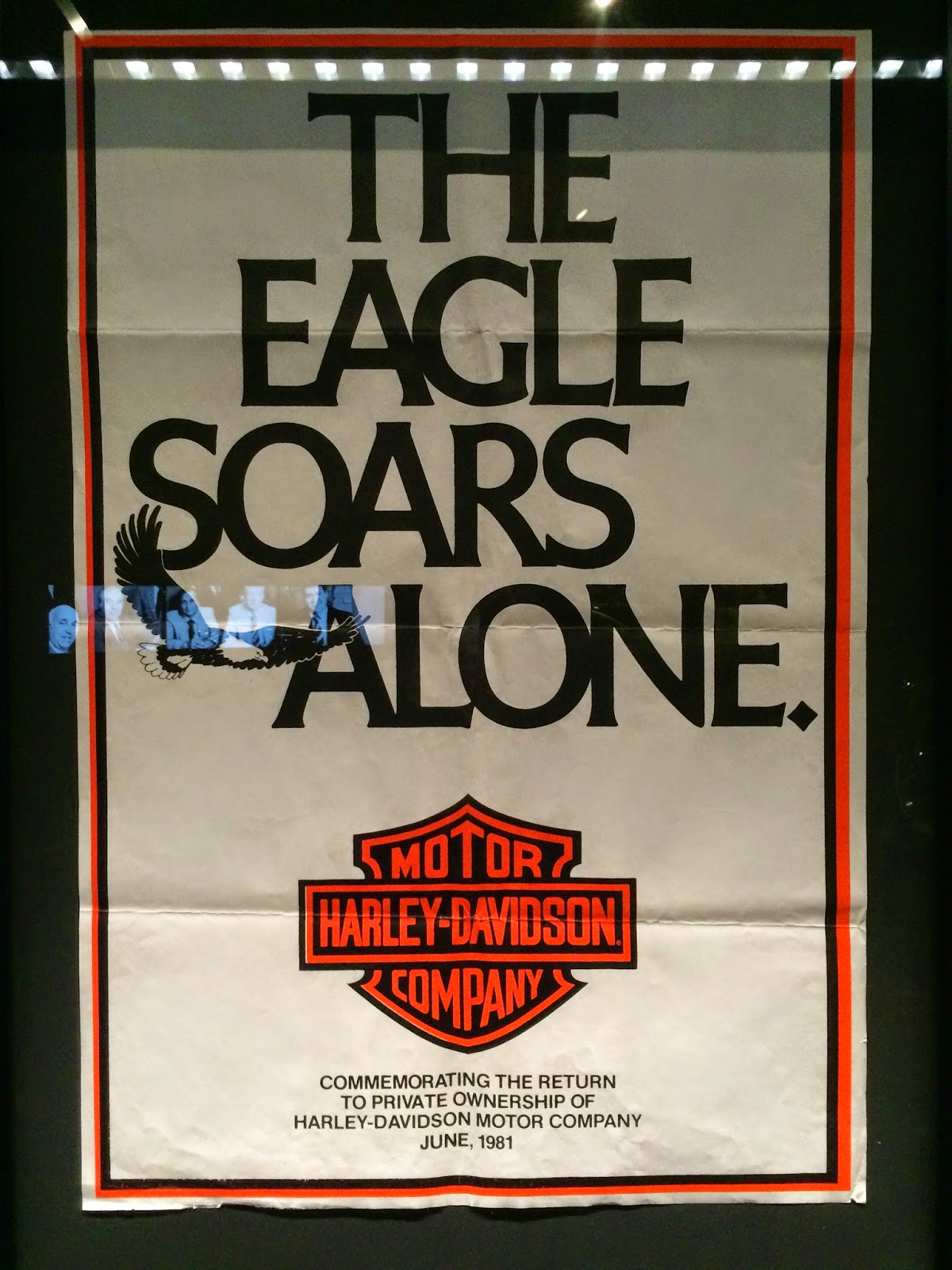 This is where the 'party' nearly came to an end in June1981.  Harley Davidson was about to go bust, but key executives in the business pulled off a management buy-out from AMF and took the company back into private ownership, and as they say "the rest is history" 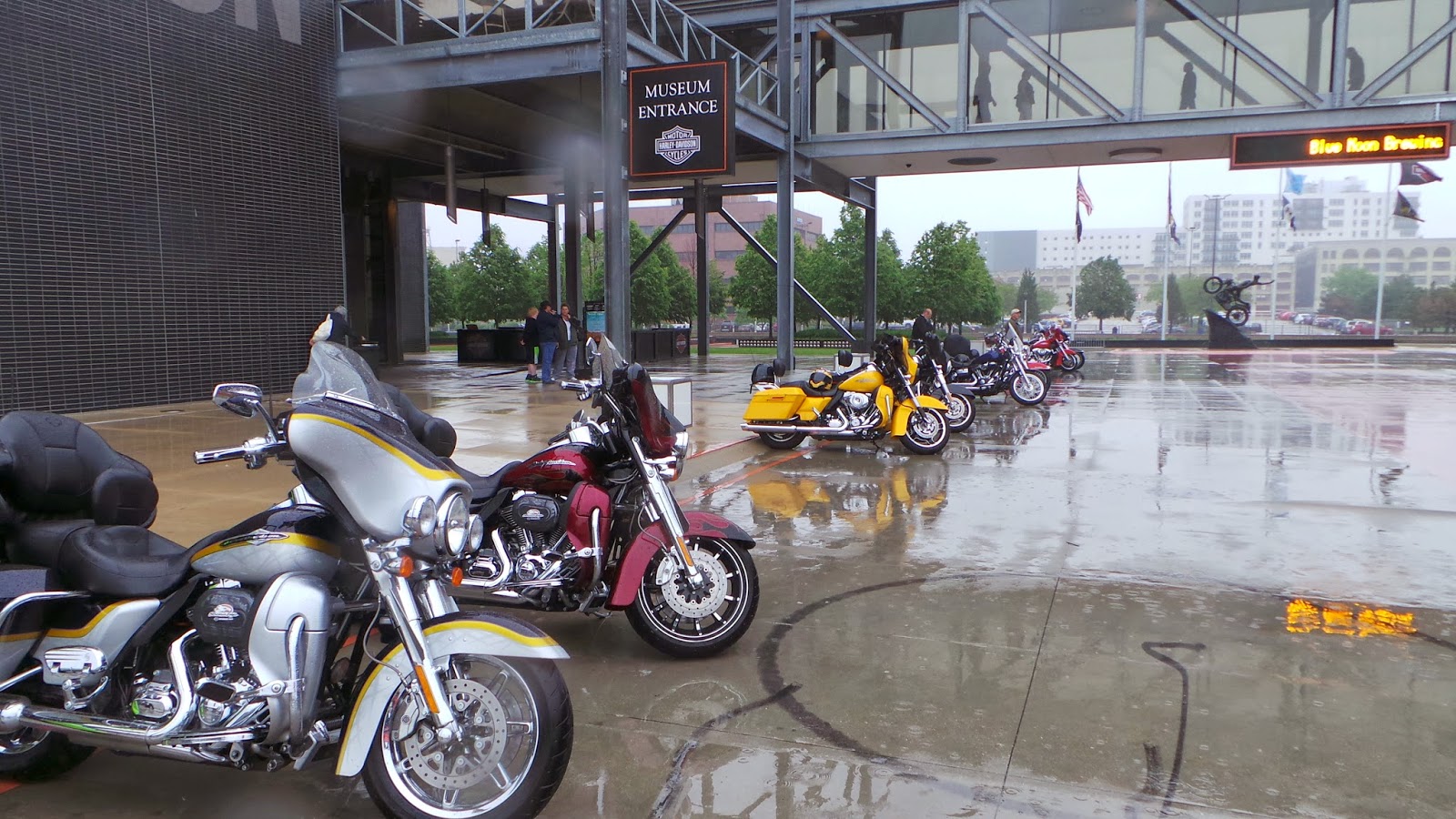 Time to head back to the hotel after a bowl of hot chilli in the cafe, but look, it was still raining 4 hours later.