Monday 30th June - 'The Beach Party Goes On, Down on The Jersey Shore'

We awoke to two things on Monday morning - another beautiful New Jersey day of sunshine, clear blue skies and 'thick heads' - it must have been that last beer we had!   It was another start to a week so we needed to get our laundry done, but feeling like we were on vacation we decided to splash out and pay for a "wash & fold" service whilst we continued to enjoy ourselves by the shoreline.

Michael offered to show us around the area, much of which he grew up in. Once again we jumped into the slow-to-accelerate but ever so trusty and well driven 4-Cylinder SUV! And headed for Asbury Park which included a stunning cruise up the New Jersey coastline following 'Ocean Avenue' which is the road that runs right alongside the beach for miles and miles. 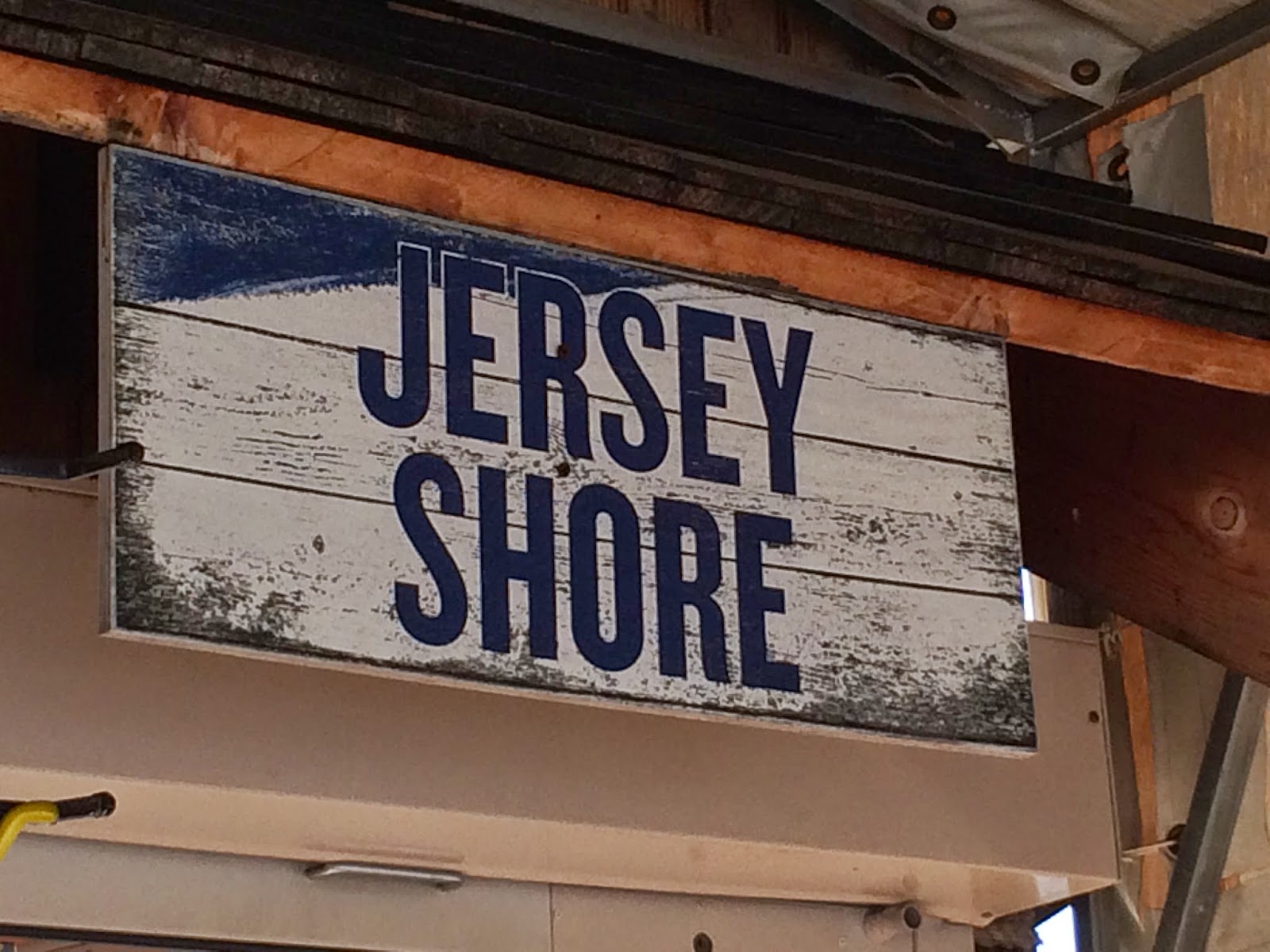 We had lunch, or was it 'brunch' at a restaurant along the board-walk and after much debate a "hair of the dog" beer, after which Michael and I felt much better! JG abstained, preferring the water to accompany his headache! 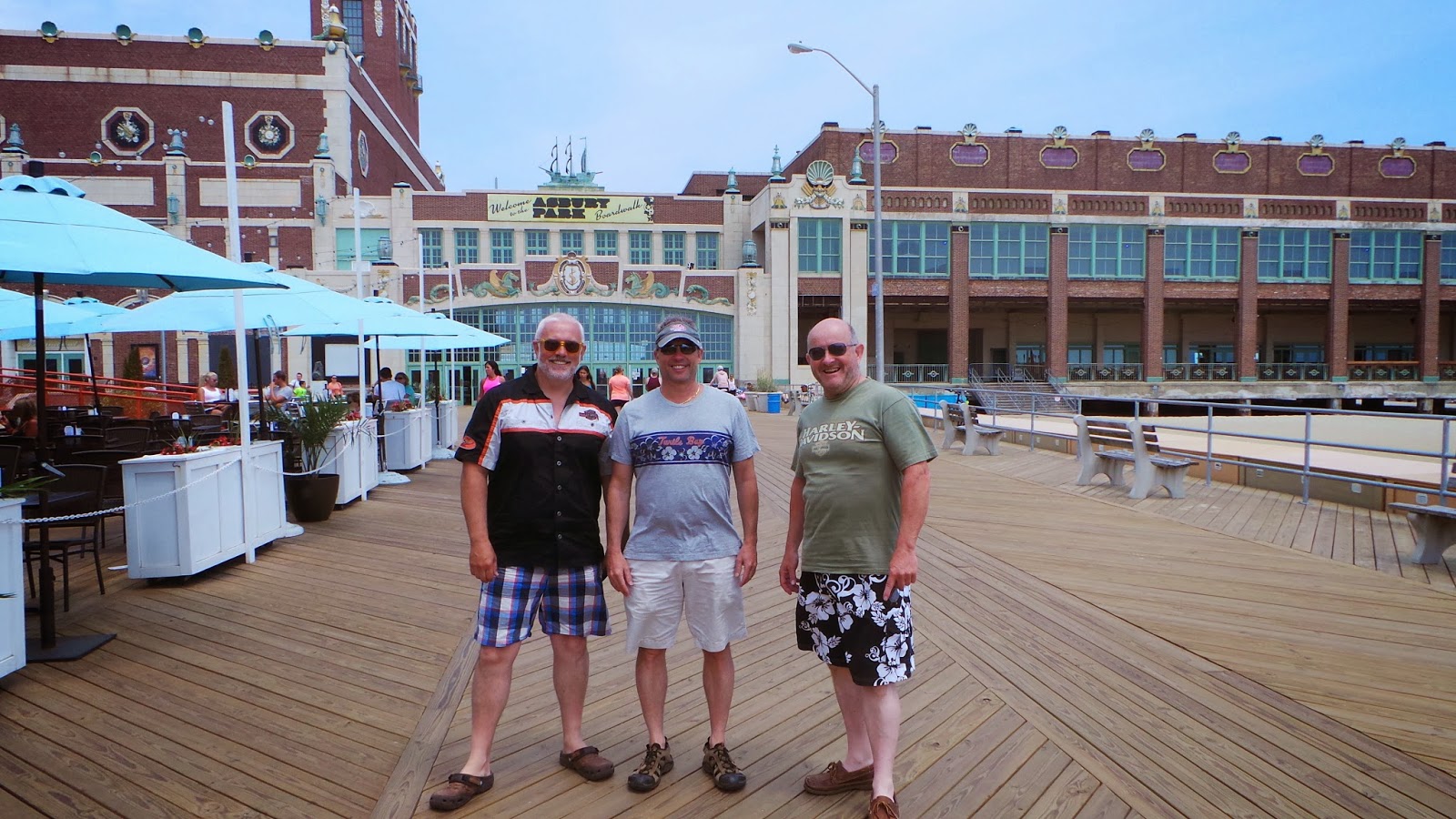 Here we are after lunch - that's Michael in the middle flanked by those darn "Blighty-Boys."  In the background is the 'Asbury Park Boardwalk Convention Hall' a very famous concert venue for anyone "who's anyone in music" has played there. Like for instance, Black Sabbath, Led Zeppelin, The Beach Boys, The Rolling Stones, Pink Floyd, The Doors, KISS, Judas Priest, Iron Maiden, Bob Dylan, The Who, Van Halen, The Allman Brothers Band, The Clash and of course local boy Bruce Springsteen.....and many, many others. 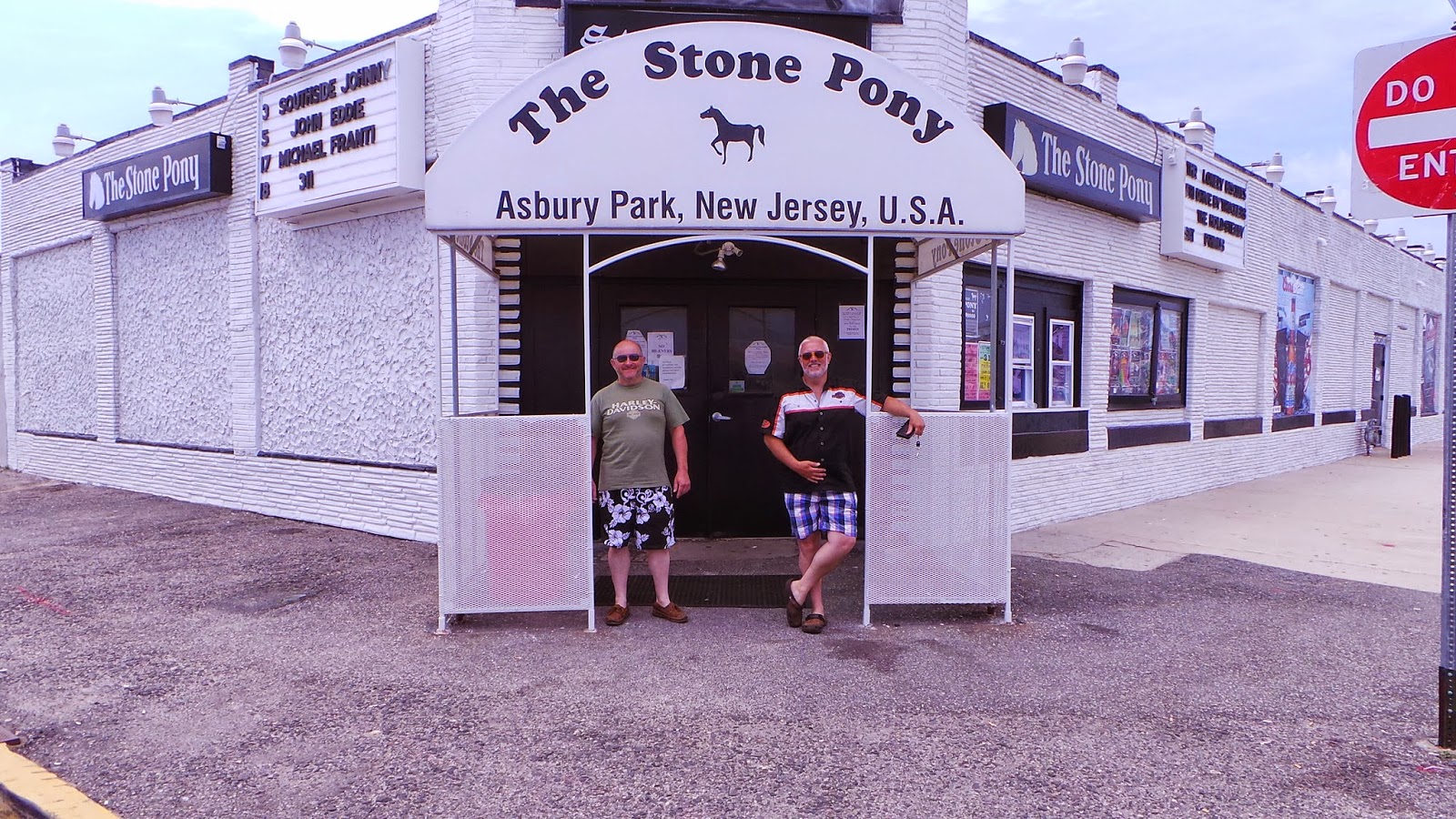 The 'Stone Pony' (http://www.stoneponyonline.com/info/history.html) also in Asbury Park, just a short stroll down the Boardwalk is another distinguished live music venue and a career starting place for many young artists  at the time like 'Jon Bon Jovi' 'Bruce Springsteen' 'Blondie' 'Stevie Ray Vaughn' to name a few.  But for 'One Night Only' they could have booked The Blighty-Boys, but no one was home when we called!

As the sun was going down it was time to collect our laundry and head to another notable Sea Girt establishment - the 'Parker House' (http://www.parkerhousenj.com) which had been a house of fine food, wine, cocktails and beer for over 137 years situated just off the beach.  The atmosphere was great because another World-Cup football match was being played on the large flat screens.  The bar was packed, standing room only, as we enjoyed several well made margarita's and cheered on the Germany vs. Algeria game. 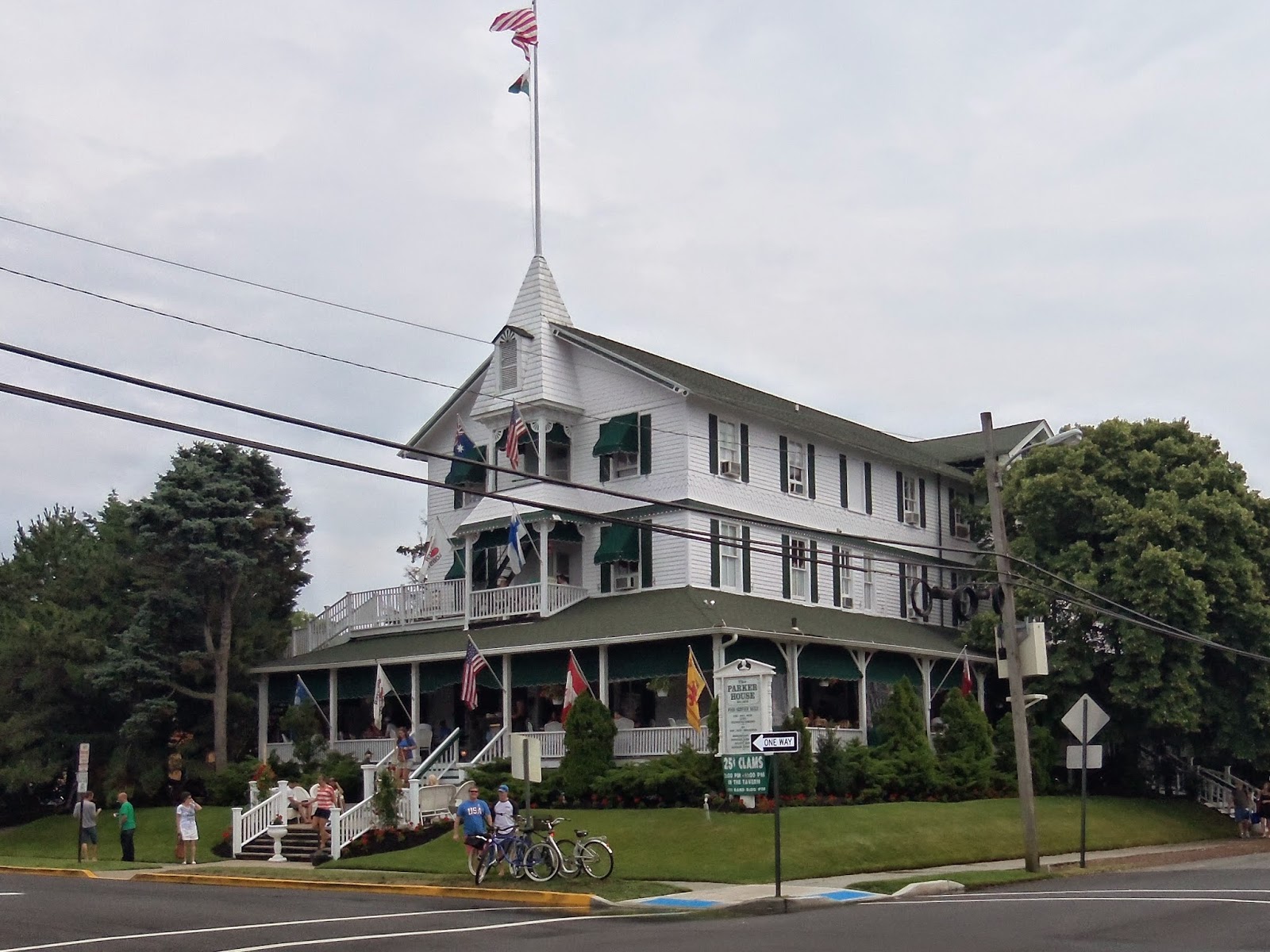 After all the excitement of the 'Parker House' it was time to go eat.  Michael drove us over to Klein's Waterside Cafe (http://www.kleinsfish.com) for some very fresh local seafood. 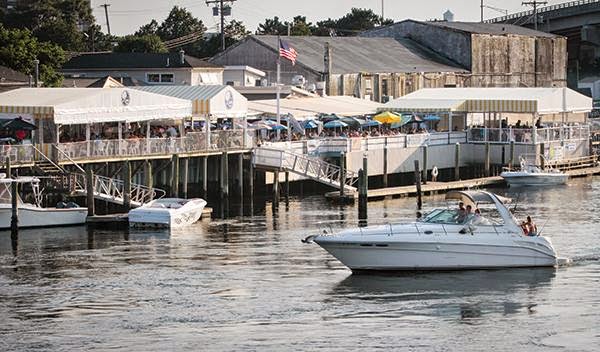 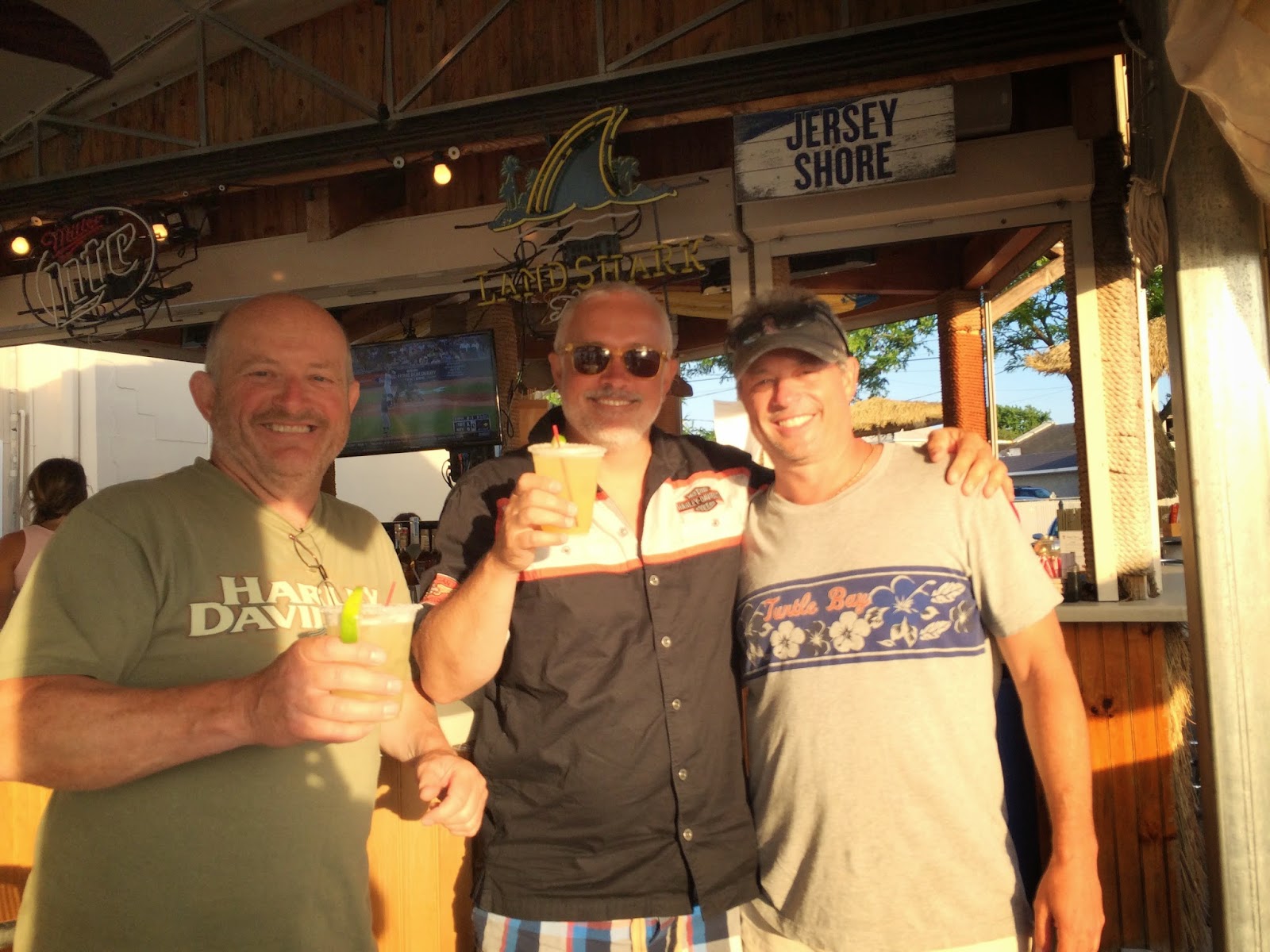 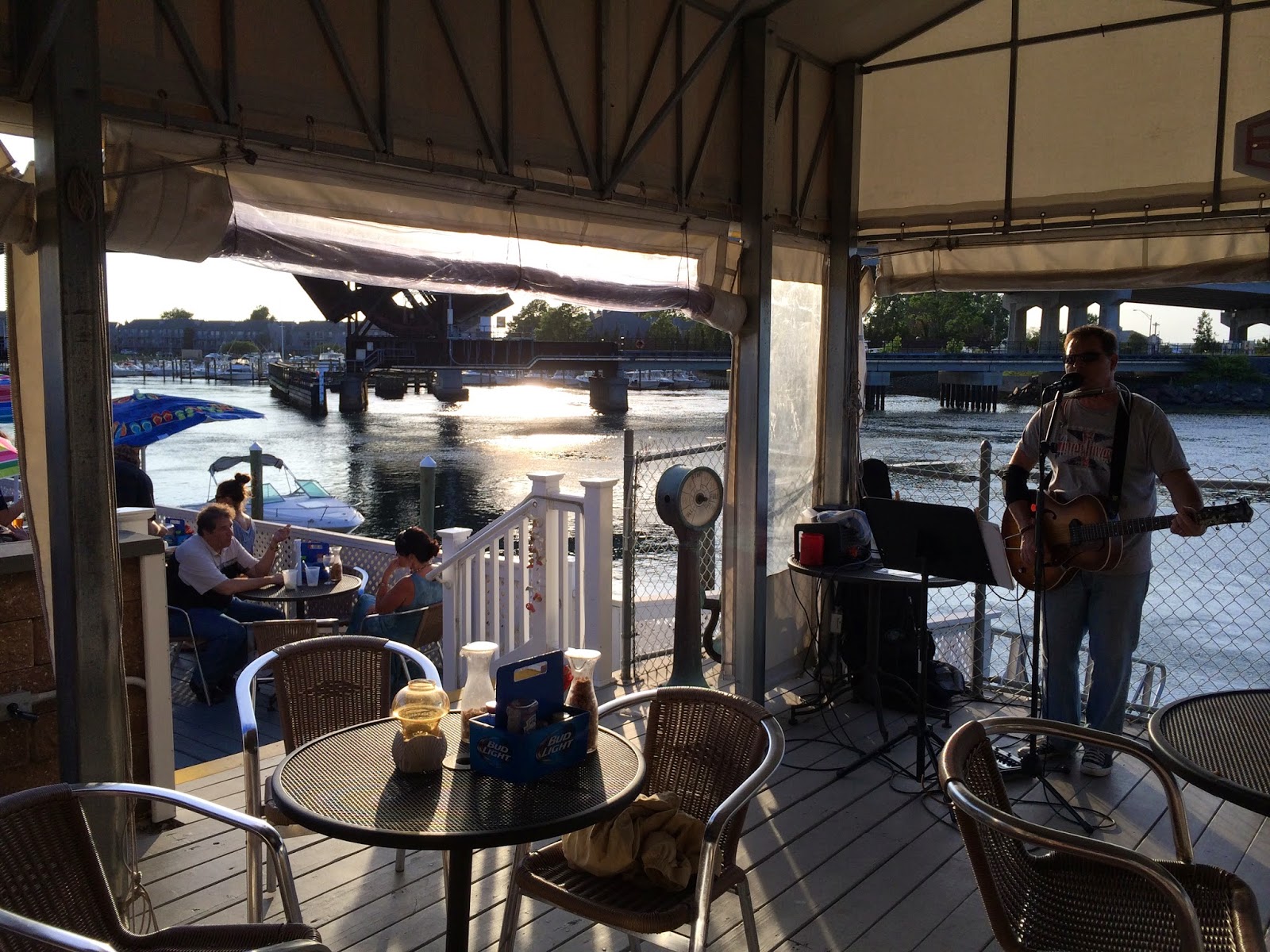 Not sure who the singer/guitar player was but he was doing some great Springsteen covers.

After dinner we headed to another bar to meet up with Michael's college friend Paul.  It was late as we ordered our drinks and the bar was soon to close but being America "take out" for our Rum was an option, although I think could have been technically illegal......but hey at that point we didn't care! 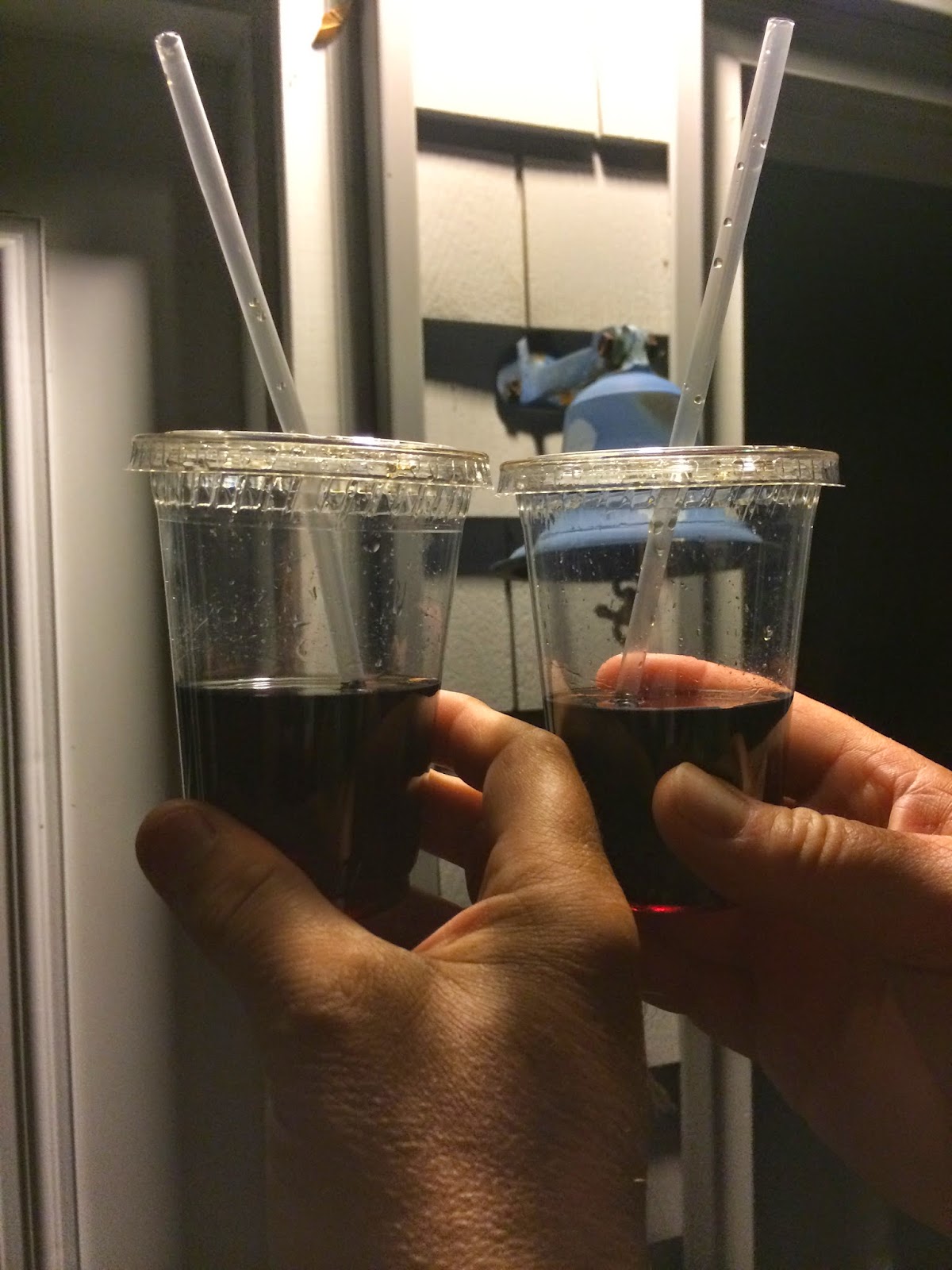 What a great day we had, and an ever better evening thanks to the friendship and generosity of Michael & Paul - thanks guys!  Top blokes you are.

After being on the road for 3 months, riding our motorcycles in all weathers, but let's face it, mostly beautiful sunshine, a man needs a vacation!

Time for us "Blighty-Boys" to head for the beach thanks to my dear friend Michael, and his college buddy Paul.  Paul has a holiday home in the town of Sea Girt, right next to the Jersey shoreline and had very generously invited us all to come and stay.

After early morning coffee with Michael by the Hudson River next to his Manhattan apartment we set off to park our motorcycles in a secure city car park for the sum of $100 each for just two days "welcome to NYC" I hear you say! Before jumping into Mikes car and heading for Sea Girt, New Jersey 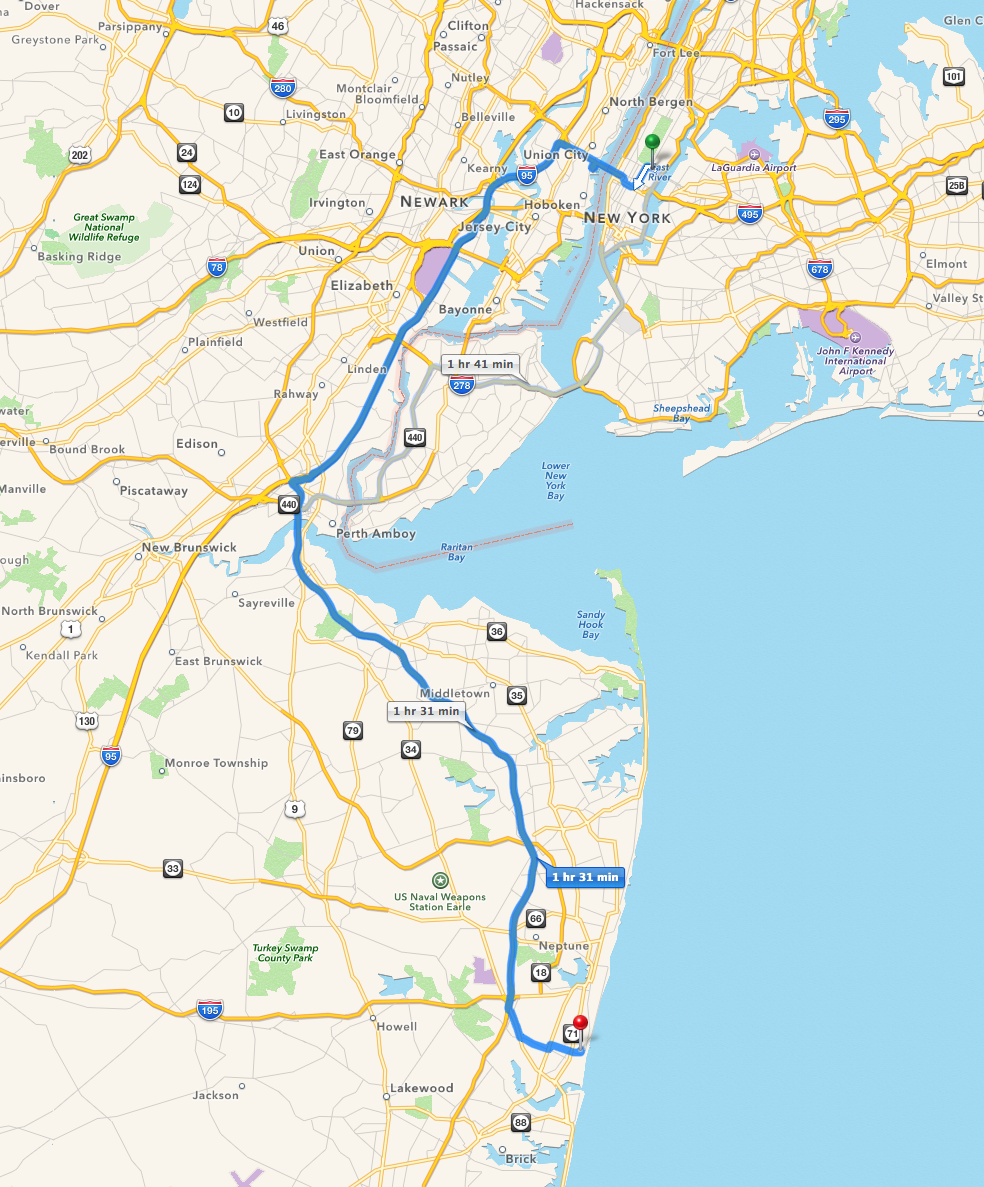 The drive down from Manhattan took about an hour and a half.  It felt really strange being in a car and mixing it up with all the morning traffic as we battled our way out of the city in Michaels 4-cylinder SUV with the regular cry from him of "I gotta f***ing merge, I need 6 cylinders to merge, 4 'aint cutting it! I should never have bought this f***king car!!!

Pulling into Sea Girt we stopped for supplies - cases of beer, and a magnum of vodka for the cranberry and soda vodka cocktails we would take to the beach in plain plastic bottles, so it looked just like fruit juice!  Apparently you can't drink alcohol on the beach in Sea Girt.  For a minute there JG and I thought we were back in California. 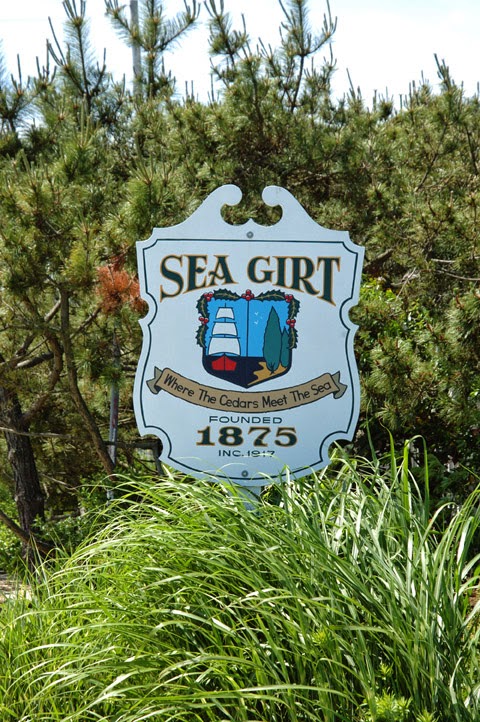 But before the beach we needed lunch and Michael knew just the place to go - 'Rods Tavern' - what a wonderful place and to top it all, it served ice cold 'Stella Artois' beer! 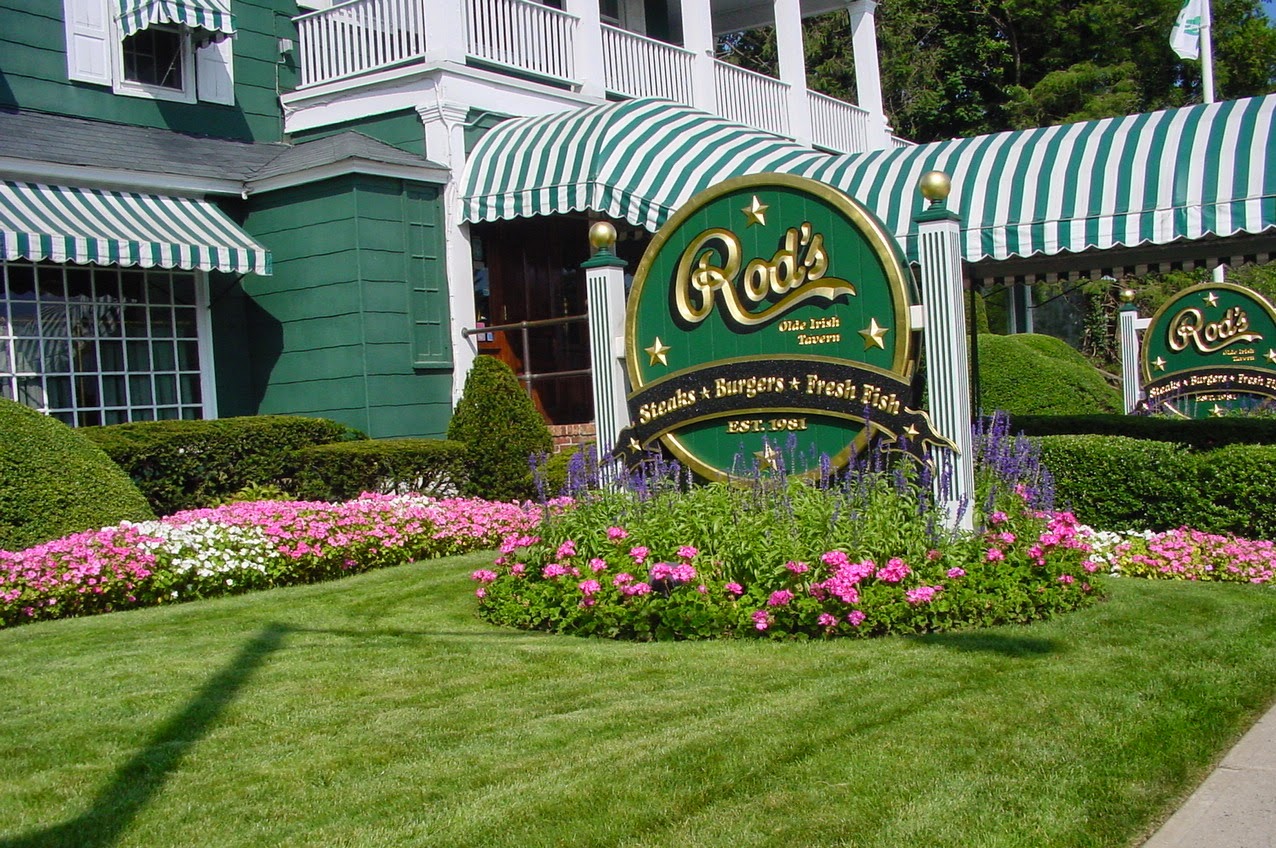 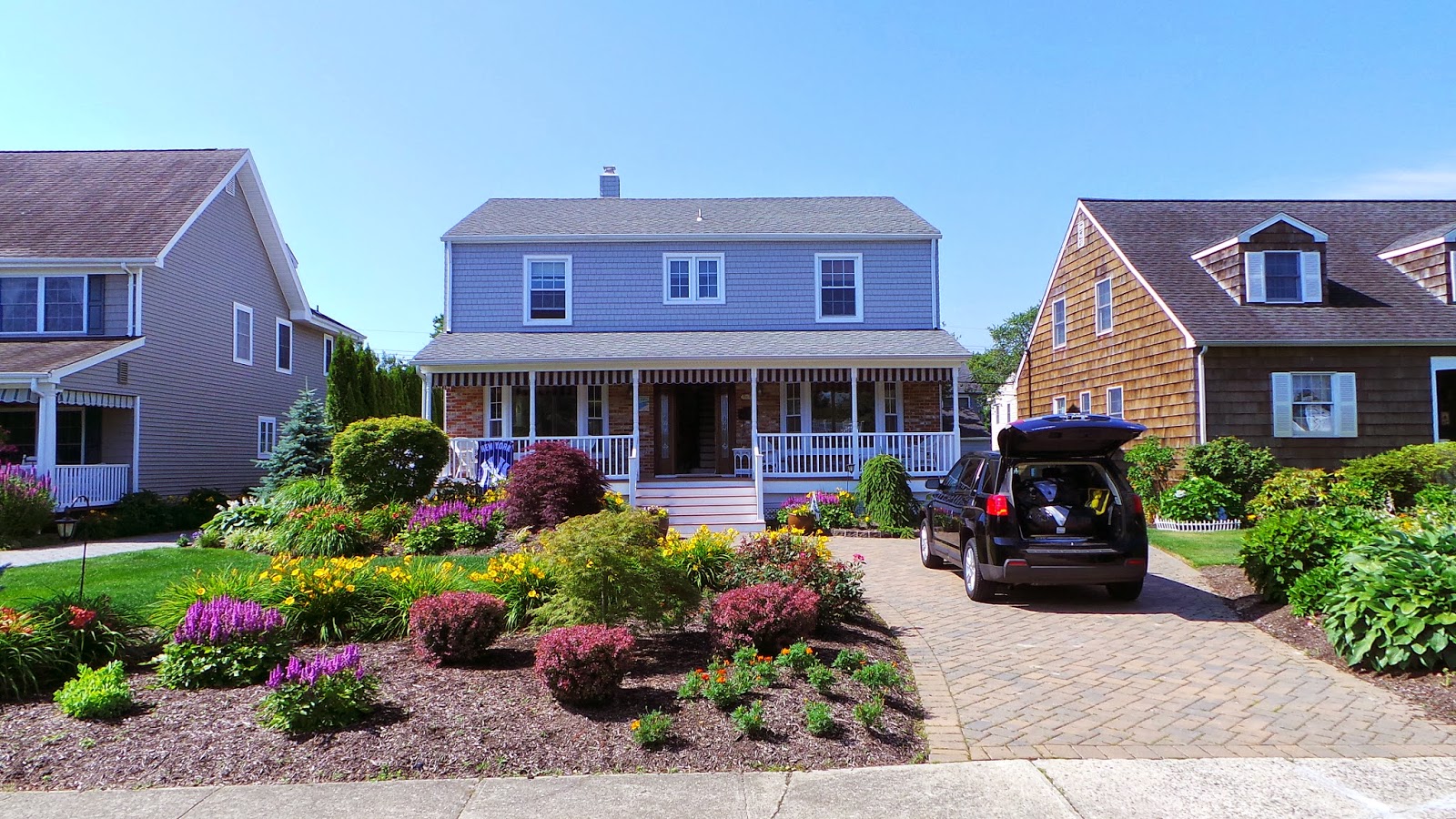 Paul's holiday home. Just a 2 minute stroll to the beach.  What a wonderful welcoming place.  Note the 4-Cylinder SUV recovering in the sun after the 'thrashing' Michael gave it on the drive down! 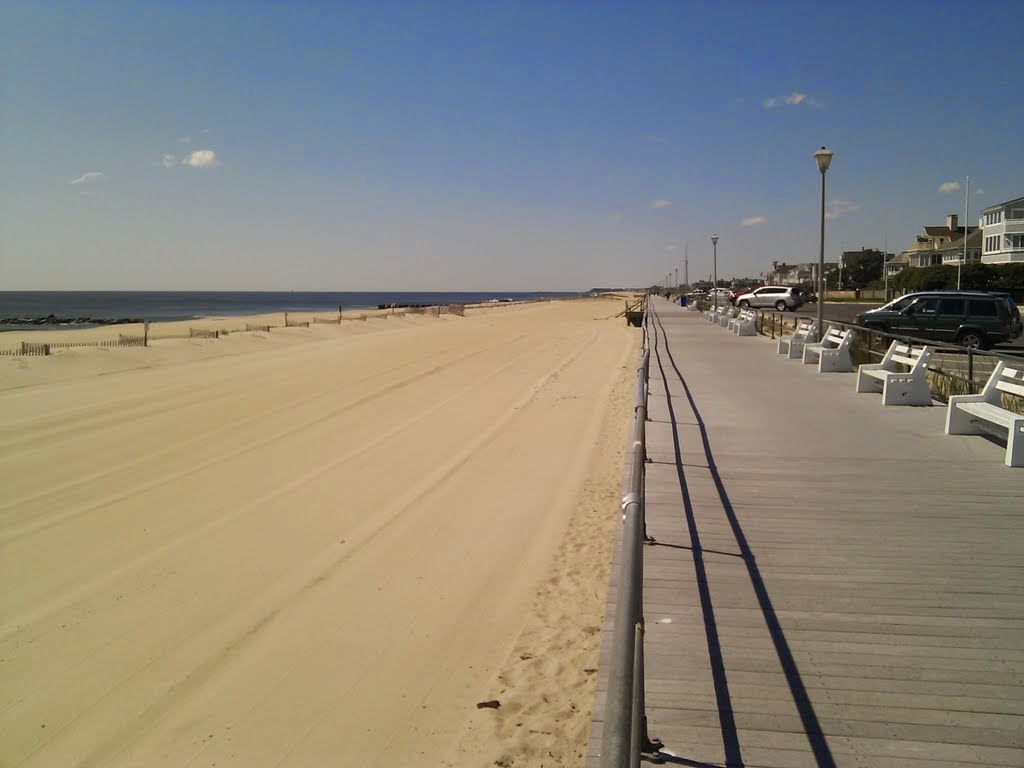 'Sea Girt' beach just calling you to it.  I couldn't quite believe that within hours of arriving we all found ourselves swimming in the sea - I mean that's the Atlantic Ocean!  Surprisingly it was warm and the waves were great fun to be jumping and splashing around in.

That night we enjoyed endless beers and great conversation at Paul's house along with his girlfriend Rachel who both prepared and cooked for us a "banquet" of a BBQ, such kind people.

You may have been wondering why the 'radio silence?'

Hello 'Friends' - well it's been way too long since I last posted on our Blog.

Sadly I have had good reason.

Just two days prior returning home to England after our epic, and literally 'life changing' tour of America I received a call from my brother whilst in my hotel room in New York City to say that our Father had passed away suddenly and unexpectedly on the 5th July - he was 78 years old.  He had died peacefully at home in his favourite armchair with a glass of red wine in his hands watching a World-Cup soccer match.  He loved football more than any other sport.   What a way to go eh!

My Dad was a daily devoted reader of our Blog and never missed a post and by all accounts it bought him great pleasure to see his youngest child realising a life's dream.  His last comment via my FaceBook  page was on the 2nd of July, it simply read "You've done it son, well done to everybody."   It has been a great comfort to me to know that he watched and read in detail the three months of our adventure across possibly the most beautiful country on the planet; A country he never got round to visiting even though he travelled extensively throughout Europe.  My Dad was many things, but above all he was a man of service to his community, including becoming the Mayor of his home town during his 56 years in public service roles.  What an example he set, and a challenge he leaves his four children.

Like my 13,000 mile ride across America he will never be forgotten. 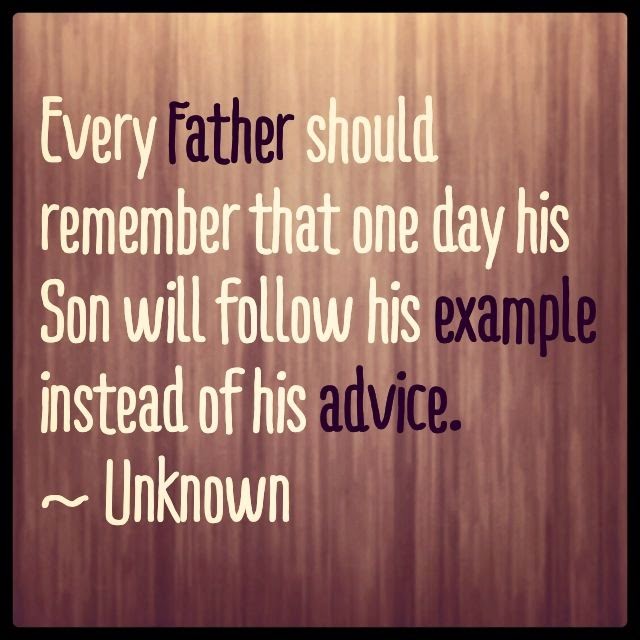 Now the time is right to finish off our Blog.  Standby for the final few postings!