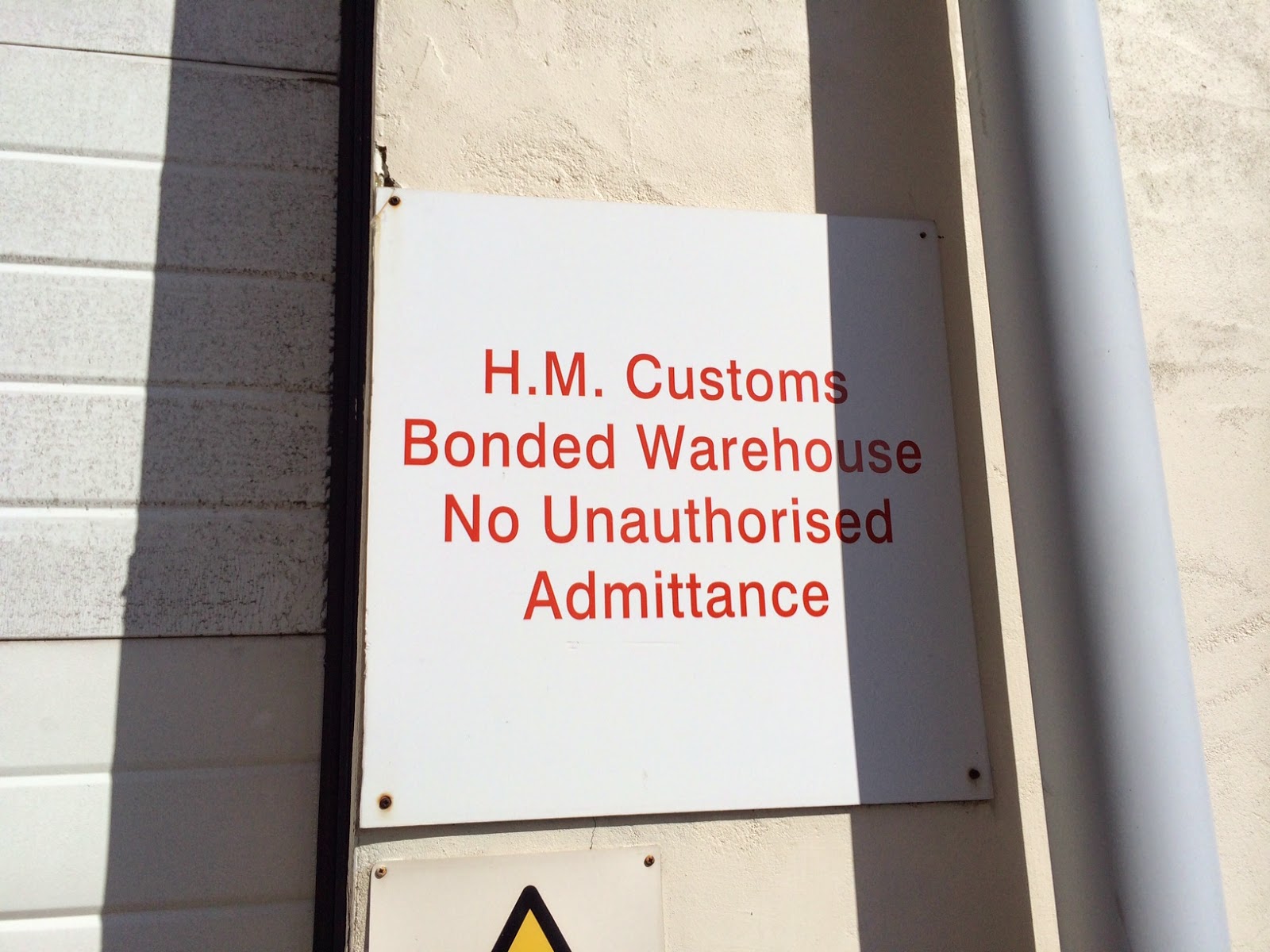 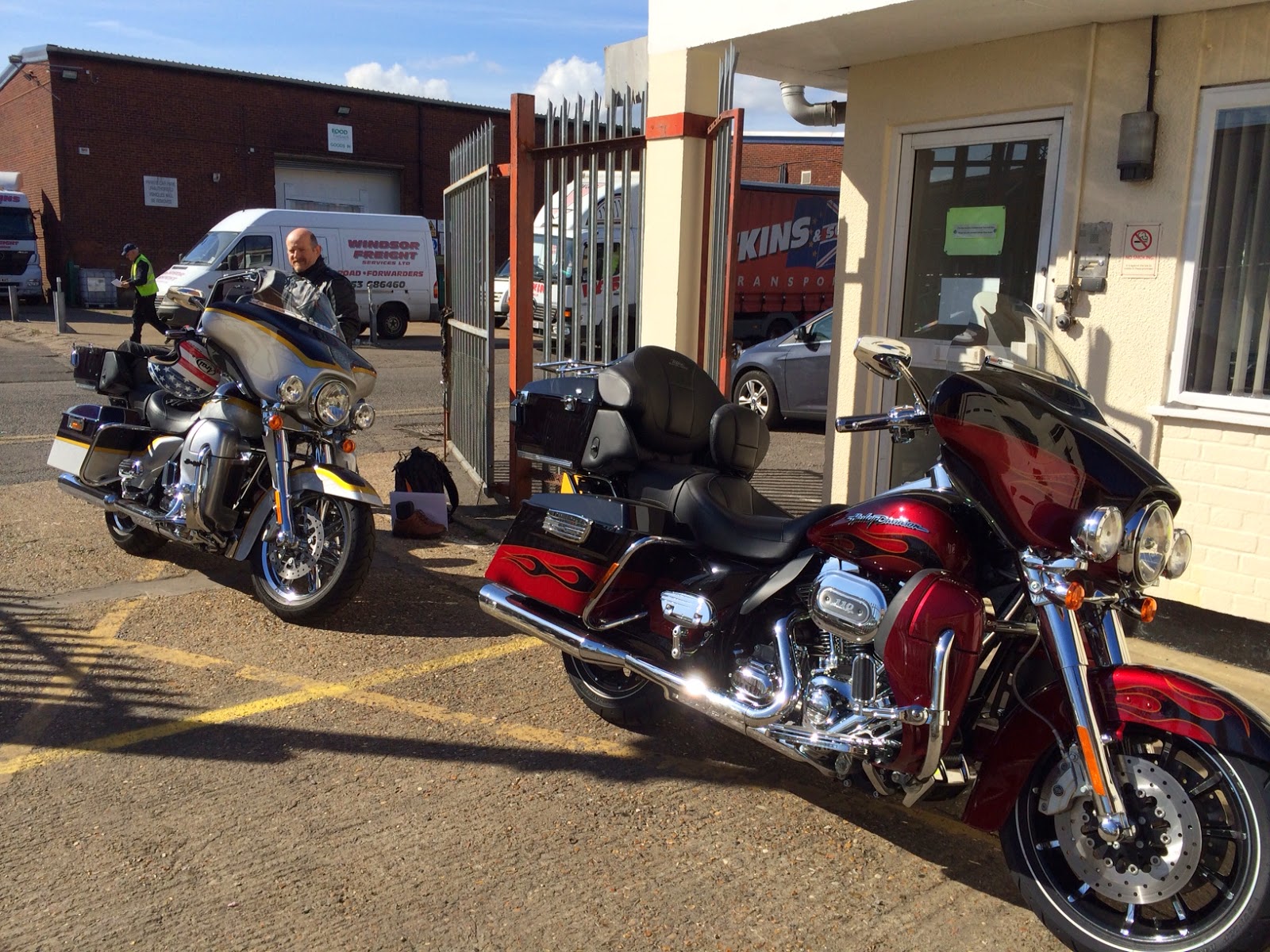 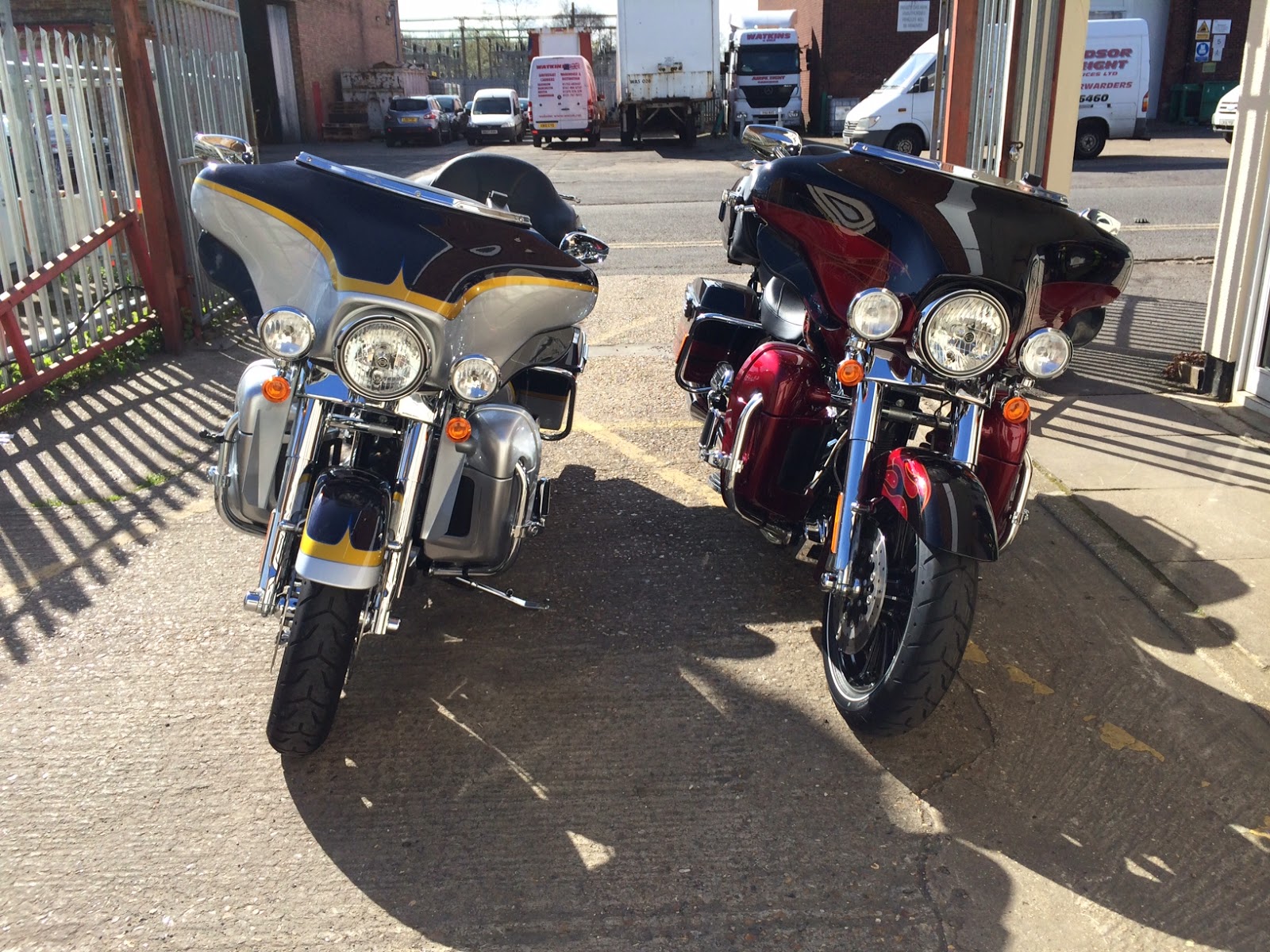 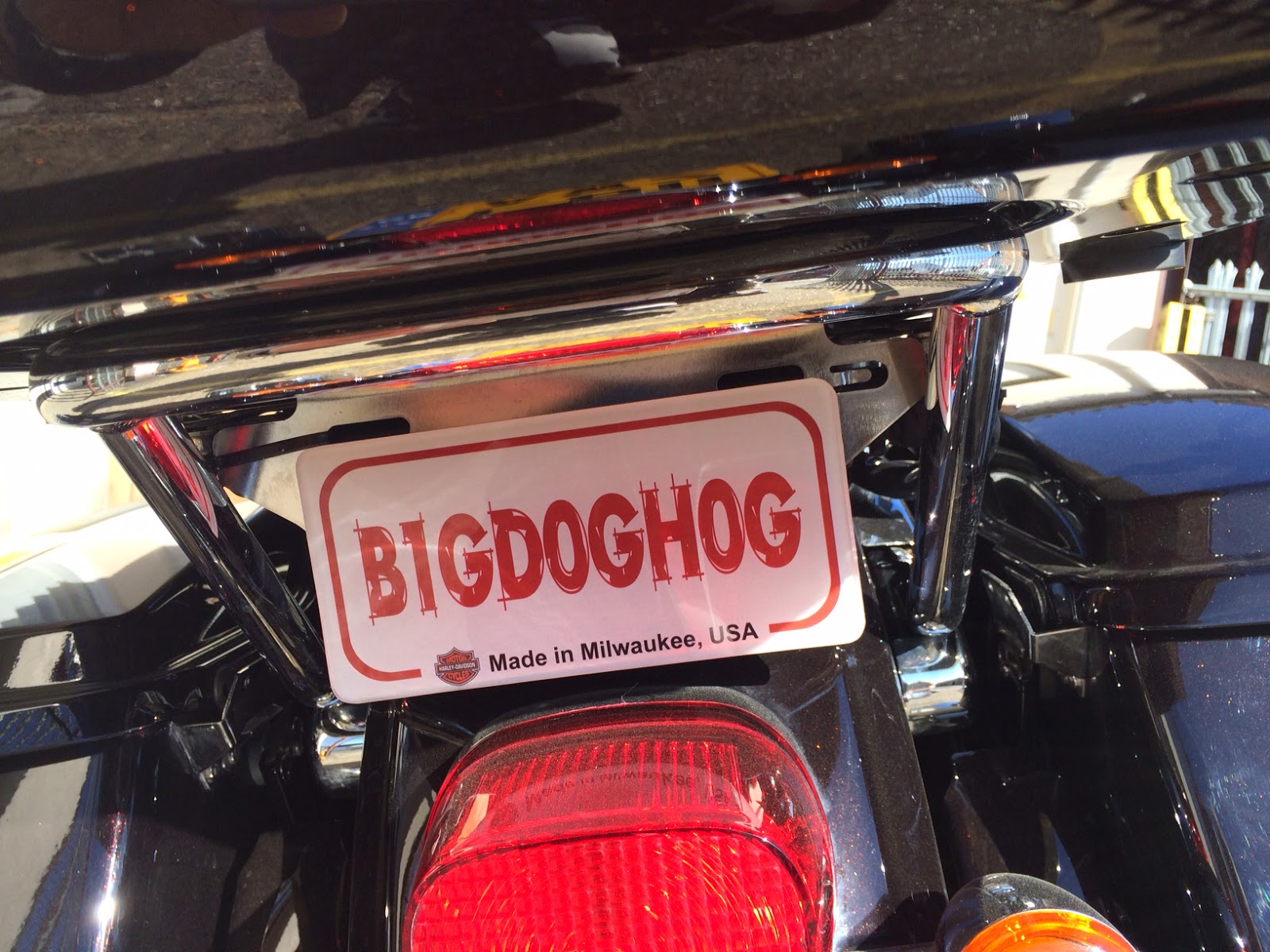 The 'final countdown' began today with the dropping off of "B1GD0GHOG" and "LULU" at James Cargo, our bike shippers, based near London's Heathrow Airport.  Talk about making it feel real!  The next time we see these beauties will be in Orlando in a couple of weeks time.  The screens and aerials had to come off.  We left with them being secured into a bonded warehouse in preparation for them being packed into custom built crates ready for the flight to sunny Florida.

During our USA Tour we plan to use two 'GoPro Hero 3+' camera's one on each bike to capture riding footage of some of the spectacular roads and wonderful sights we are bound to enjoy.  But first we need to learn how to use them!  Here is a short test film. This one should work both on an iPad and LapTop/Desk Top.
Posted by Jaydee at 13:58 7 comments: 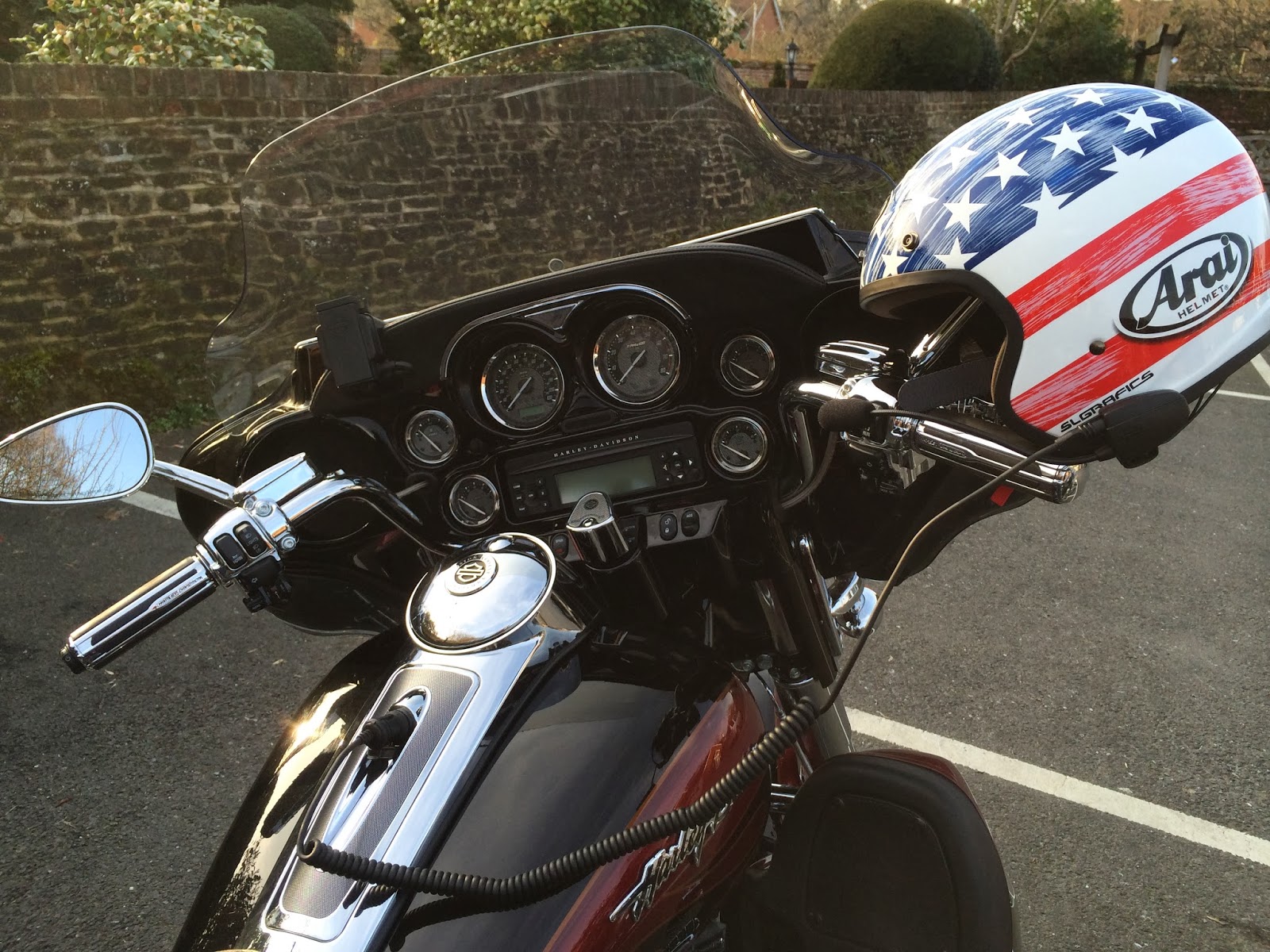 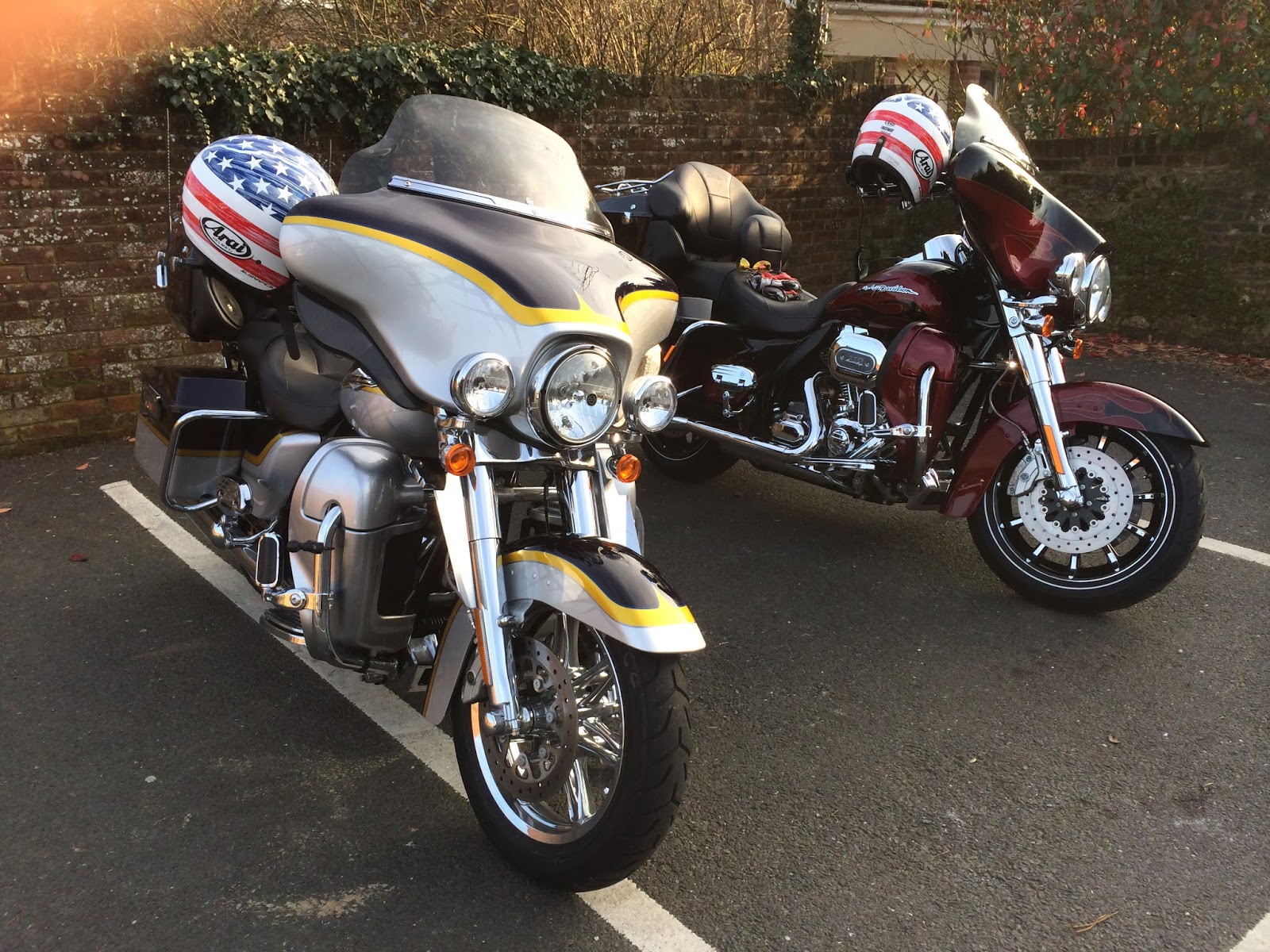 Things are progressing well with our pre-tour technical 'shake-down' testing.   Our bike to bike communications equipment - CB's, are all working well, at all speeds, which is encouraging.  It's thirsty work though! We couldn't  help ourselves pulling into our local pub 'The Jolly Farmer' in Bramley.  It's a very fine example of an English Village pub with a wonderful selection of real-ales, lagers, and great food if you ever find yourselves touring the county of Surrey in England (http://www.jollyfarmer.co.uk) 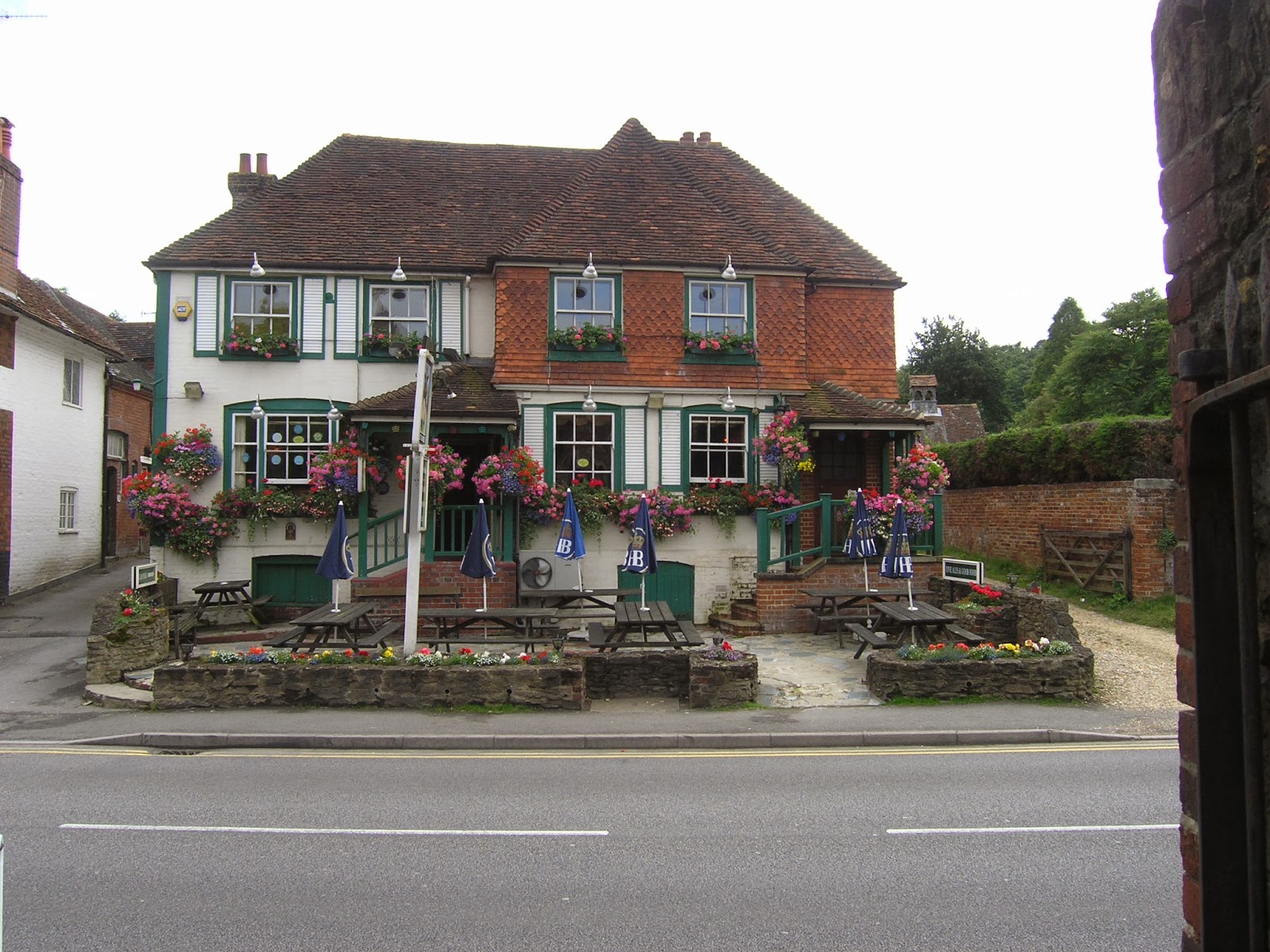 A Kindred Spirit and an Inspiration - Gary France 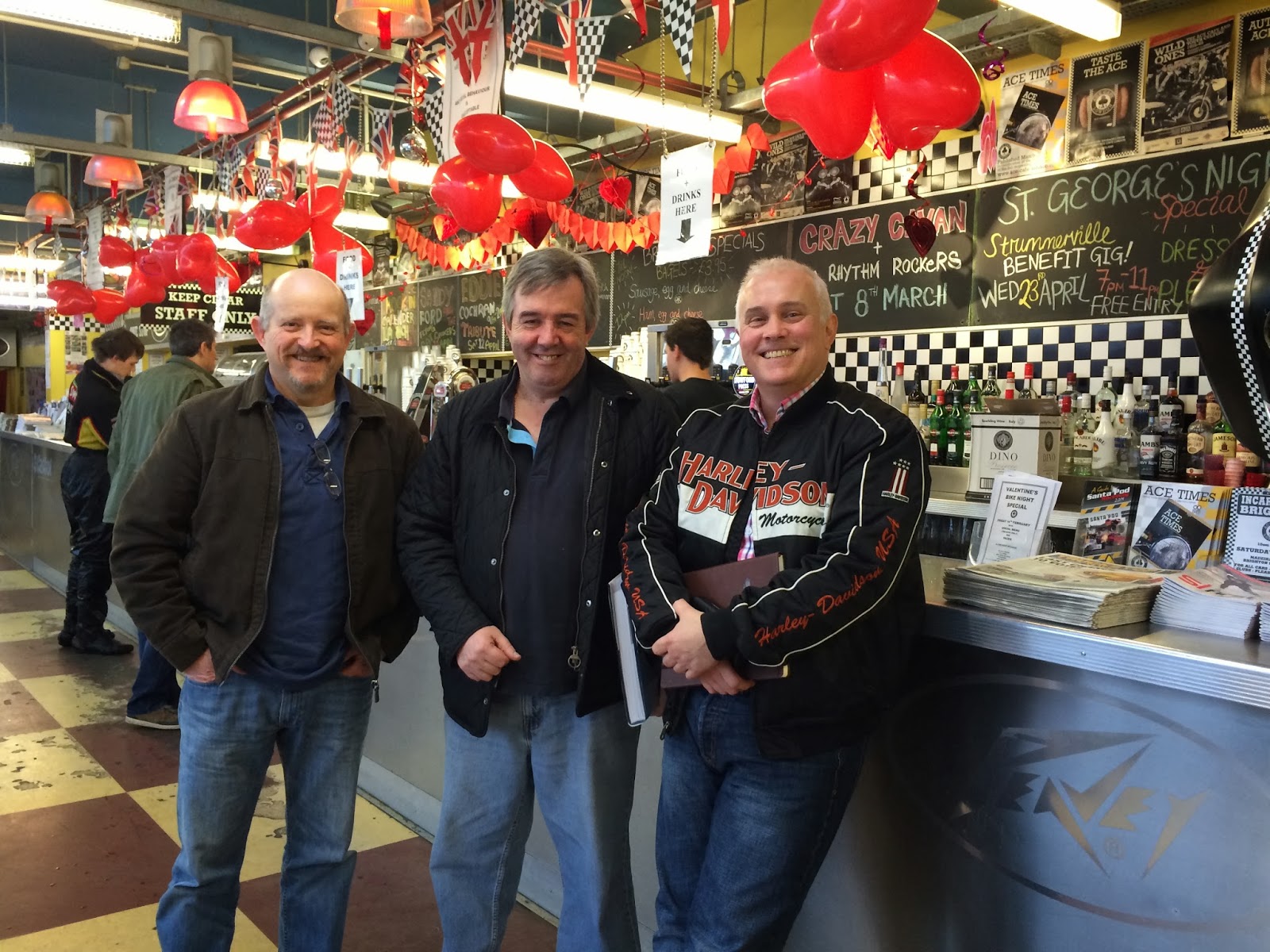 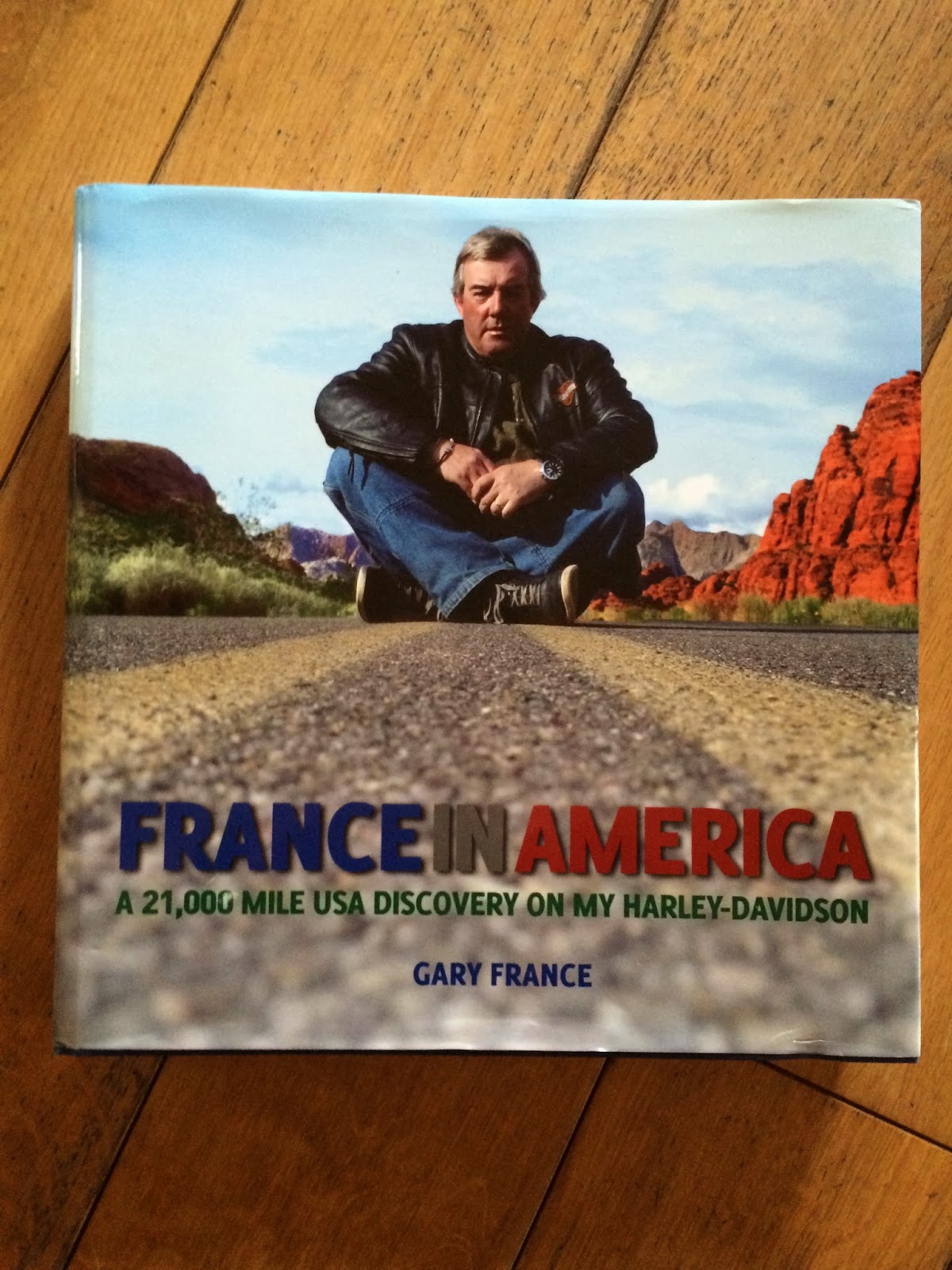 JG and I recently met up with Gary France for lunch at the Ace Cafe (http://www.ace-cafe-london.com).  There is no doubt Gary has been a huge inspiration to JG and I in amongst many other influential books, films and DVD's we have read and watched over the years about motorcycle travel.

In 2013 Gary published his book 'France In America' -  His book covers the wonderful and extraordinary story of his 21,000-mile journey to explore the hidden corners of 27 American states on the back of his Harley Davidson.  It has many breath-taking photographs and is beautifully written which such descriptive writing it will transport you immediately to the many hidden gems and natural beauty that America has to offer.

Check it out, it's a wonderful read and in my opinion worth every penny - Here is Gary's website:

Or indeed order it from Amazon:


Gary was incredibly generous with his time and patiently answered all the questions 'The Blighty-Boys' could throw at him about the fun and challenges of riding a Harley across America - we shall forever be grateful for his wise words, and indeed hope to catch up with Gary in Seattle for a beer during the tour.
Posted by Jaydee at 09:29 18 comments: 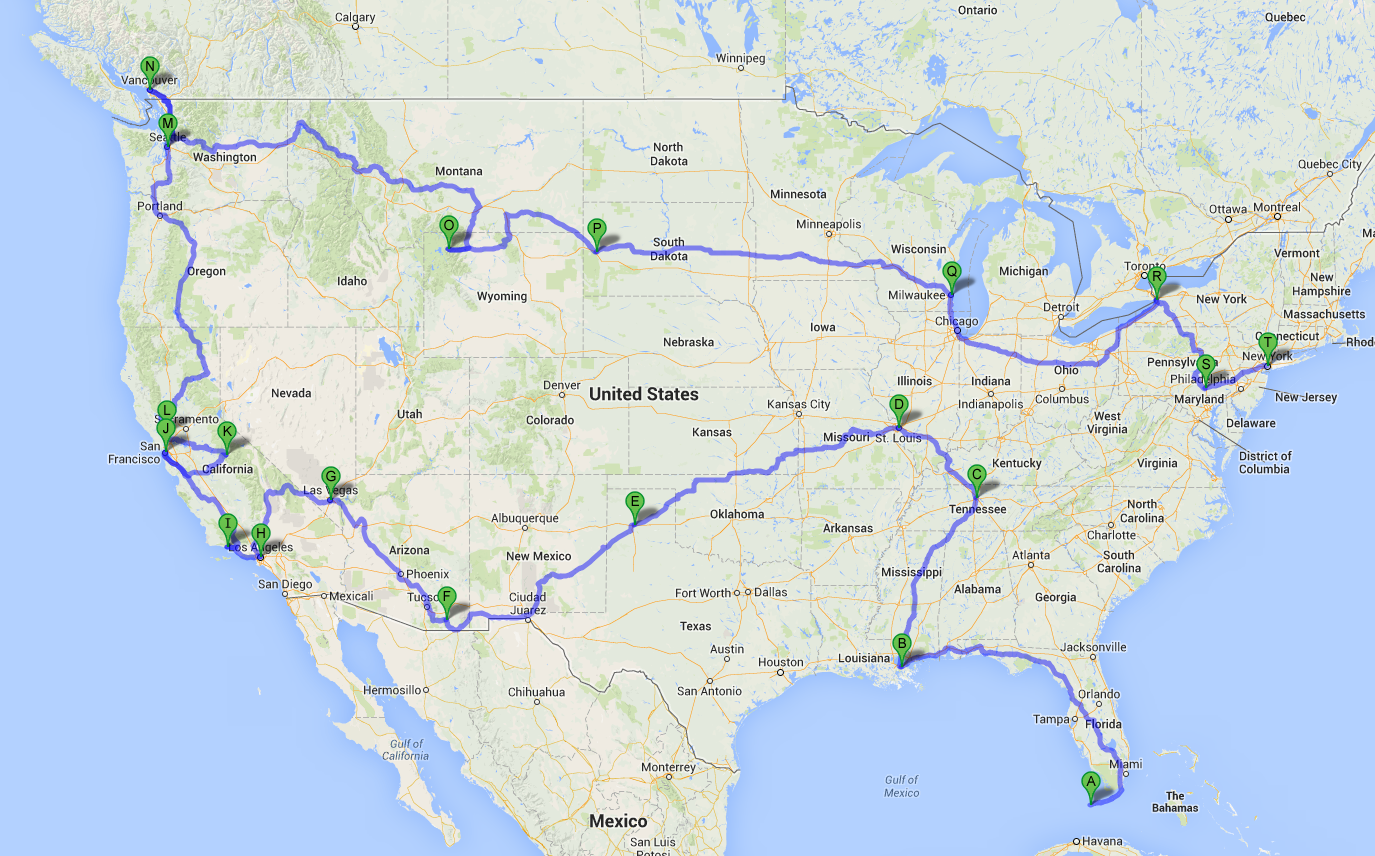 We are still working on the finer details of our route this summer but here is a rough guide.

We collect our bikes in Orlando Florida on the 8th April having decided to start in the south for the warmer weather.  We ride down to Key West over the 'ocean highway' to the southern most point in the continental USA where our adventure officially starts.  From Key West we head up the western coast of Florida and around to New Orleans.  Onwards up into Clarksdale, where they say 'blues-music' was born and then on to Memphis and Nashville.


From Nashville we ride north to St Louis and pick up 'Route 66' and then ride 'the mother road' west for some 1200 miles.  We drop down into New Mexico and Arizona and then north again to the Grand Canyon and Las Vegas.  We continue to head west to Los Angeles and Santa Monica. From here we head north riding almost the entire western seaboard of the USA and on up into Vancouver crossing the border into BC Canada.  Our trip then heads back south into the USA and through the mighty Yellowstone Park and eastwards into the Dakota's and the 'Badlands.'  We continue our ride east towards Milwaukee and the global HQ of Harley Davidson.  From here we track the great lakes around and up towards Niagra Falls and the on towards New England and Cape Cod.  Finally we head towards the 'big apple' rolling into New York City in time for the 4th July Celebrations where our journey ends. 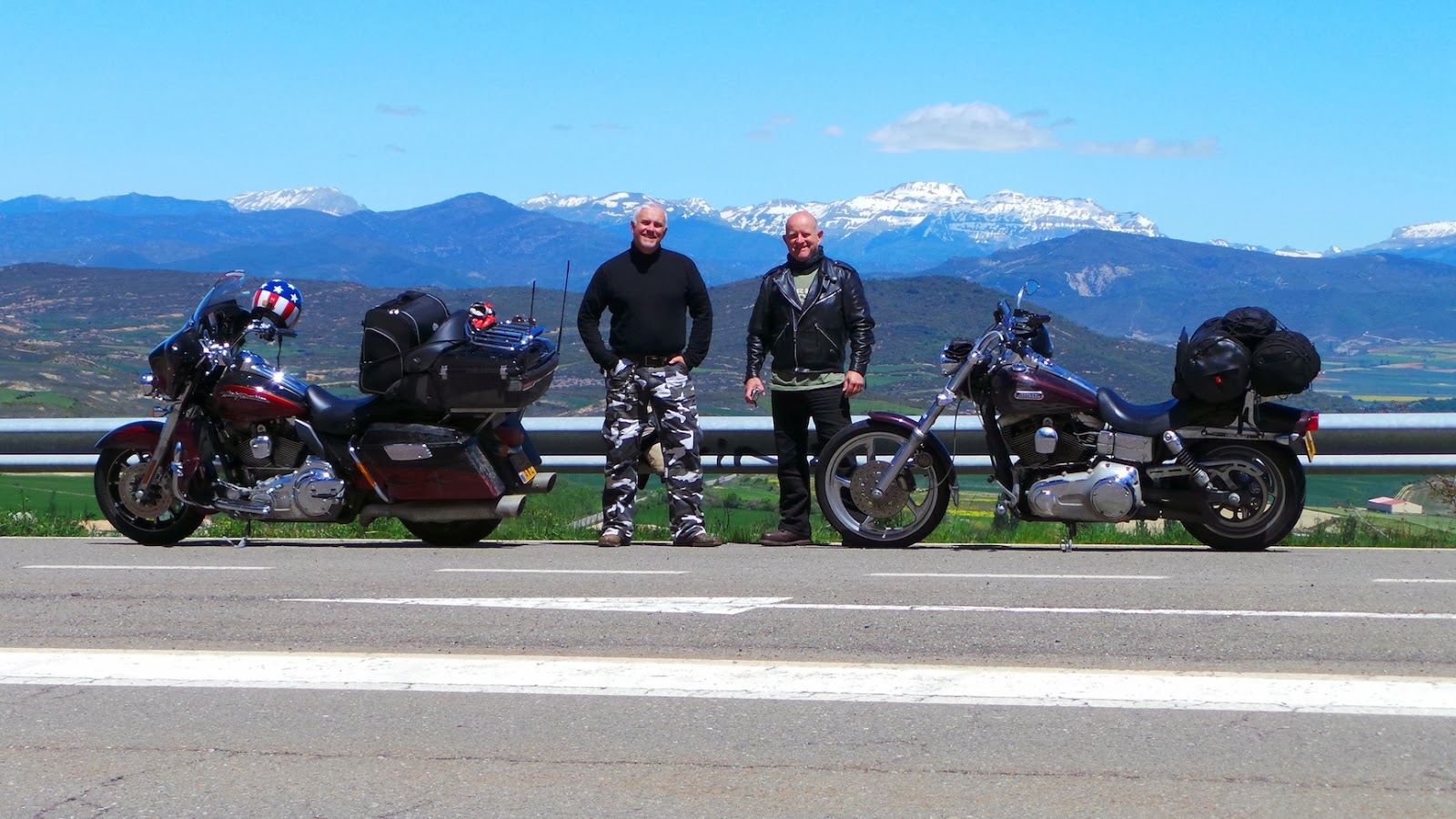 So here we are.  That's JD on the left and JG on the right.

‘JD’ started riding dirt bikes in the deserts of western Iran at the age of ten whilst there with his ‘expat’ family, by which time he had already contracted the disease commonly known as ‘HOG Fever.’ His infatuation, some would say obsession for Harley-Davidsons has been life-long.  Ever since hanging a poster from the film ‘Easy Rider’ as a small boy on his bedroom wall he has dreamed of riding a Harley Davidson across America.  His first HOG was a Heritage Softail Classic (EVO Engine) and subsequently he went on to own a Dyna Wide Glide (EVO Engine) and a Softail Custom (Twin Cam).  Today he rides a CVO Electraglide Ultra Screaming Eagle 110, which he uses for touring and a rare custom ‘CVO Breakout’ used whenever the huge grin on his face needs resetting!

JG’s passion for riding motorbikes started 46 years ago when he learnt to ride an old BSA around a farm field in Derbyshire, England. Followed by a miss-spent youth riding pre-unit Triumph’s that eventually developed into an early fascination for all things ‘American Iron.’  During his youth he was involved as part of the race crew for a big-block Chevy Engine dragster called ‘Panic’ owned by the Page family and raced all over Europe. Ultimately he was seduced by the iconic 45 degree V-Twin Harley-Davidson engine.  He has owned an early Dyna Wide Glide (EVO Engine) and currently rides a Dyna Wide Glide (Twin Cam) as well as his pride and joy a CVO Electraglide Ultra – Screaming Eagle 110 which he uses for touring.

JG’s motto for life is from the Latin “illigitamus carborundum.”