Of all the national parks Yellowstone was on our "bucket list" so we were both really looking forward riding in here on Saturday 31st May.  We entered the park from the West Entrance from our ride down from Big Sky.

Yellowstone National Park is located primarily in the U.S. state of Wyoming, although it also extends into Montana and Idaho. It was established by the U.S. Congress and signed into law by President Ulysses S. Grant on March 1, 1872.

Yellowstone was the worlds first  designated National Park and is a world heritage site and biosphere site.

The park sits on a massive volcano called the Yellowstone Caldera or the volcanic caldera or super volcano, which was a bit of a worry because it is active and one day it just may "blow." Some scientist and sensational journalist predict that if the world's largest super-volcano did erupt it could wipe out two-thirds of the U.S.  This is the nightmare that scientists are predicting could happen if the world’s largest super-volcano erupts for the first time in 600,000 years, as it could do in the near future.  Yellowstone National Park’s caldera has erupted three times in the last 2.1million years and researchers monitoring it say we could be in for another eruption.  They said that the super-volcano underneath the Wyoming park has been rising at a record rate since 2004 - its floor has gone up three inches per year for the last three years alone, the fastest rate since records began in 1923. 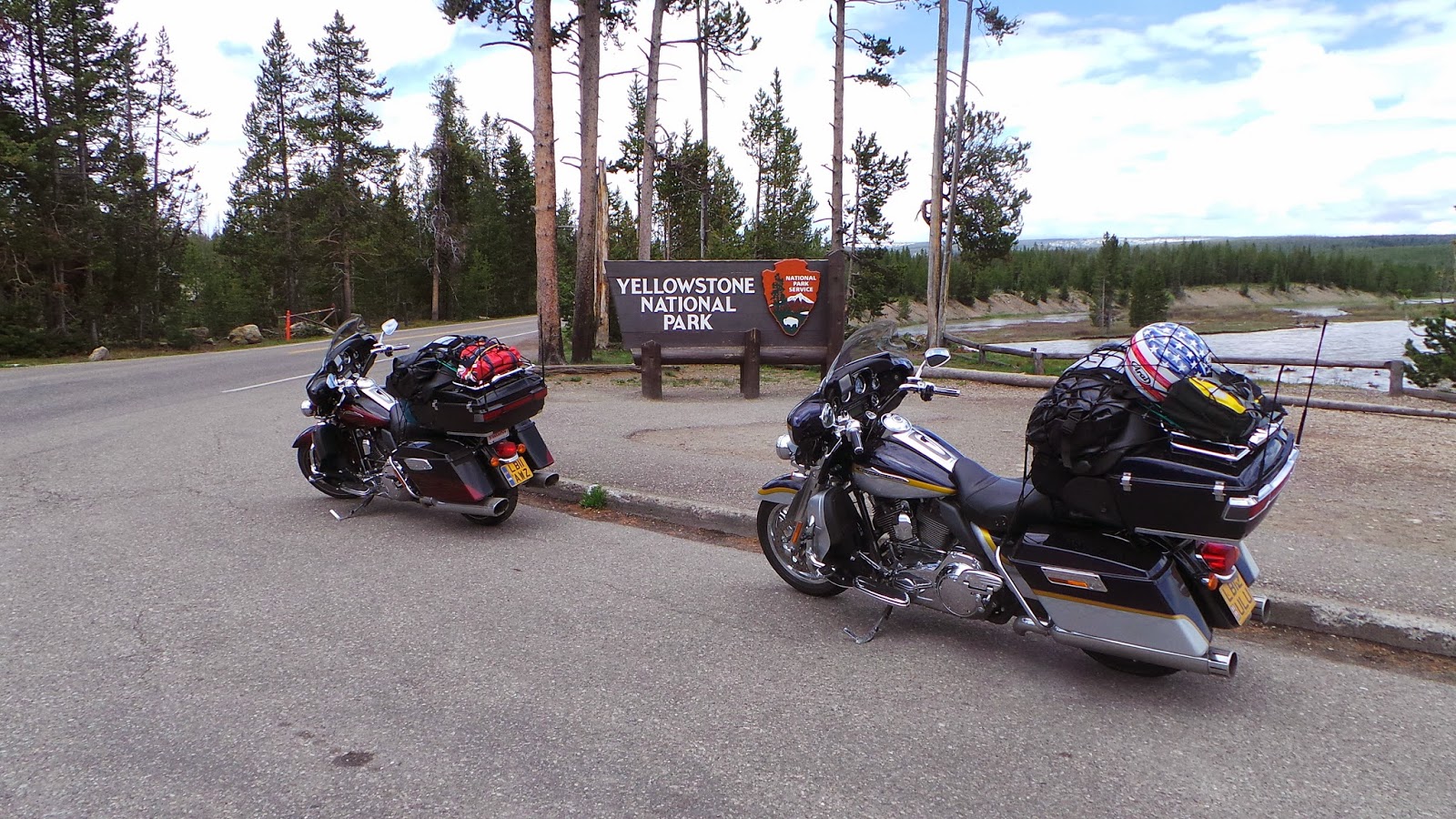 The bikes and The Blighty-Boys prepare for some time on top of the largest volcano on the planet and riding some of the 2,221,766 acres of Wyoming wilderness. 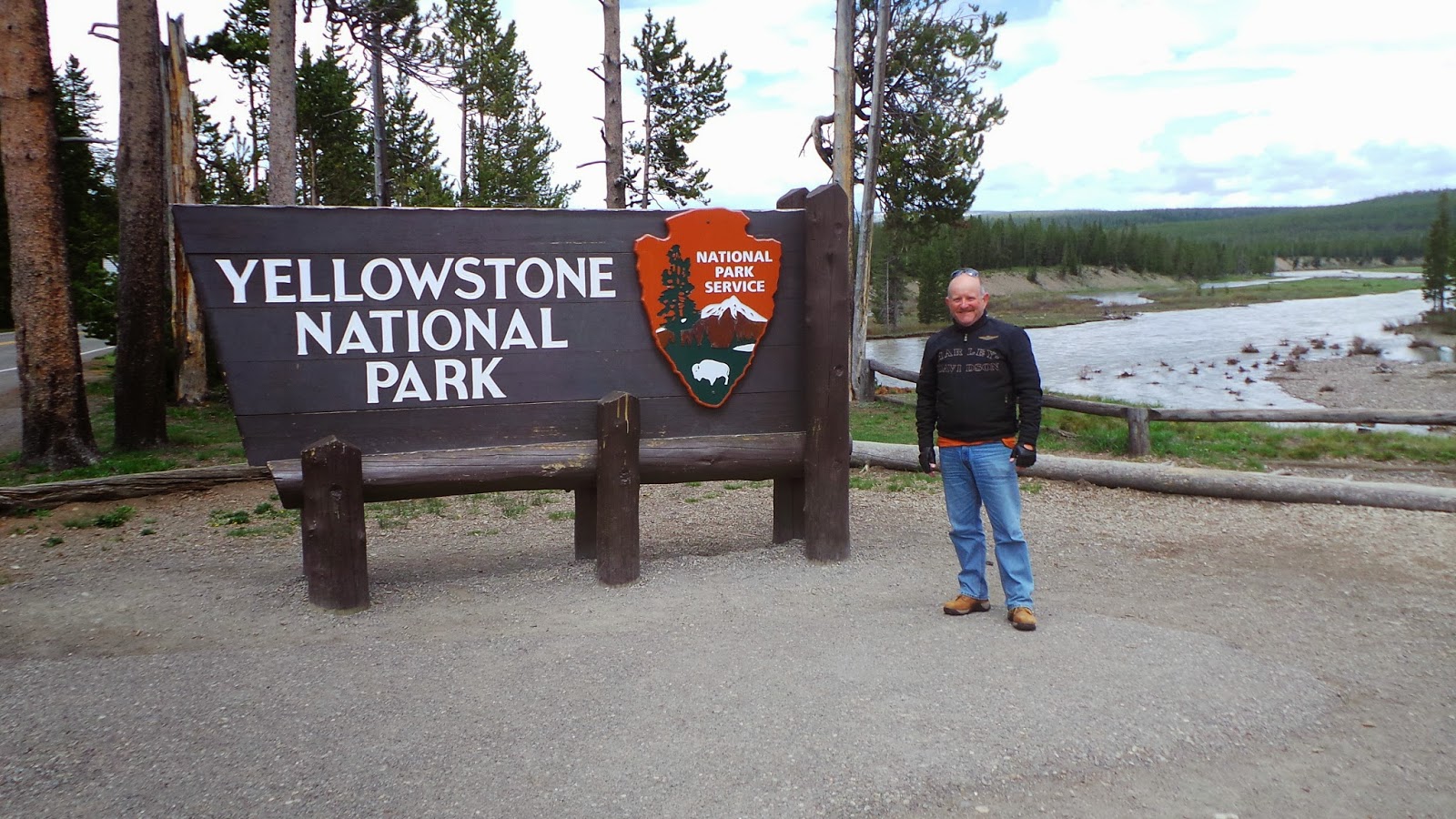 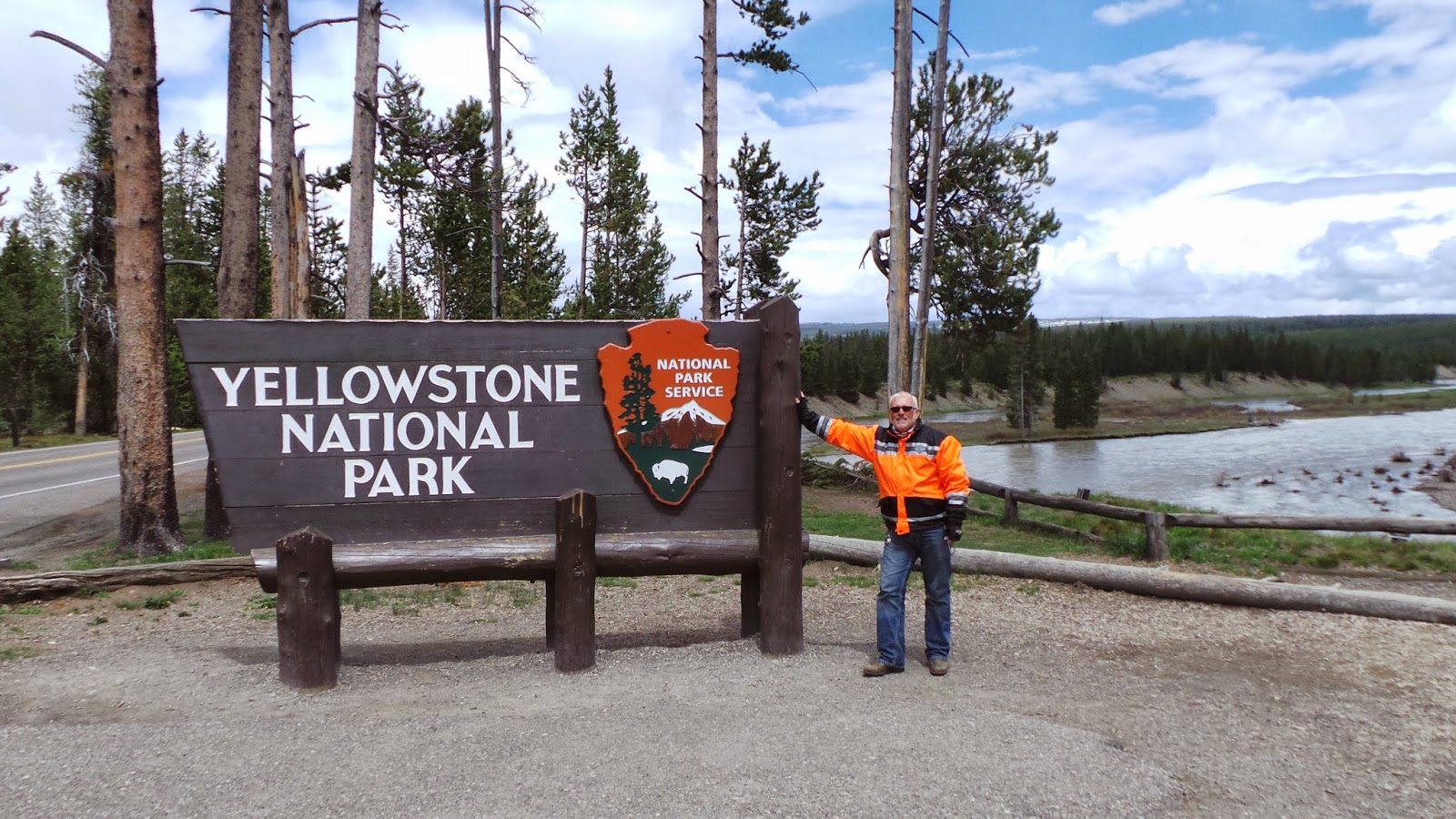 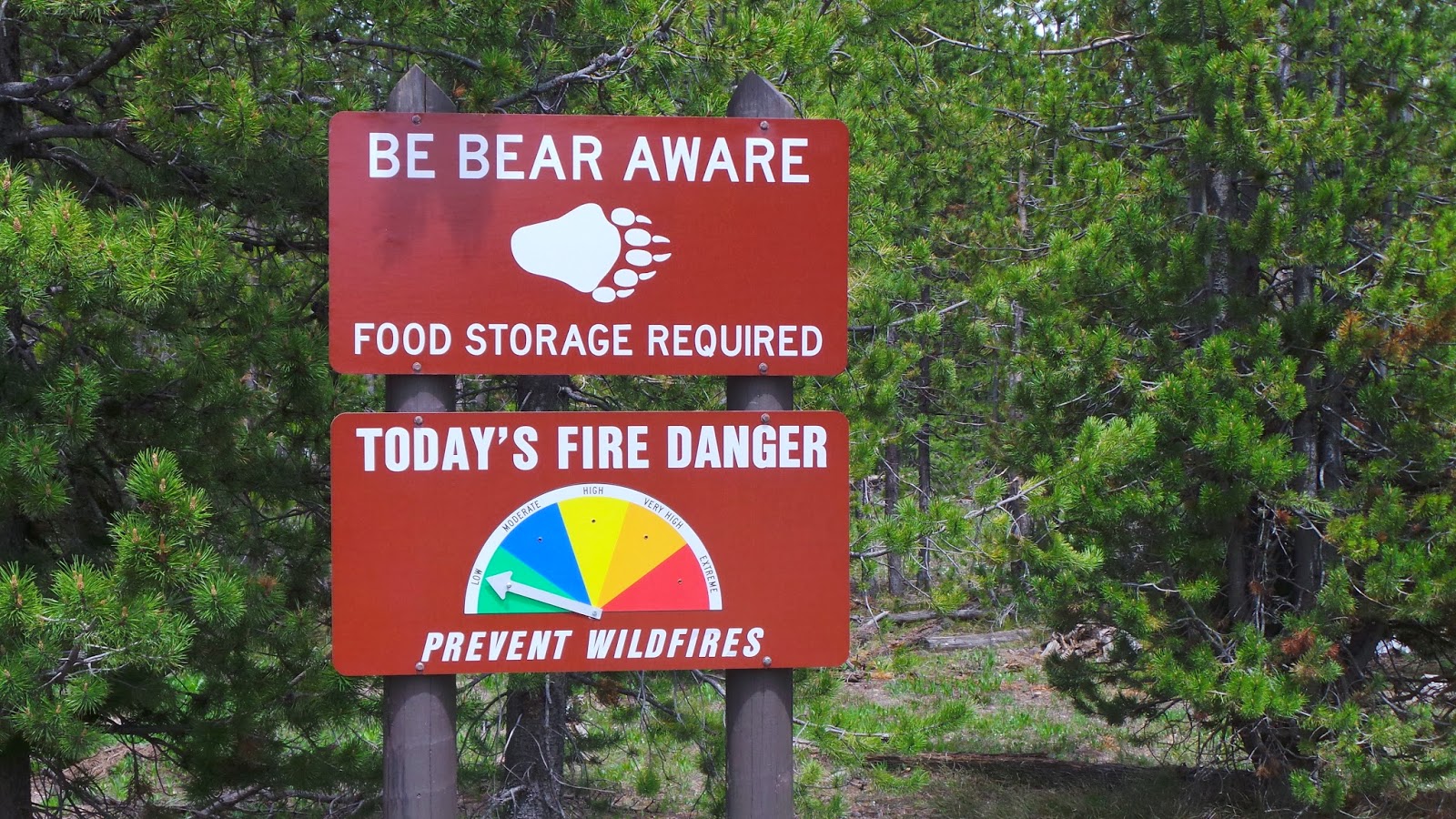 After seeing this sign we were hoping to see some grizzly bears or brown bears but sadly they were not around that day.  "Yogi and Boo-Boo" must have scared them all away (yes we know that was "Jellystone Park") 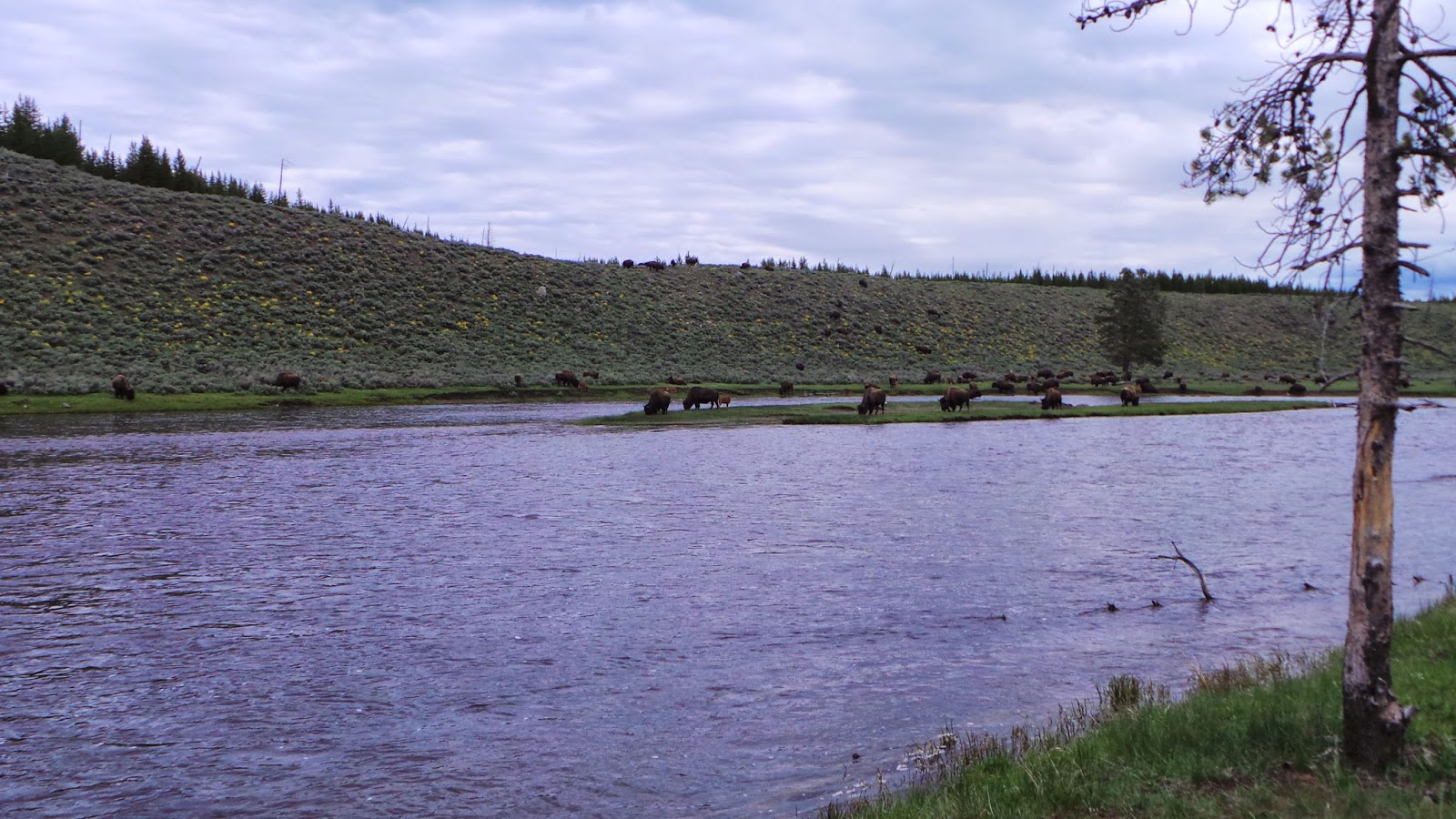 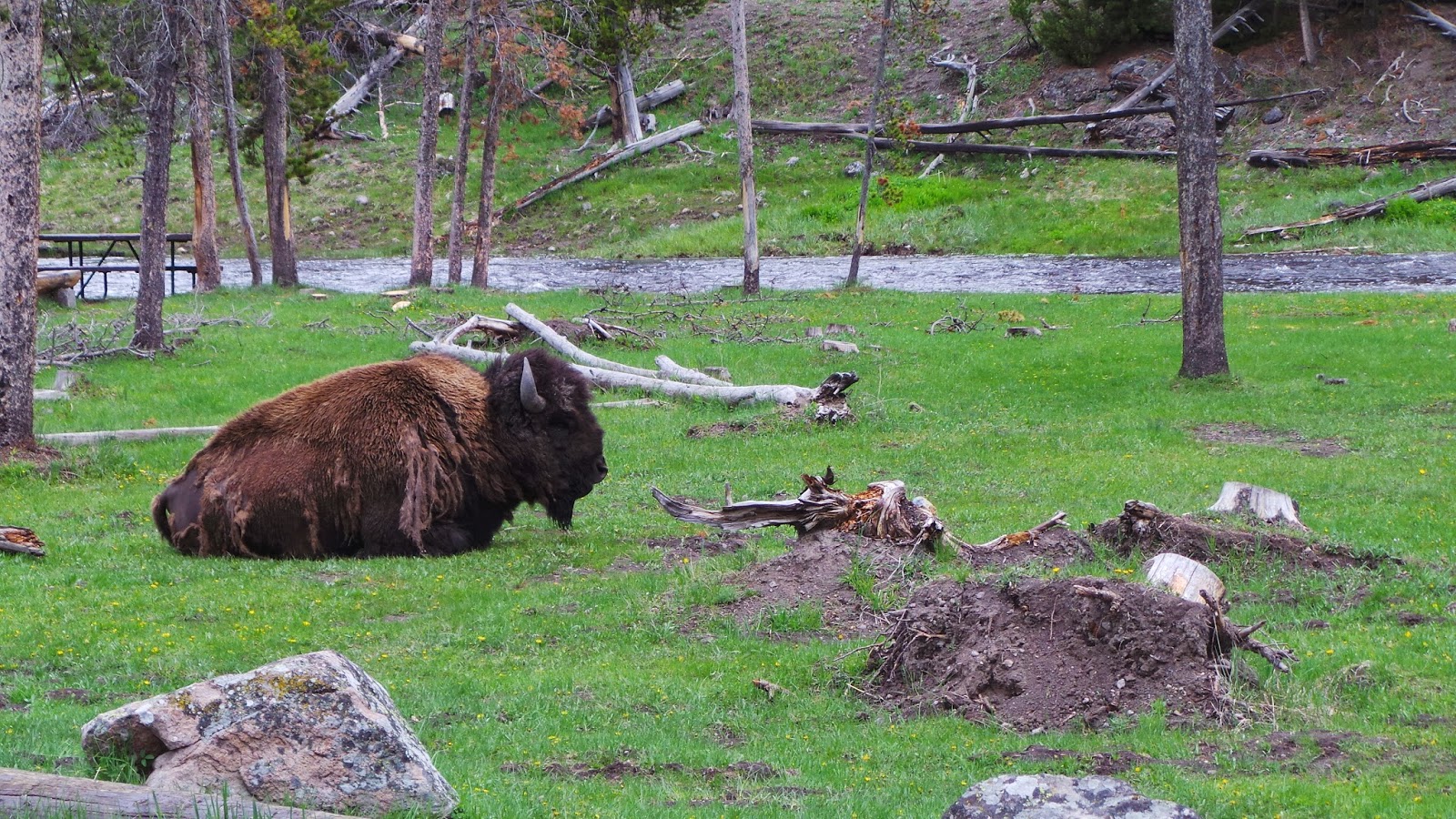 Some big males just chilling out.  But don't be fooled.  These beast can run at 20 - 25mph and have been know to charge and batter cars.  Just think what they could do to a motorcycle.  Sadly each year people are killed by driving into these majestic beasts in their cars, which we assume must happen at night because they are hard to miss in daylight.  Apparently Bison eyes don't reflect in headlights. 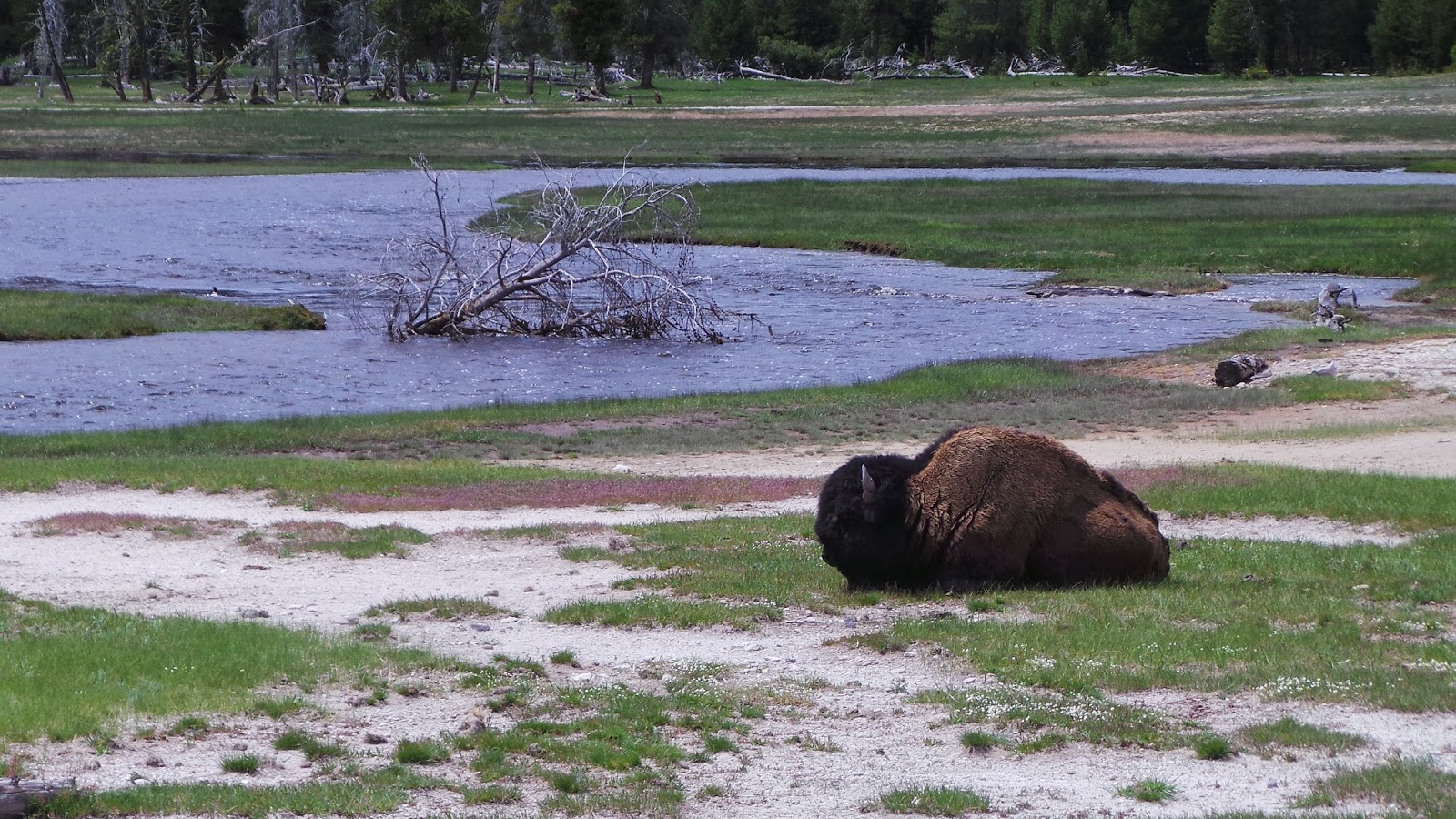 Great to see them still thriving here in Yellowstone Park and quite sad to think that they were slaughtered in their millions and nearly became extinct more than 100 years ago. 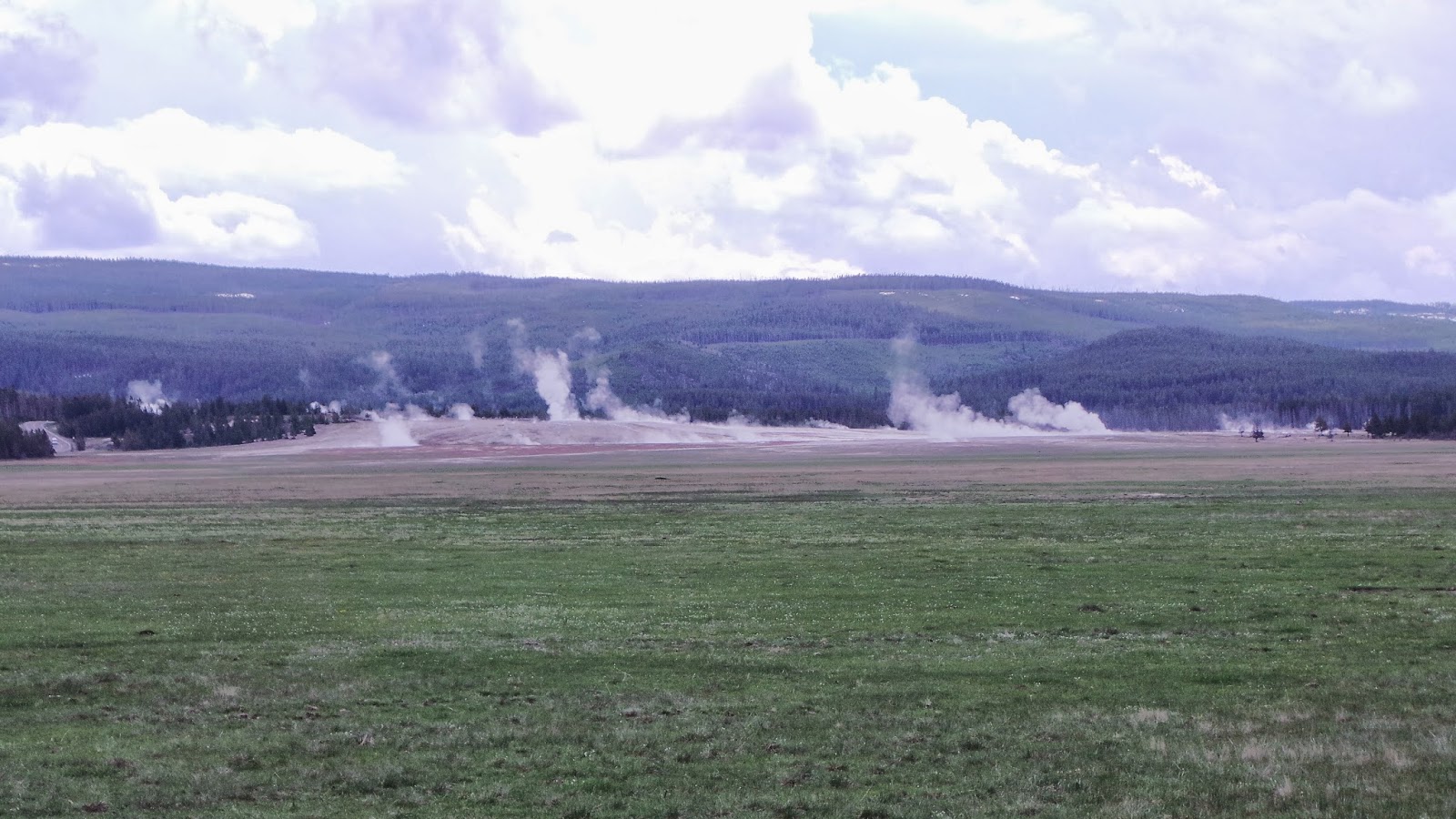 The lower Geyser Basin in the distance on the western side of the park.  See the sulpha steam plumes rising.  A real nice smell of rotten eggs as you approach them 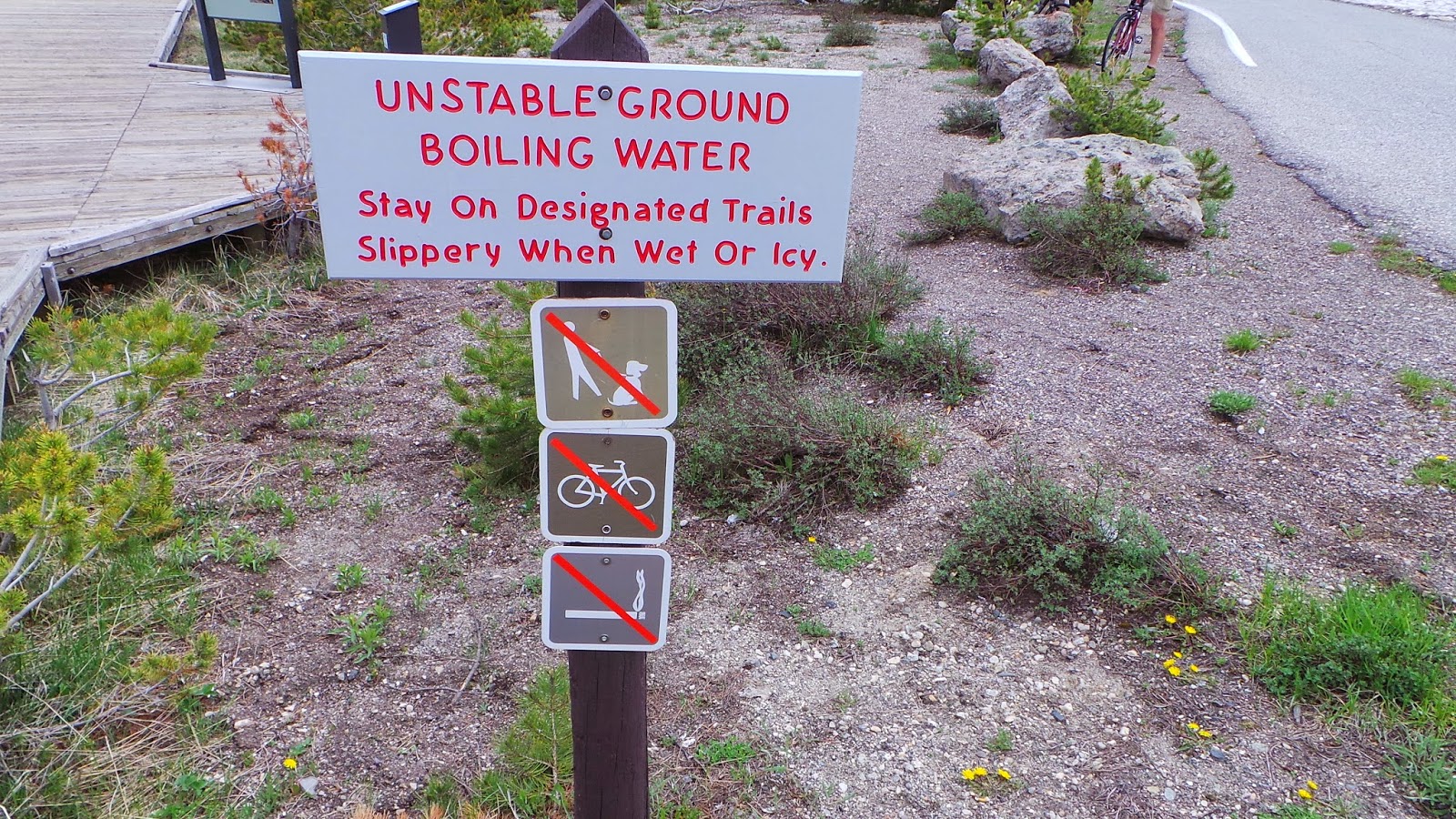 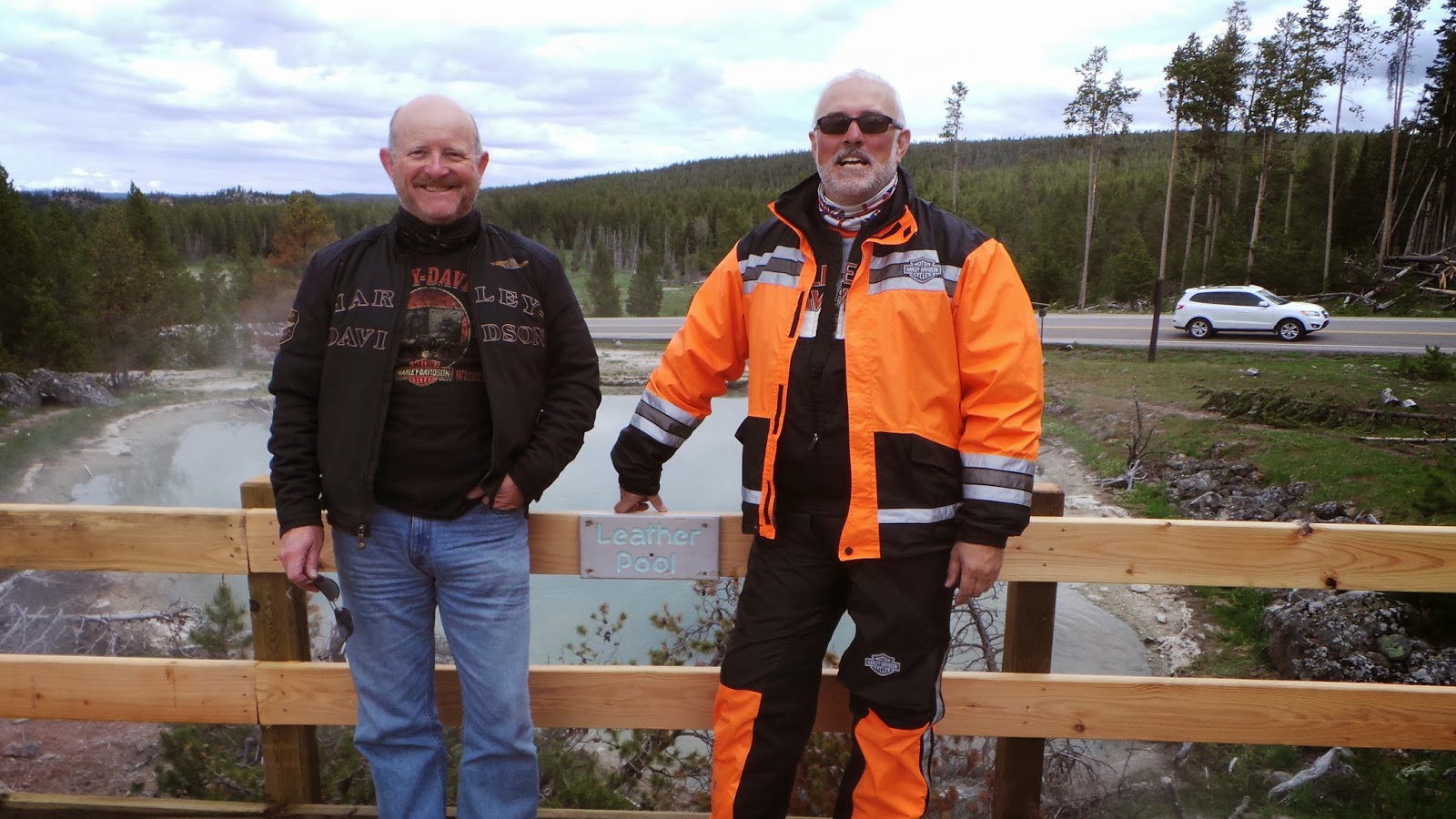 A couple of "old geysers" meet a real Geyser! 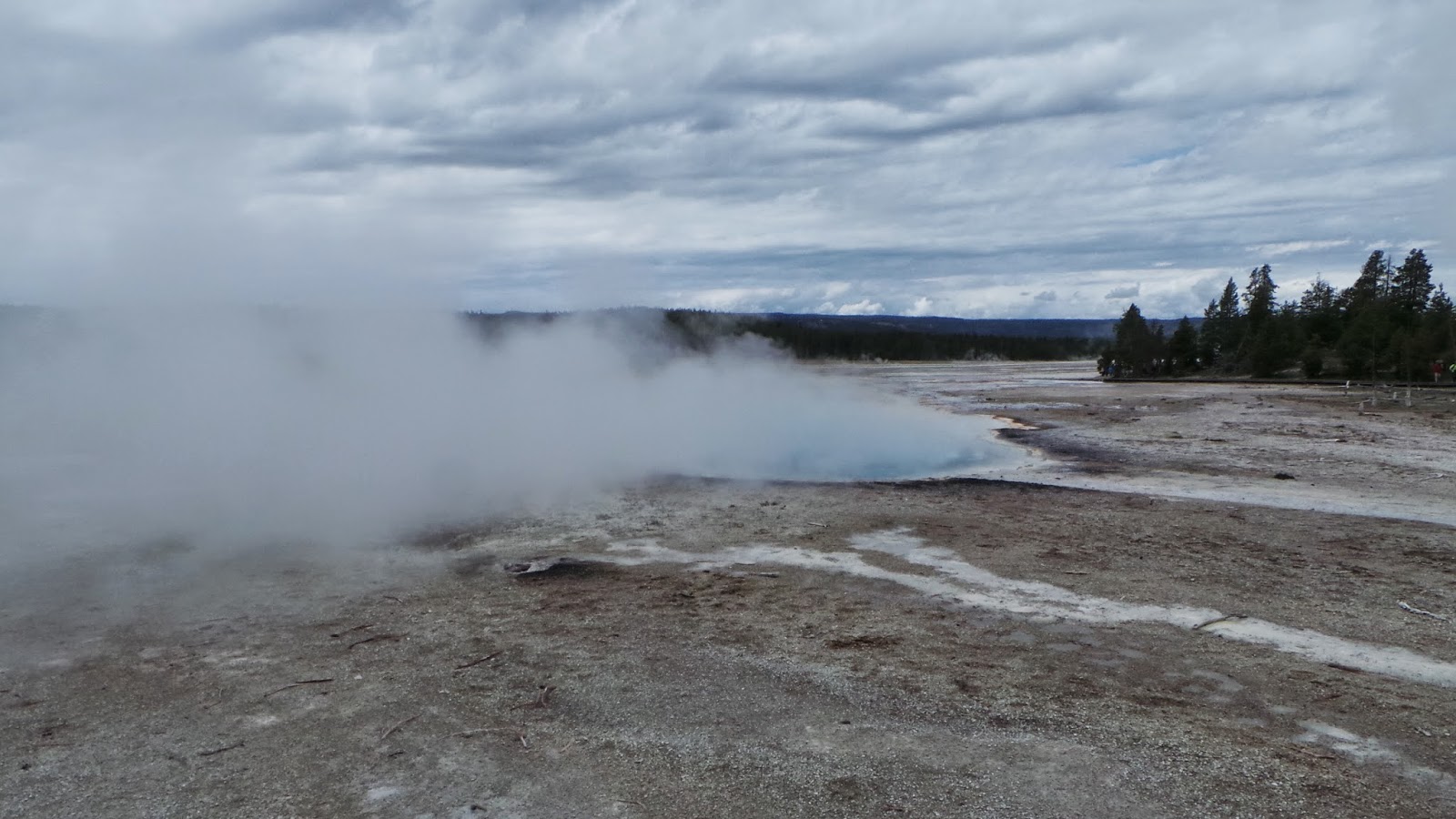 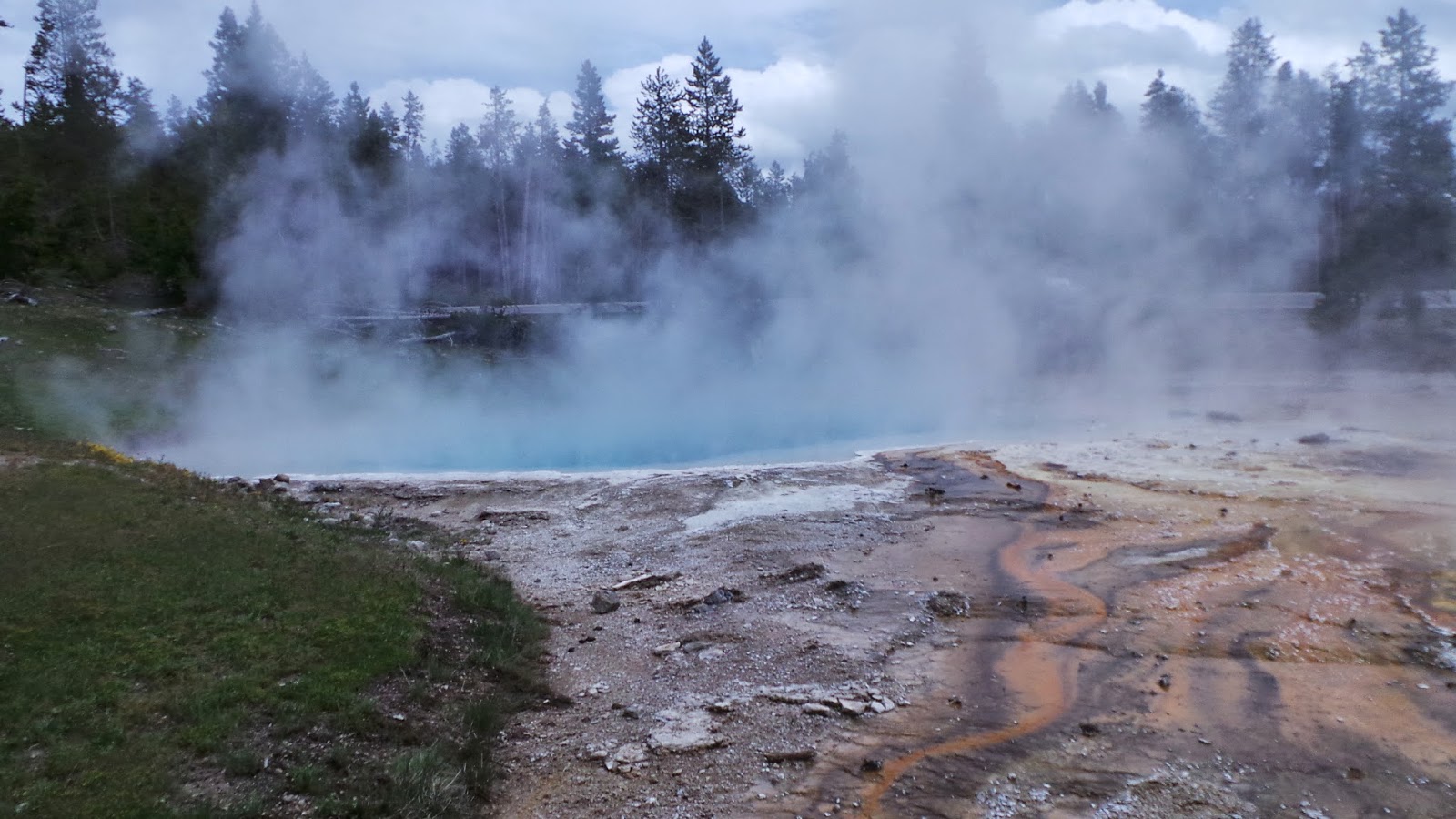 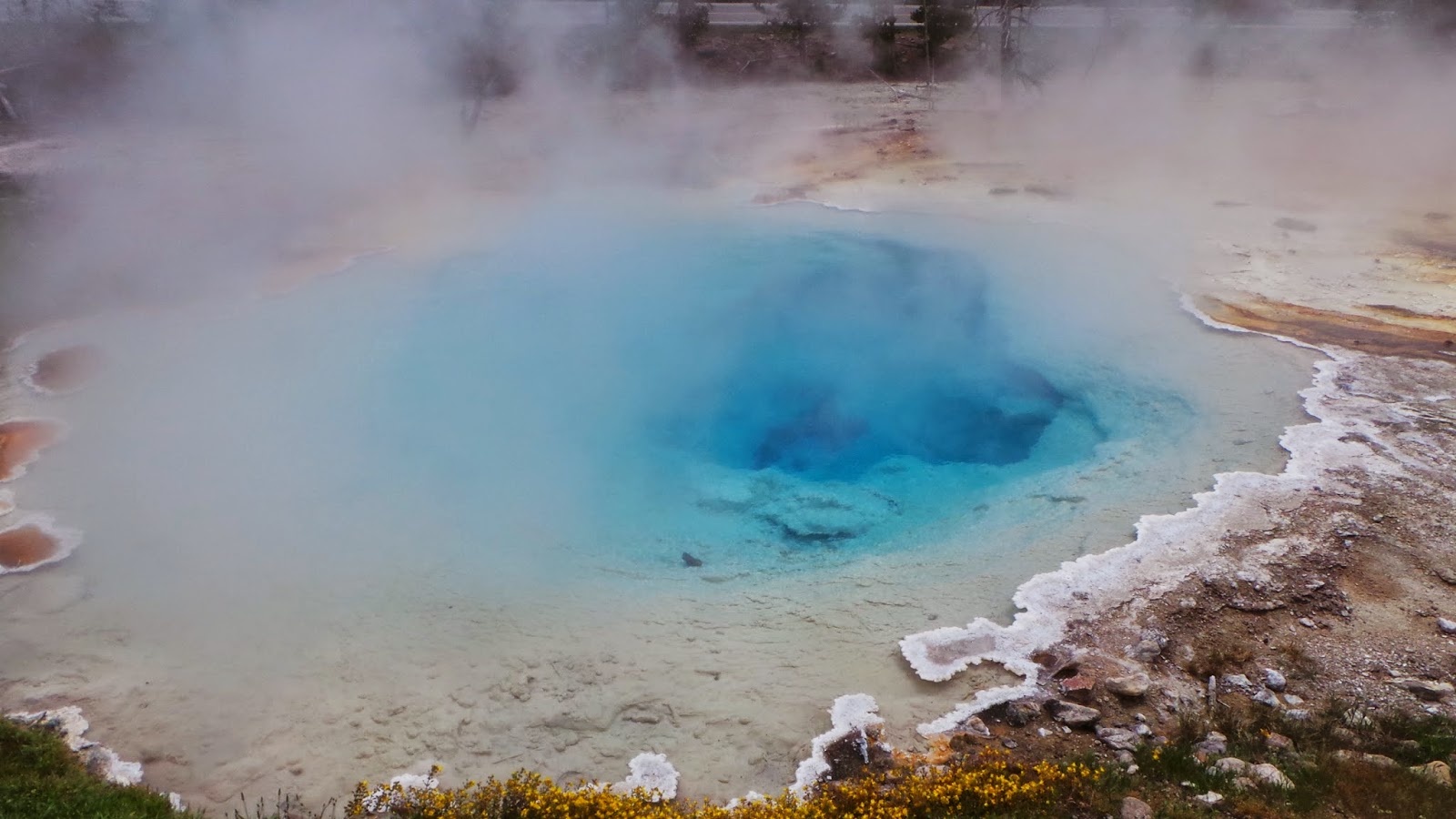 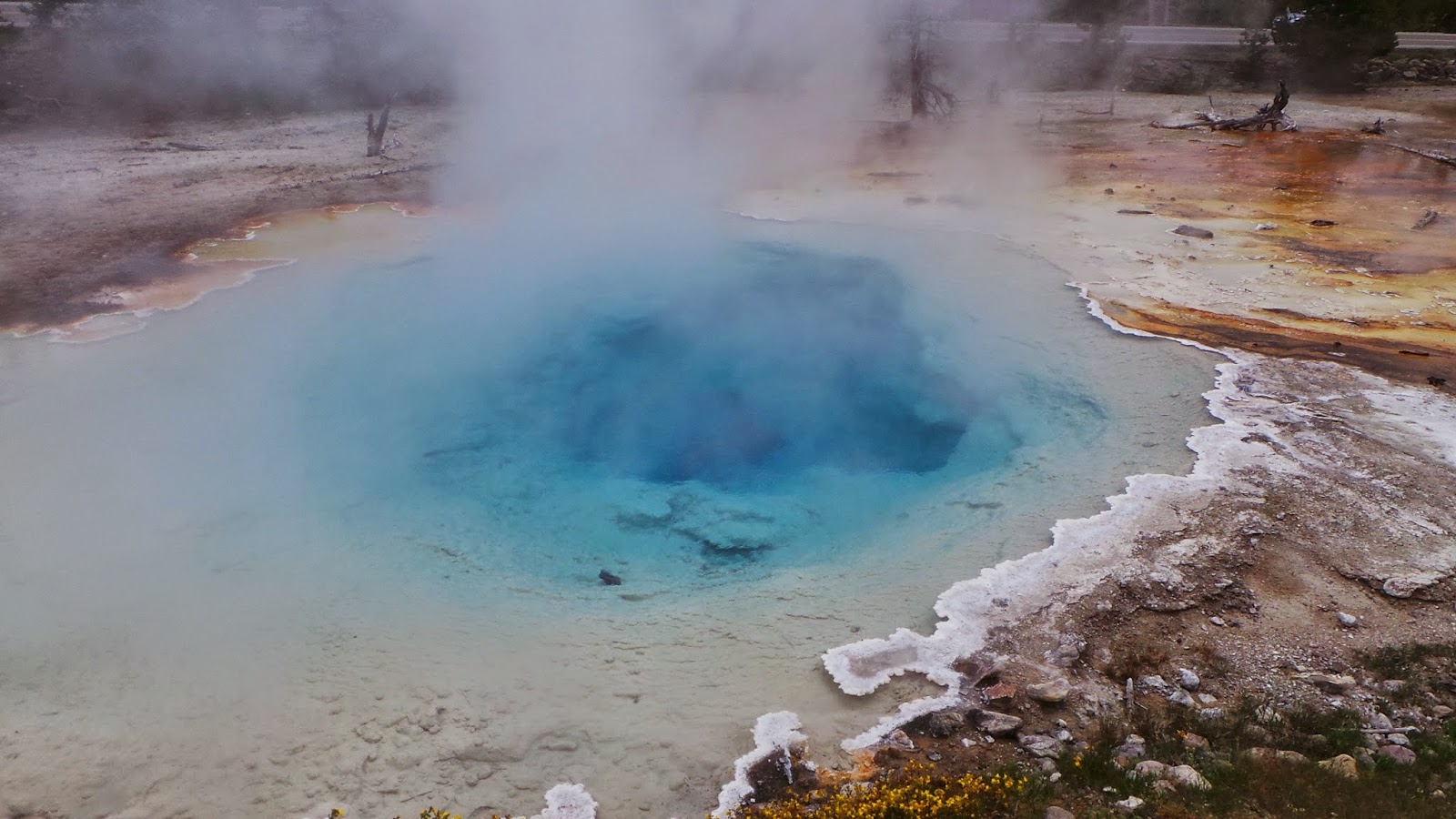 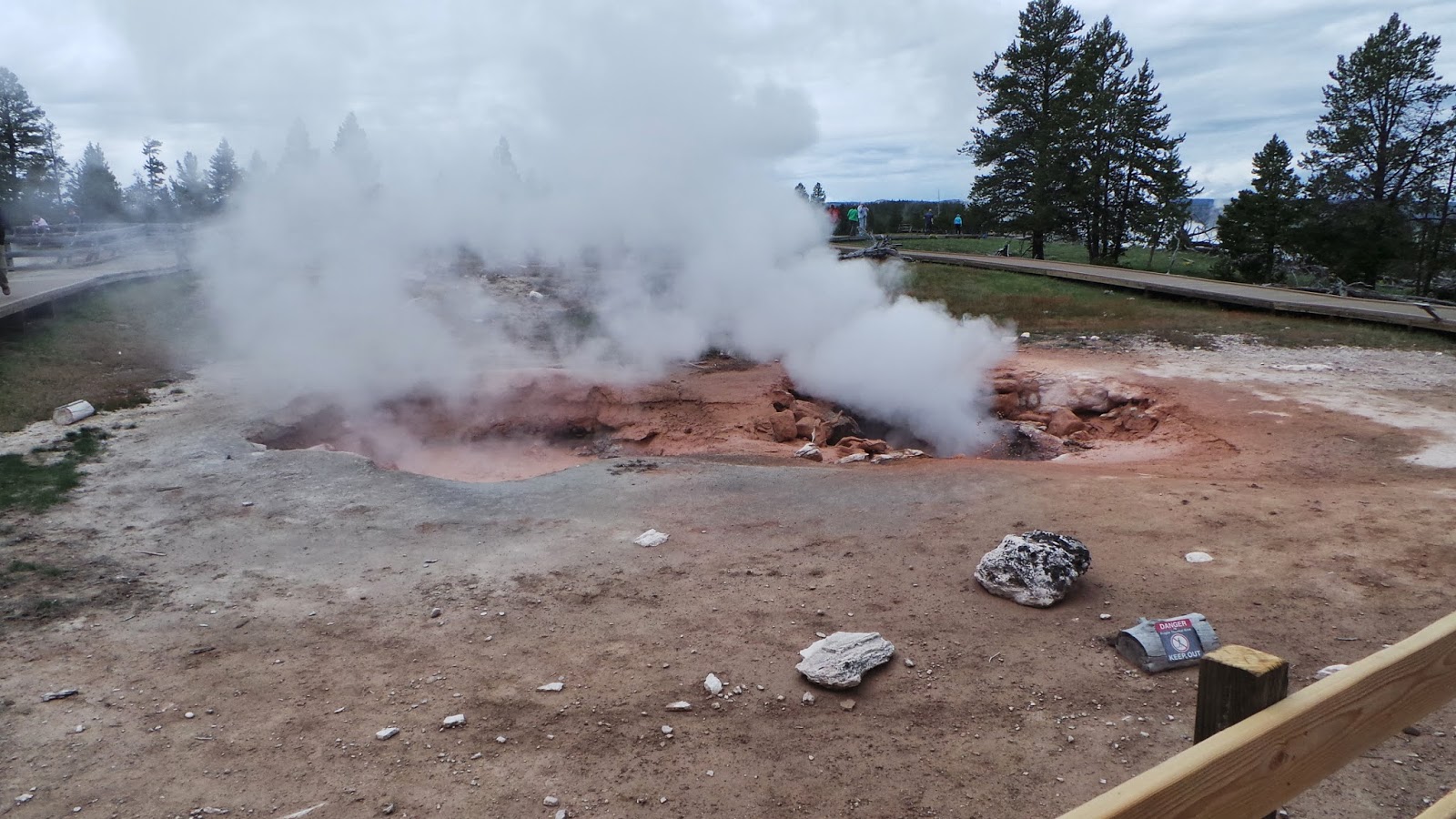 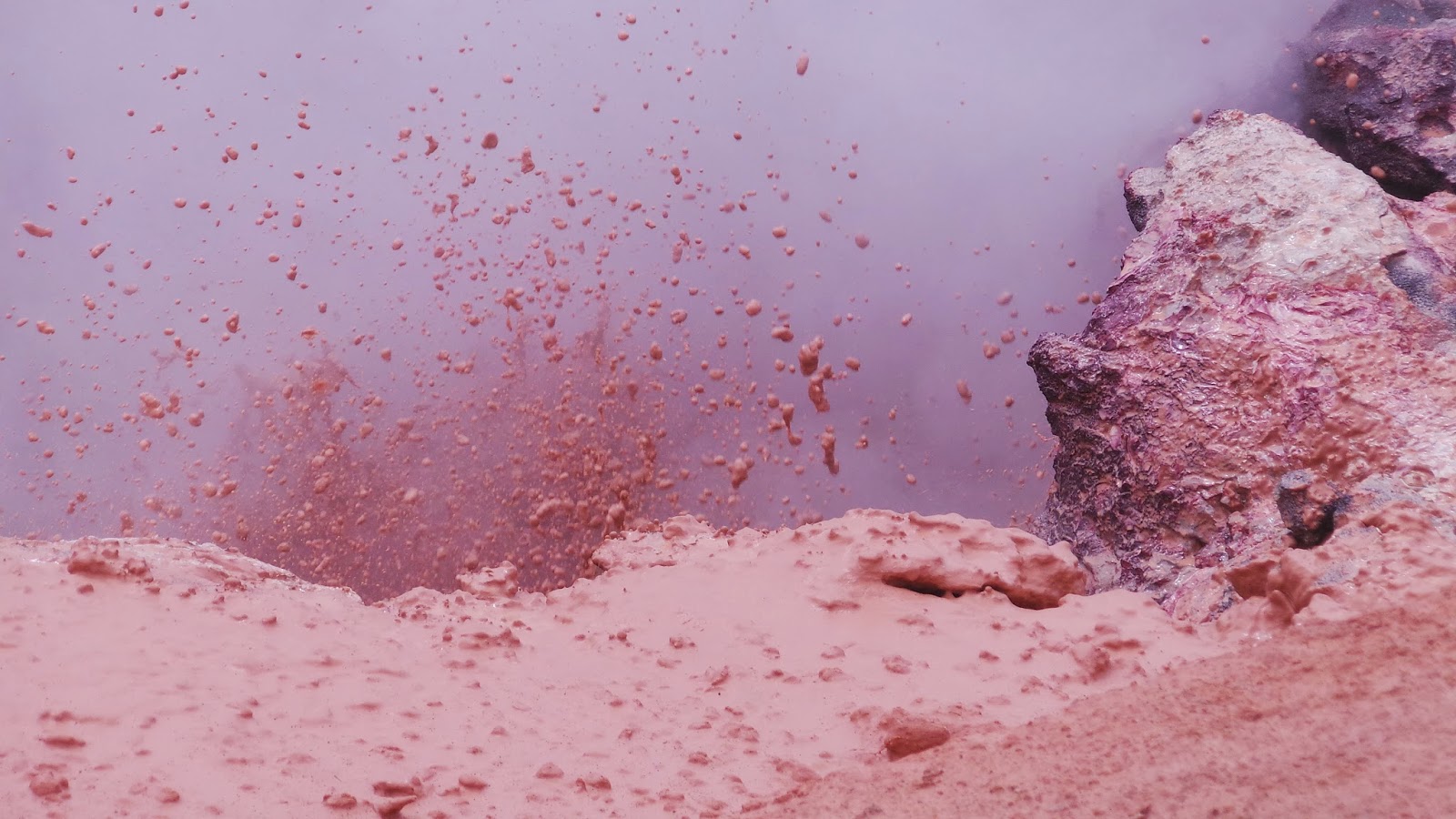 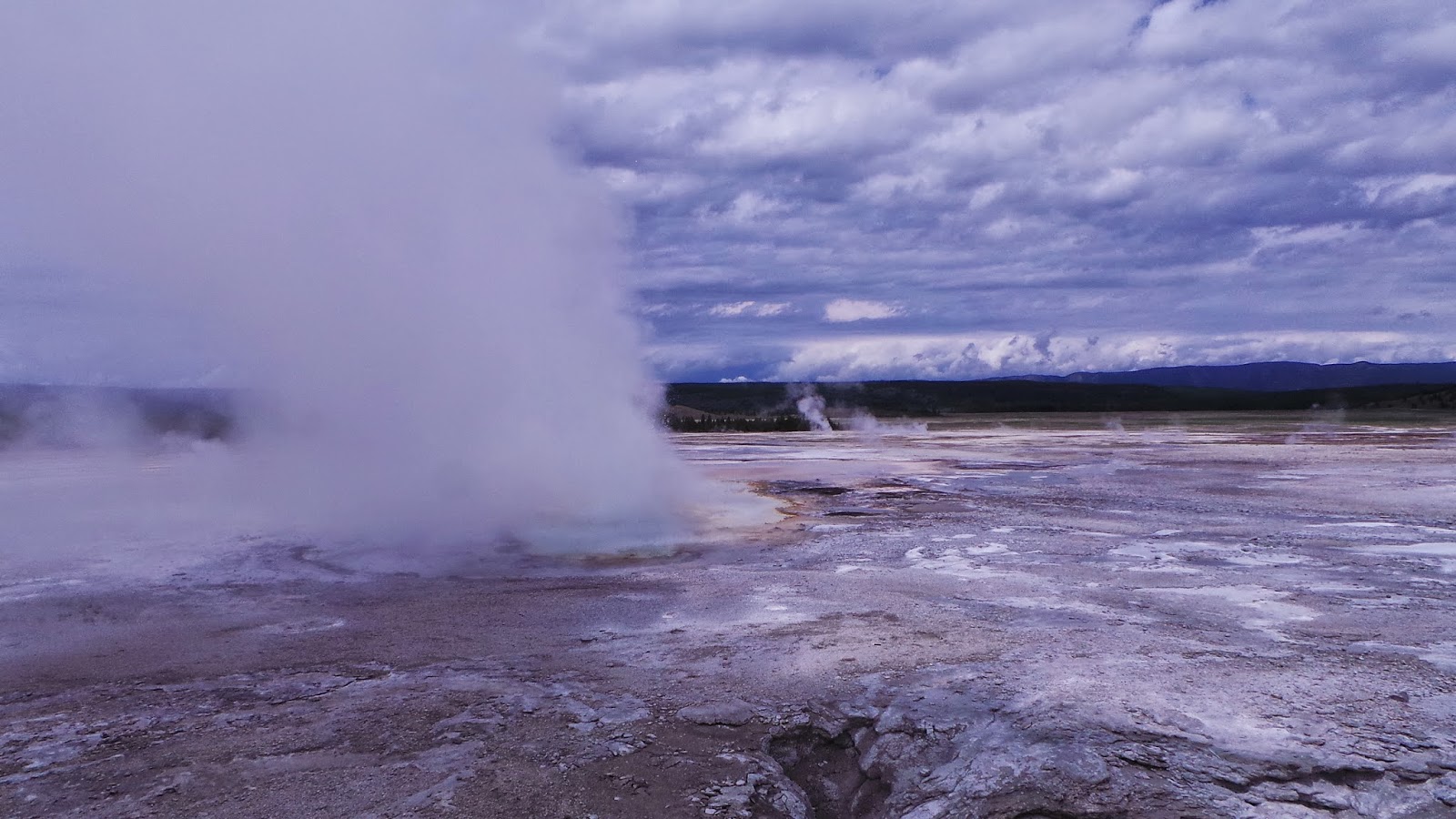 Another old 'Geyser' getting excited 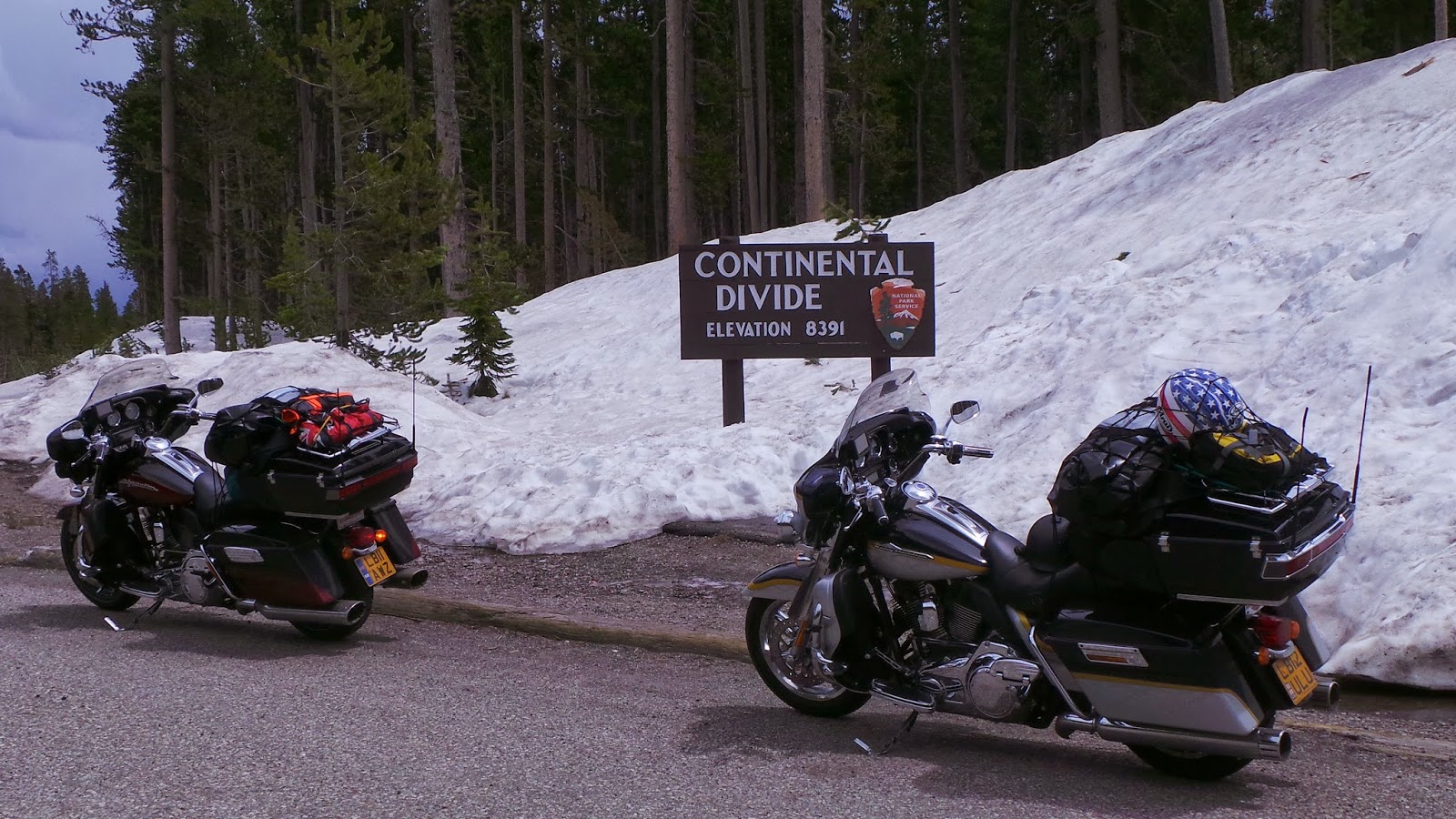 8,391 feet thats approximately 2,560 metres and cold, just look at the snow here at the Continental Divide.  This is where rivers start to run either east to the Atlantic Ocean or West to the Pacific Ocean.  It's amazing to think this because those oceans are thousand miles away from this point. 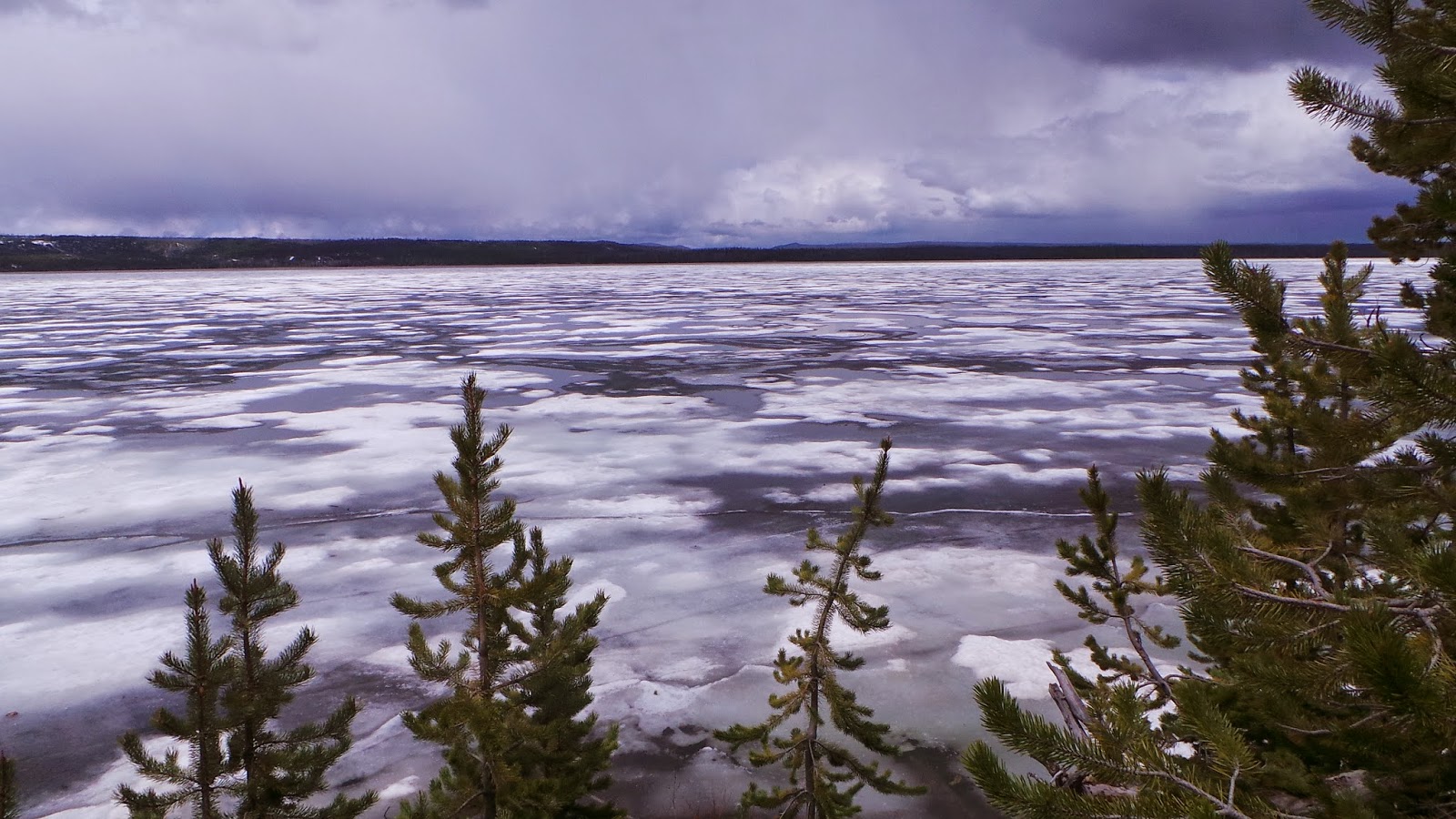 Lewis Lake in the south of the park still thawing, but still very frozen and cold at 8,200 feet or some 2,500 metres up 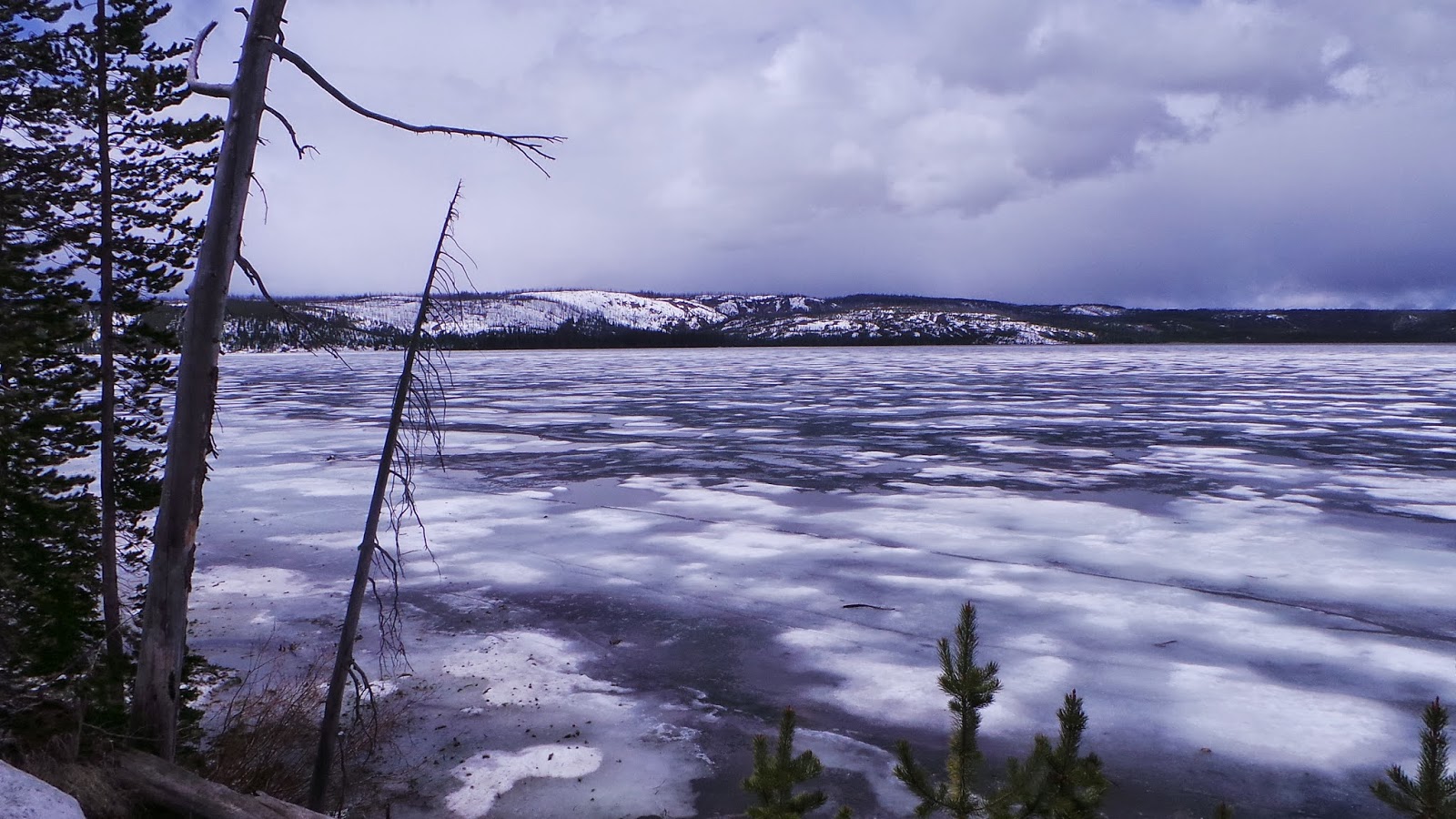 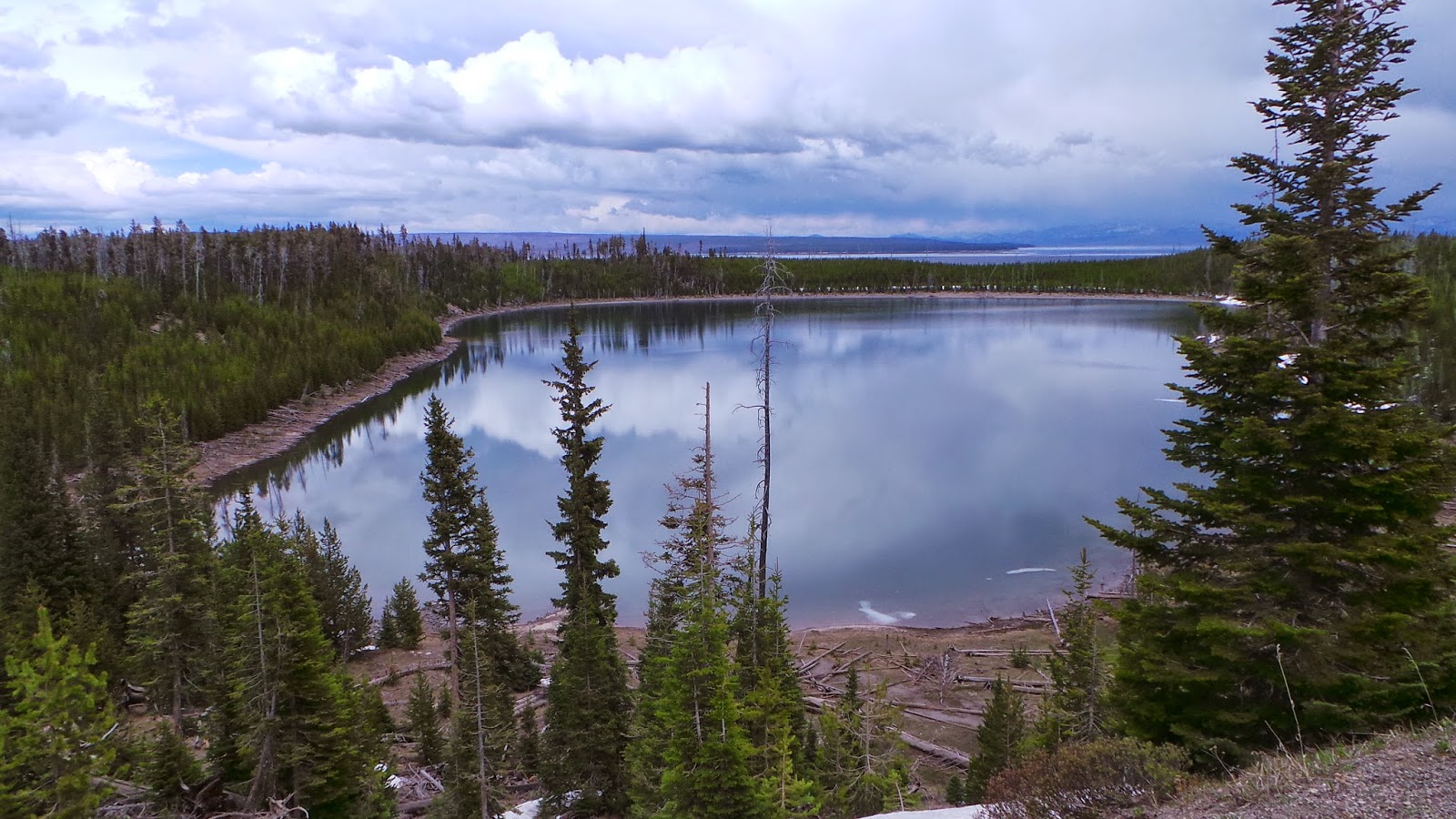 West Thumb on the south eastern side of the park 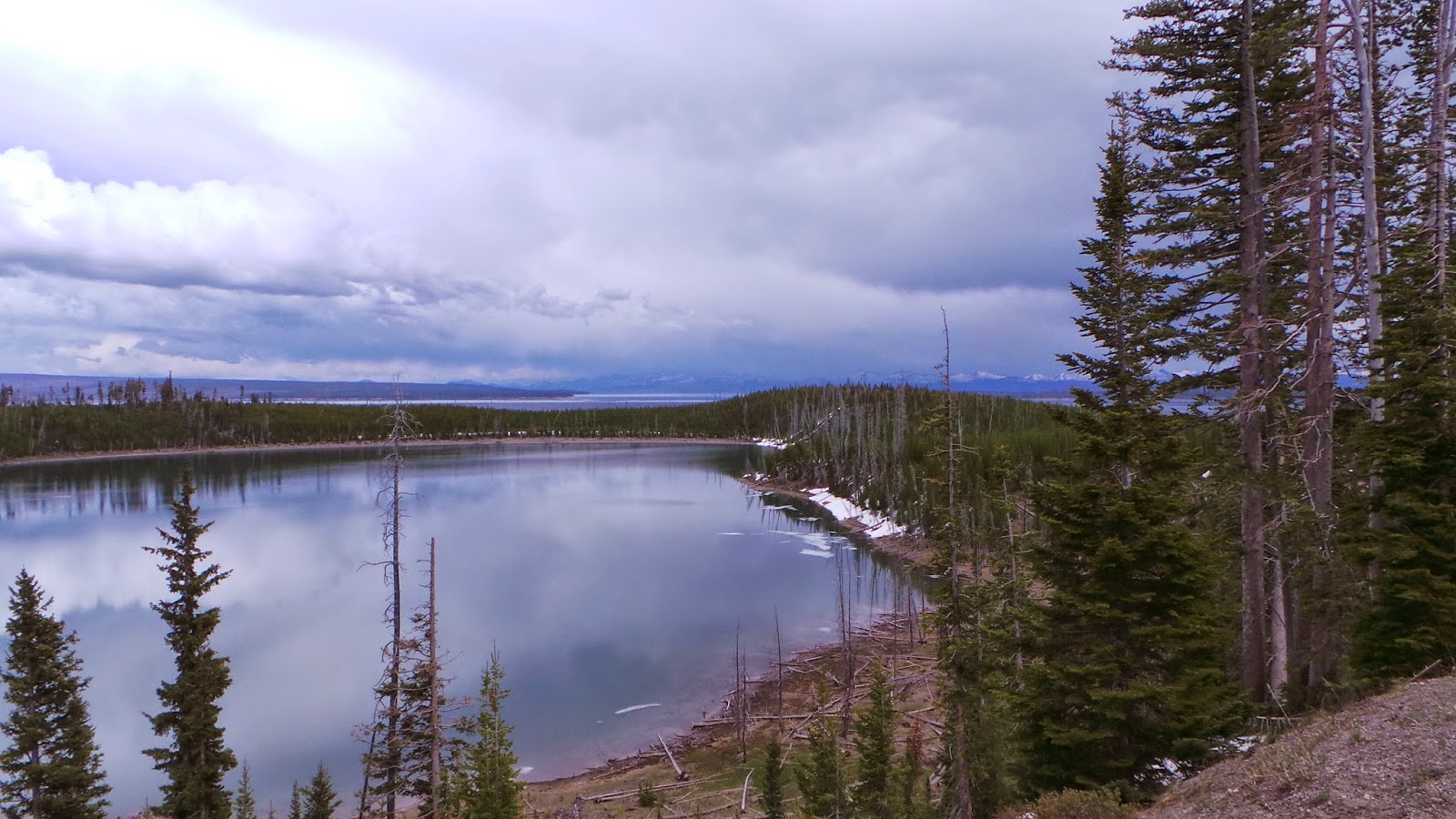 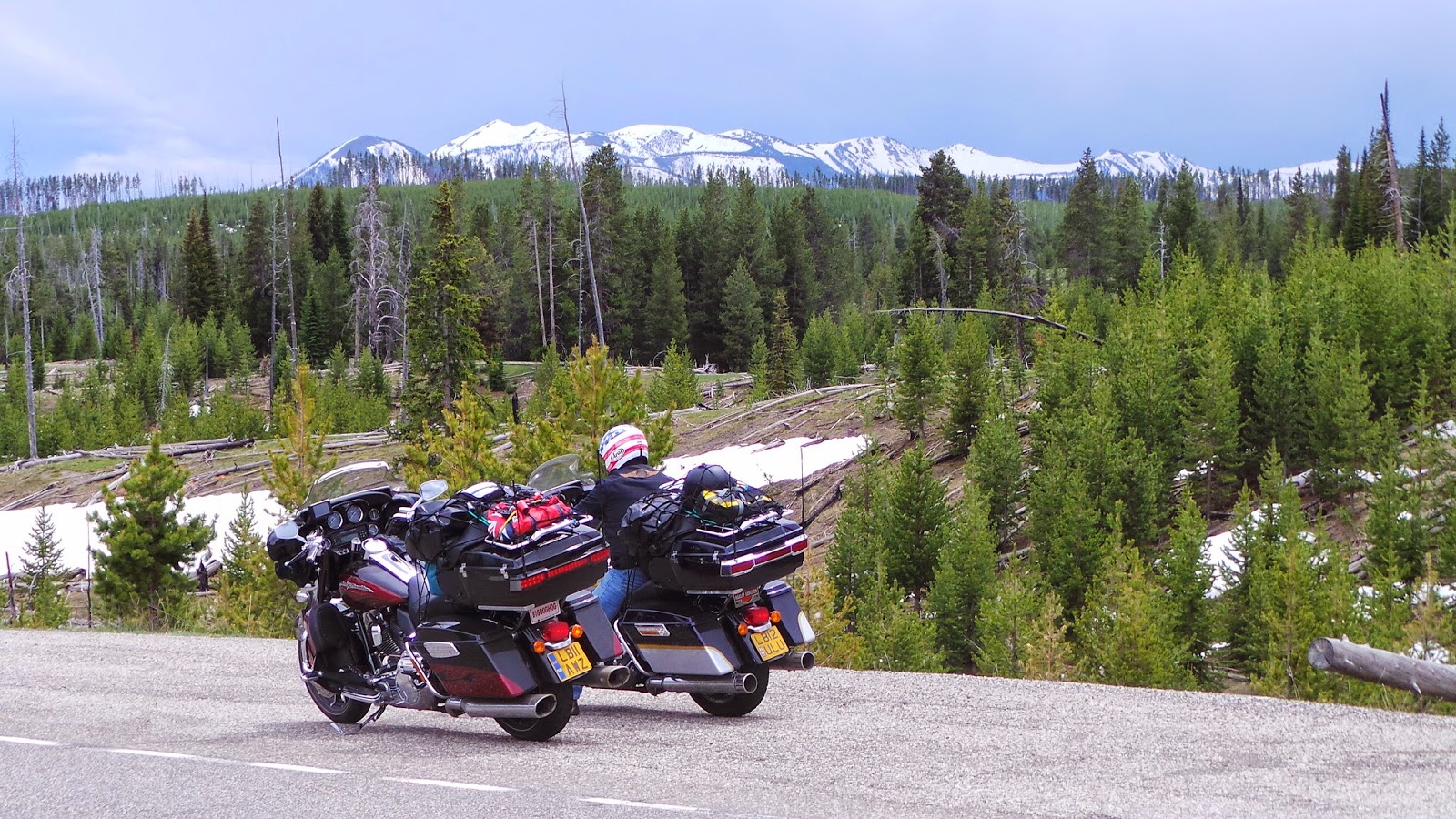 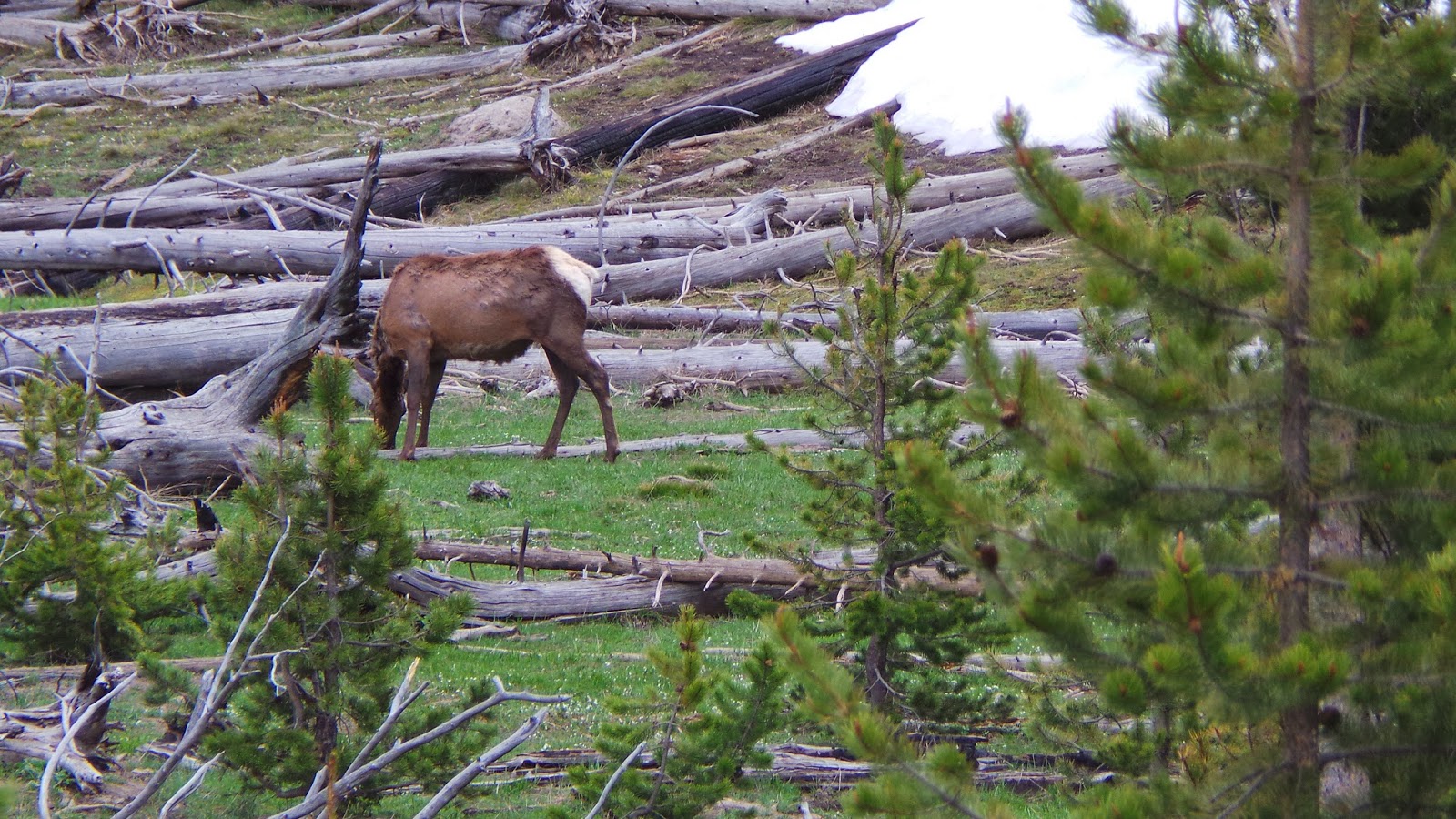 Wild Elk grazing.  These deer are absolutely huge and several miles back before these photo's were taken one ran out in front of me on the road.  We had been told to be very mindful of this risk whilst riding alongside thick forest.  The trouble is they are so well camouflaged so you only really see them once they are physically on the road!  Fortunately the road was dry and Jon and I were able to brake in time thanks for ABS.  I am not sure who would come off worse a 500Kg Harley or an Elk if they were to collide - probably the Harley - yikes! 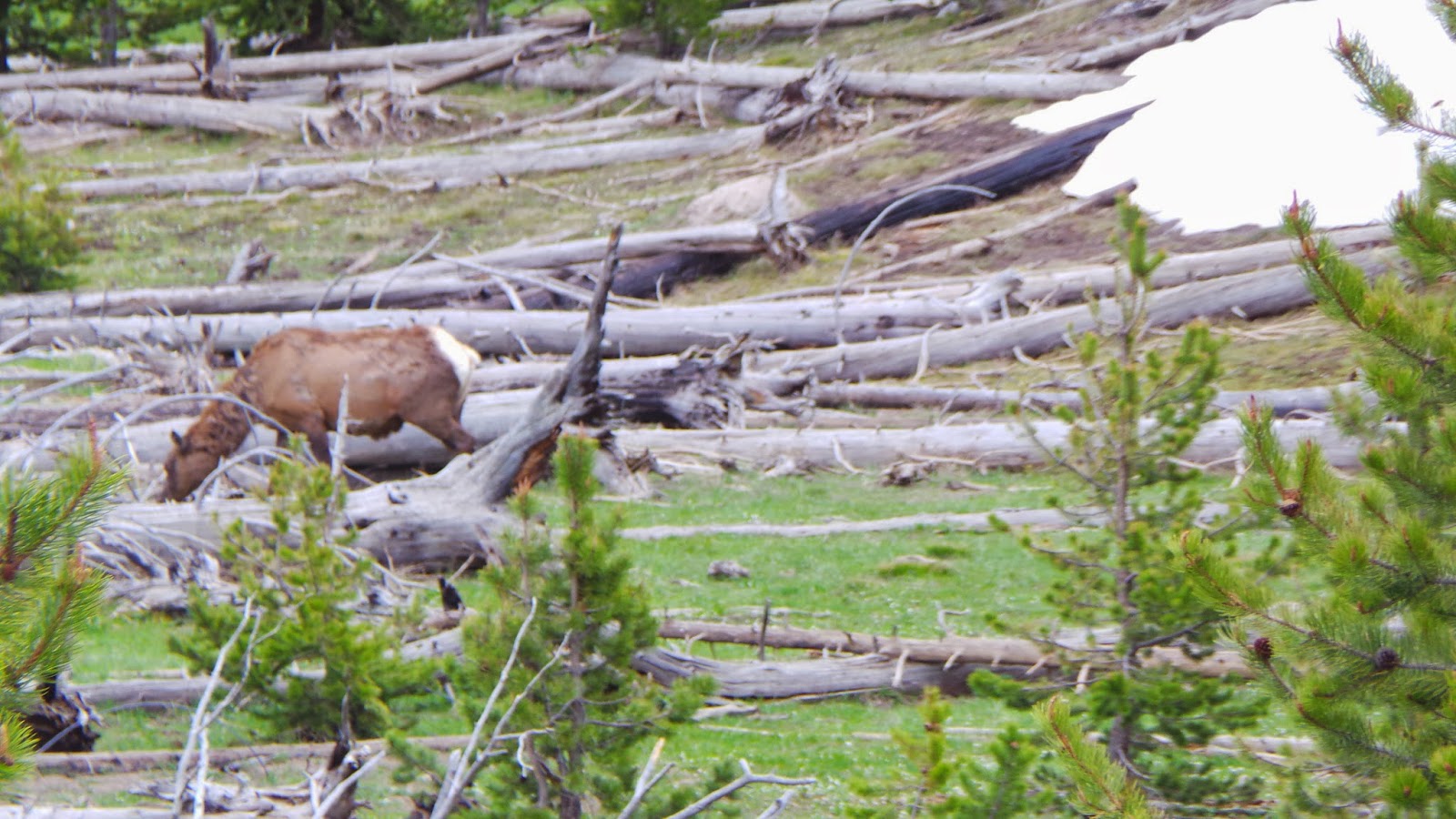 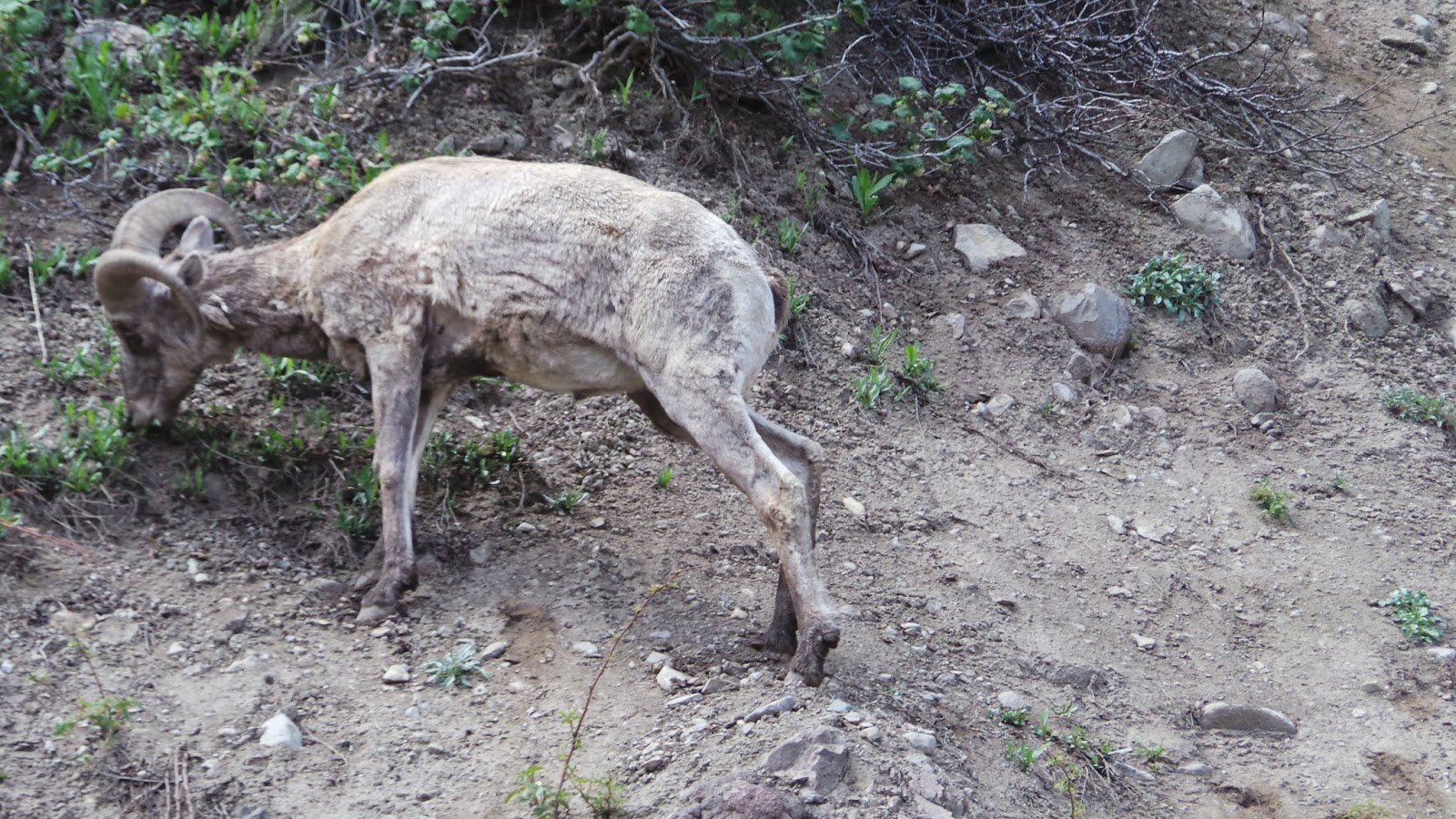 Wild Mountain Sheep spotted on the East side of the park 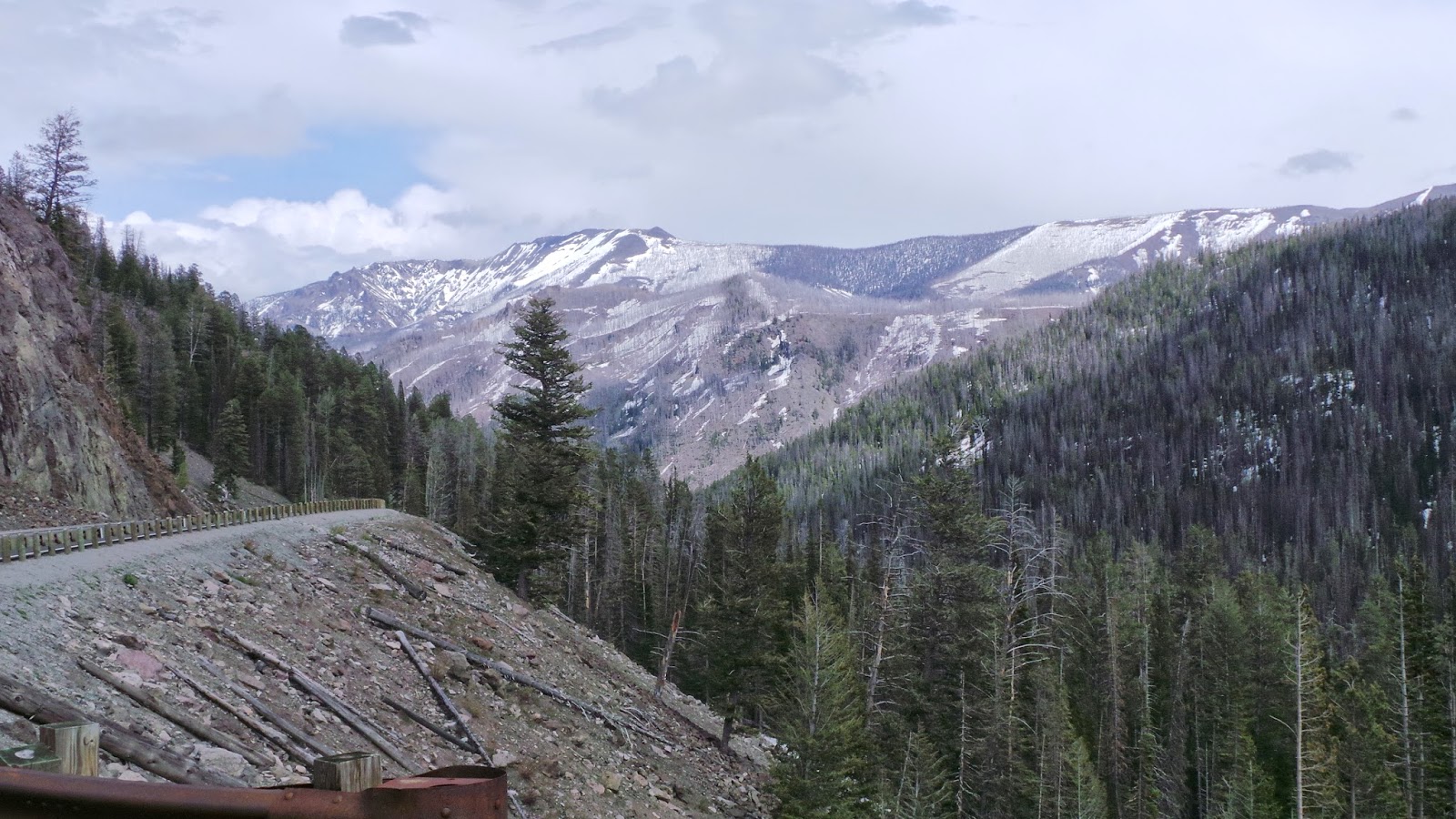 The way out to Cody and cowboy country.