On Wednesday 25th June we visited the Harley Davidson, York, PA manufacturing plant.  The significance for us was it was where our two 'touring' bikes were made.

What an amazing experience it was too.  To give you a feel for the place, take a few minutes to view the official Harley YouTube video below about the York Plant, or click on this link - (https://www.youtube.com/watch?v=ThjYcG9H3Ys&feature=kp).

We had booked ourselves on the 'Steel Toe Tour' which as the clue suggest you had to where steel toe-capped boots and high-viz jackets, plus safety goggles in order to be allowed escorted access to all the key manufacturing areas of the plant covering fuel tanks, frames, fenders and the full motorcycle assembly lines, final stage testing, and packing & shipping areas.  Our hosts were 'Ron & Don' a customer service double act, that were retired, but had spent their entire careers in manufacturing companies, but not Harley Davidson.  Unfortunately NO PHOTOGRAPHY was allowed within the factory.  Given we were close to the new launch of their 2015 Models (August) - still yet to be announced, no doubt much 'top secret' work was going on at the plant to at least build the models to be used in their Press Launches and Advertising Videos. 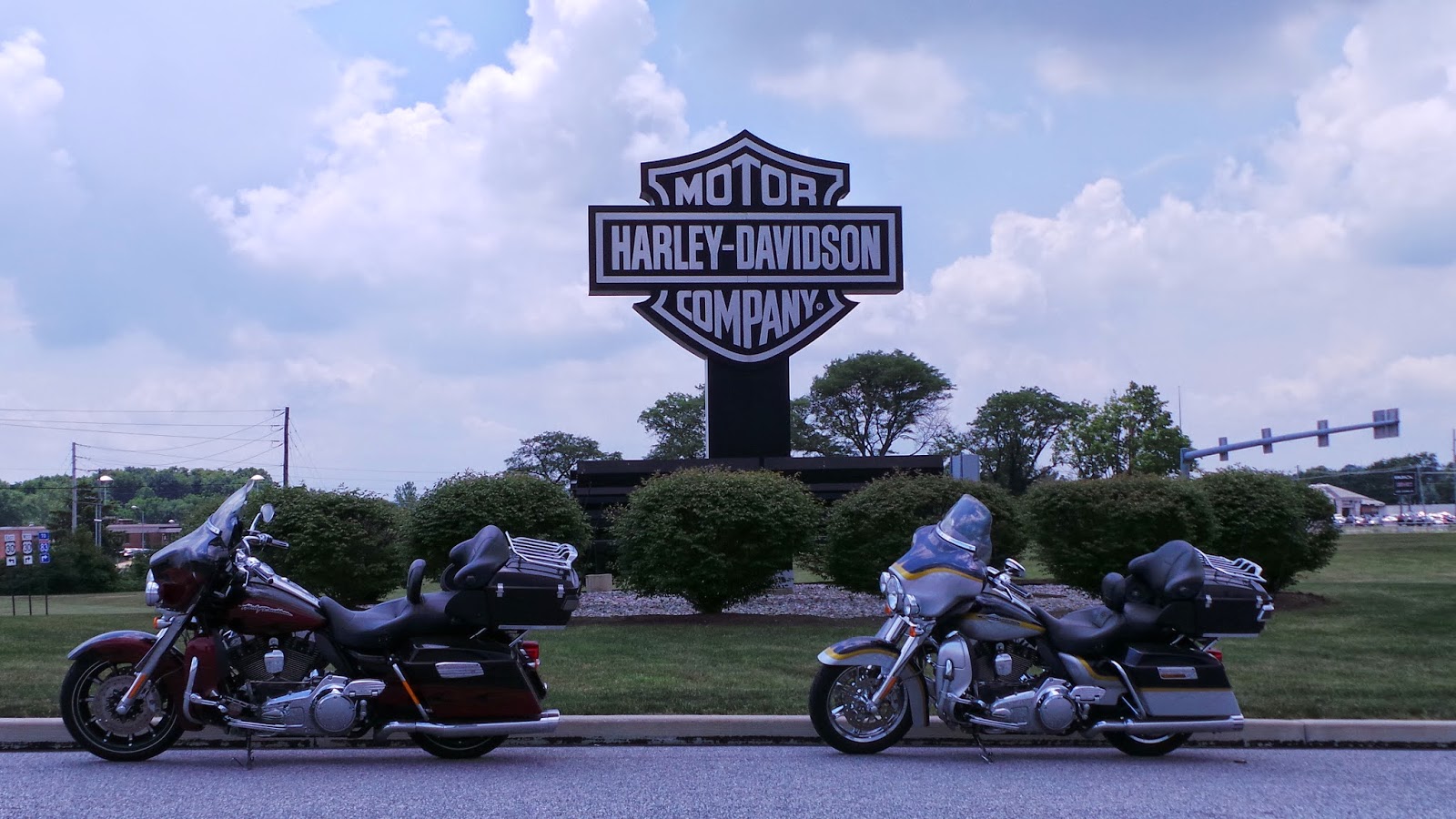 The "Home Coming" for 'B1GD0GH0G' and 'HOBO-LULU' at the entrance to the plant. 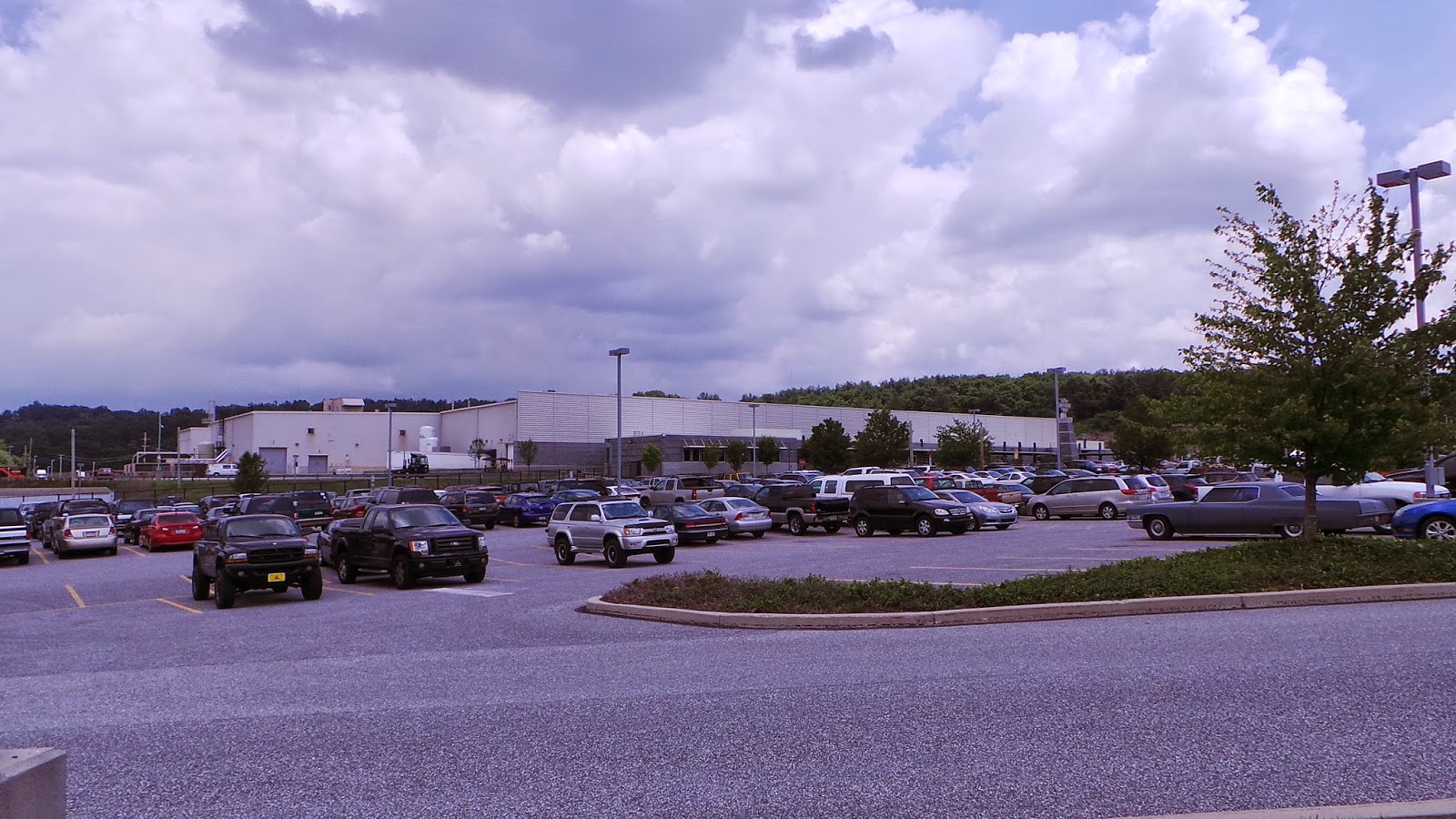 The factory, which doesn't look big but in 2013 they produced more than 260,000 Harley Davidson's from this plant. 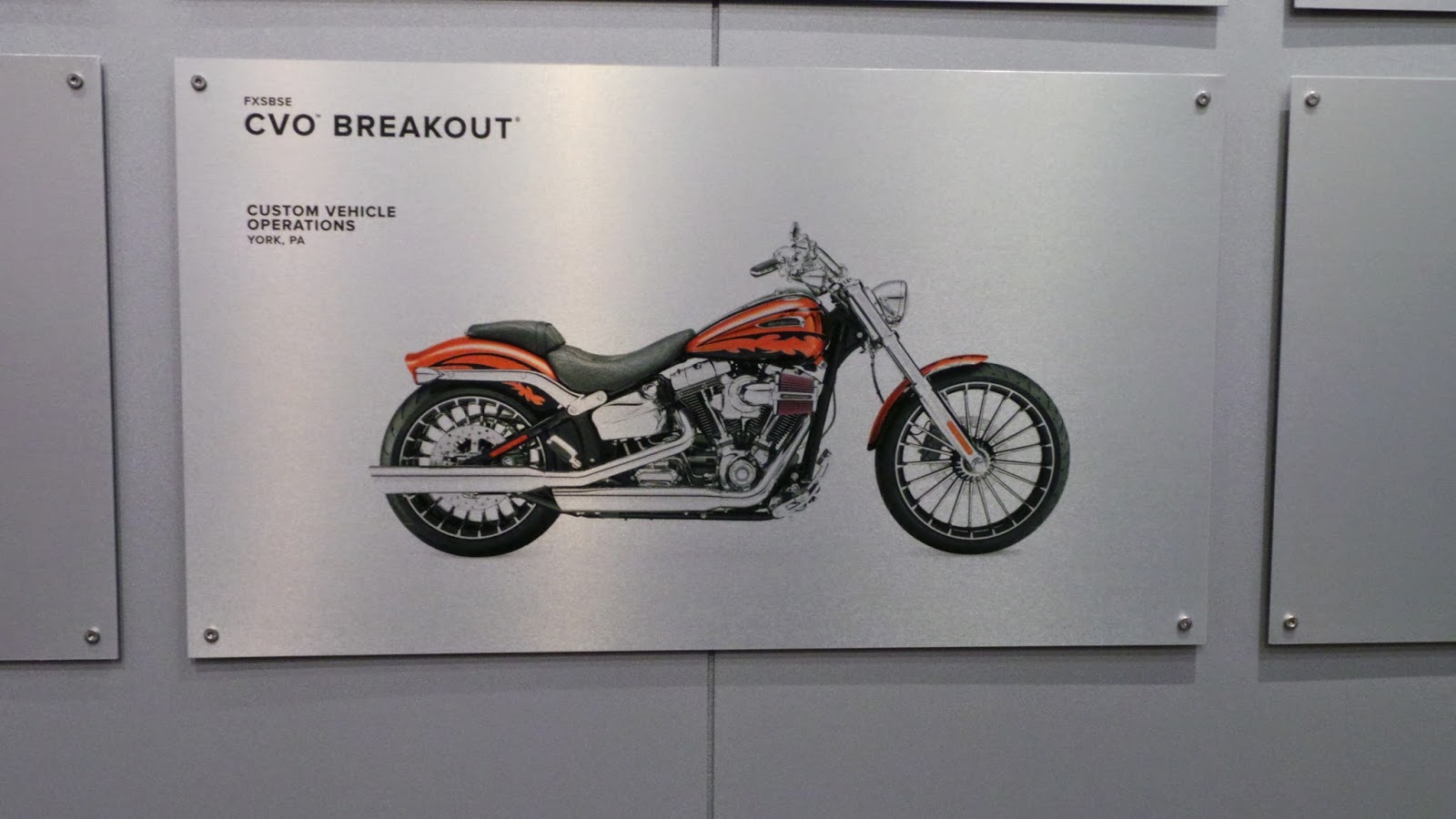 In 2014 this plant also makes the 'CVO Breakout' model which I am very lucky to have one waiting for me at home.  It took 16 months from order to arrive and frustratingly did so eight days before I left for this tour!  She's in my garage, with only 90 miles on the clock just waiting to get out and enjoy the English summertime with me  - let's hope there is some summer left by the time I get back. 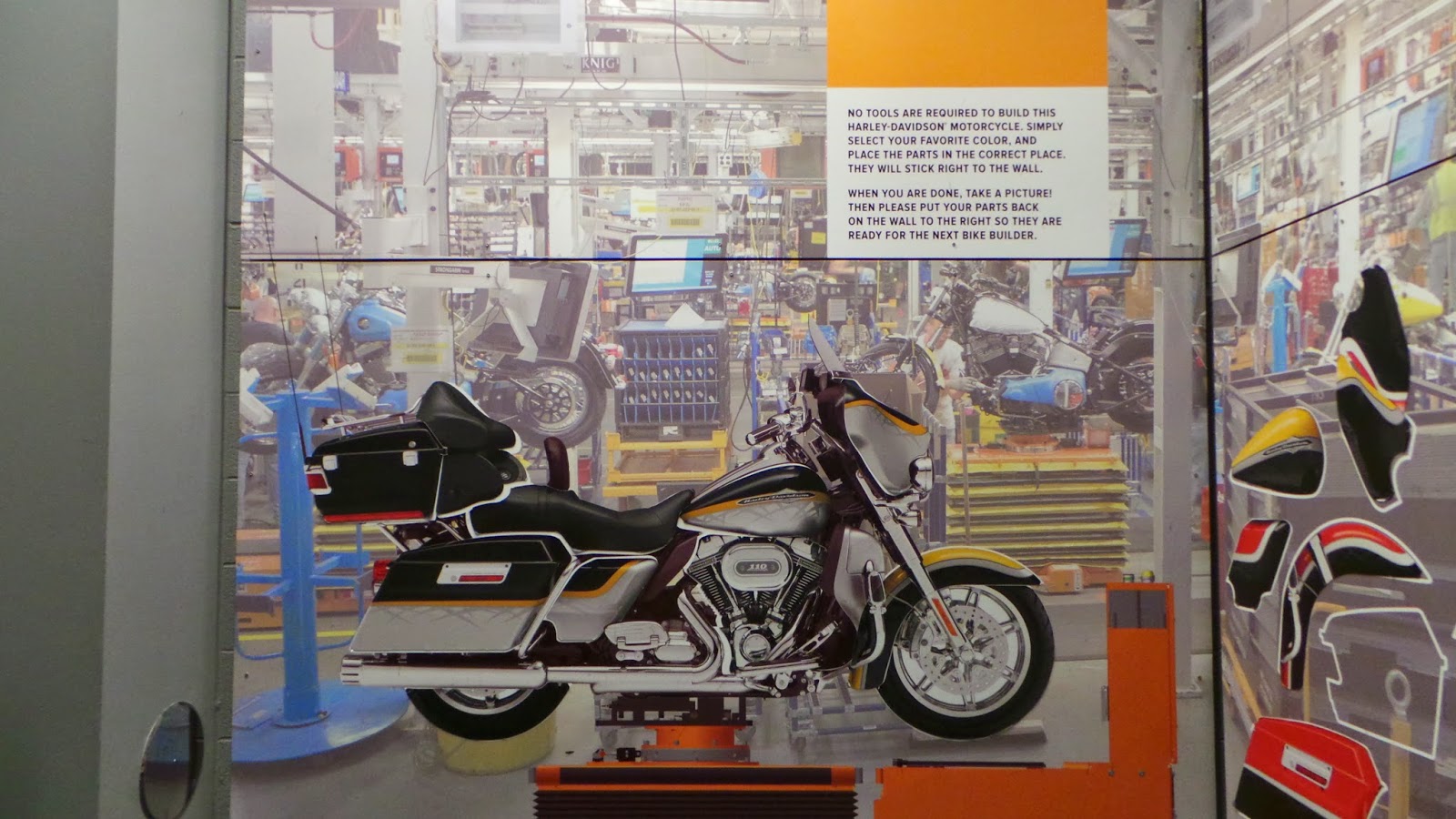 This was a wall display that allowed you to build your own bike and choose the colours from the production line choices by applying magnetic cut-outs to the basic frame .  Jon chose to build his model, with the exact paint colour scheme he has in about 45 seconds. 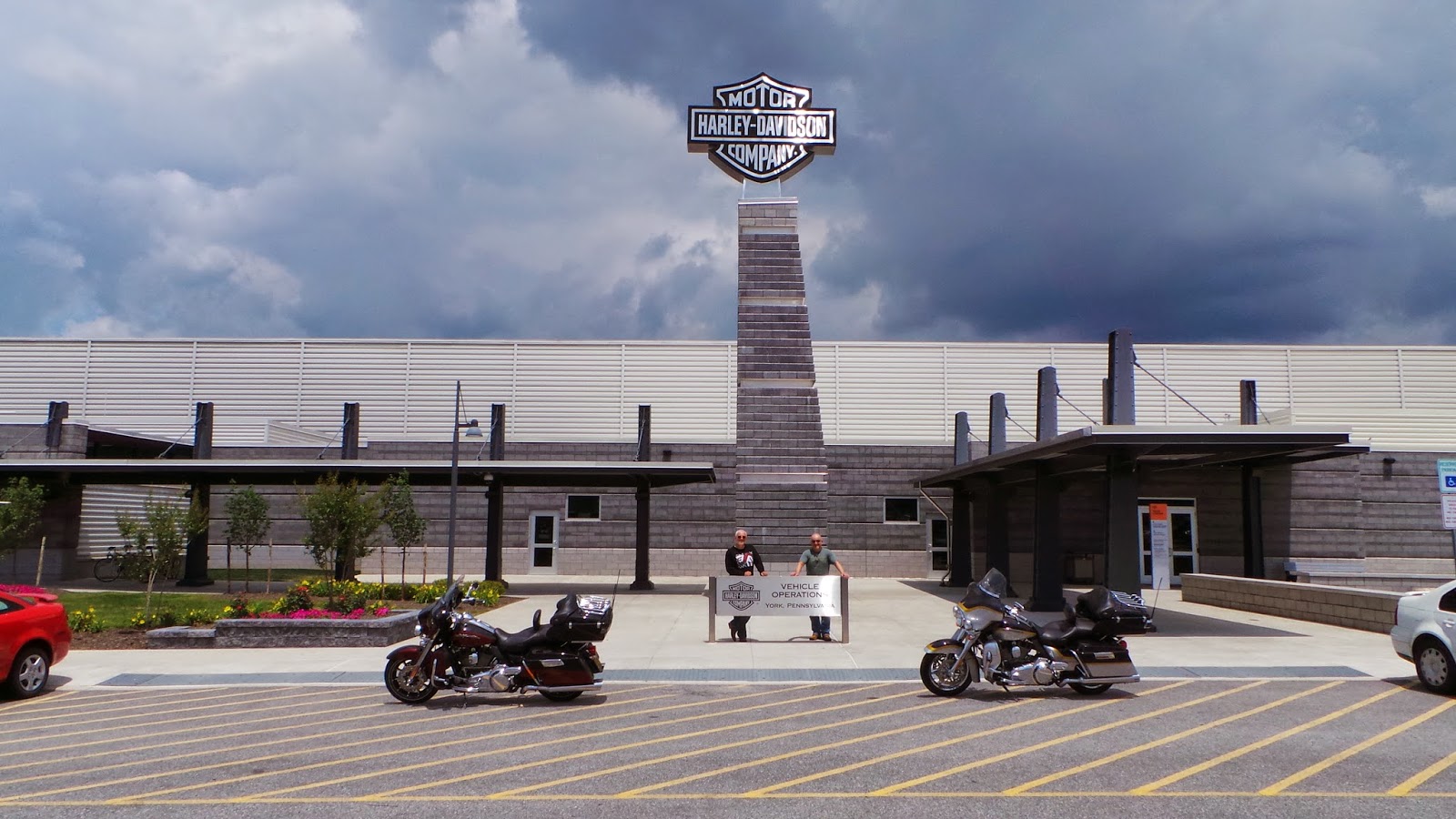 Just outside the 'Tour Centre' entrance.  This is where our bikes were 'born' their frames were stamped with their unique VIN numbers in this very building and assembled here in 2011 and 2012 - Jon thinks his was made on a Friday afternoon in 2012 given some of the small, but annoying issues he has had with it!